Thousands. Tens of thousands of the faithful have already started descending on Omaha, Nebraska. Strategic Air Command? Long gone. Berkshire Hathaway (BRK.A) , (BRK.B) ? Bingo. These are the Warren Buffett faithful. The Charlie Munger faithful. What is said here will reverberate around the financial media for days, and will invade investor thoughts for weeks.

Known as the "Oracle of Omaha", Warren Buffett has long been referred to as the planet's greatest investor. Recent performance begs to differ though, as value style investing has become far more difficult, but get this straight: We will never approach the track record over decades of performance on display here. None of us. I would like to say that I hope I am as sharp as Warren Buffett when I am 88 years old, or as bright as Charlie Munger when I turn 95, but the man in the mirror can not lie to himself, he has never been that bright, and he can only pray for that kind of longevity.

All this fluff aside, these two have some questions to answer, some situations to ponder, and probably a more concerned public than in the past to deal with. Berkshire Hathaway sports year to date performance of roughly 6.5% regardless of whether we talk the A shares or the B shares. The broader market, by measure of the S&P 500, has run more than 16%. To be fair, Berkshire has outperformed the S&P 500 over a full year. Multi-year performance shows no real winner between the index and these stocks over a number of lengthy time frames.

What About The Cash?

We heard last (Thursday) night that Berkshire has been buying some Amazon (AMZN) . Recently, the firm made big news by getting involved in potentially backing the Anadarko Petroleum (APC) deal through possibly financing the Occidental (OXY) bid, which nudged Chevron (CVX) out of the way. Should that deal close, Berkshire will receive 100K shares of perpetual preferred stock with a liquid value of $100K each (that's $10 billion), and warrants to purchase up to 80 million shares of OXY at $62.50 per. That's another $5 billion.

Somehow, my guess is that this is not the use of cash that these "faithful" shareholders want to hear about. They want to know about return of capital. To them. Berkshire sits on $112 billion in cash, and has not found an elephant-sized deal that fits their value based style for an acquisition. Rumors are aplenty. Significant increase to the share repurchase plan? Implementing a dividend payment plan? Both? Probably, I would think. Then again, I am not them, and I am not even a shareholder. Just a kid watching the tape.

What About Kraft Heinz?

The firm holds many high profile names. Investors will want to hear opinion on Apple (AAPL) , JP Morgan (JPM) , General Motors (GM) , Bank of America (BAC) , American Express (AXP) , and Coca Cola (KO) . However, those same faithful will want to hear more about the troubled holdings, the non or should I say negative performers. This means names such as Kraft Heinz (KHC) , Buffet already admitted overpaying for that one, as well as Wells Fargo (WFC) , and StoneCo (STNE) of Brazil, a new name in the portfolio this year.

Actually, I wanted to leave this section out of the piece, but there is no way to do that, even as sharp as leadership obviously is. Buffet and Munger are both most likely in the second half of their careers. In recent years, we have heard the names Greg Abel and Ajit Jain as these two individuals have risen to executive level leadership positions within the firm. There remains, however... no formal plan for succession. I certainly believe that the time has come to make these two, or whomever else Buffett and Munger might have their eye on, more public. This weekend is the perfect opportunity to get that done.

This item may in fact just be forcing a significant drag on equity performance here. They solve this, they ease shareholder apprehension over what comes next. 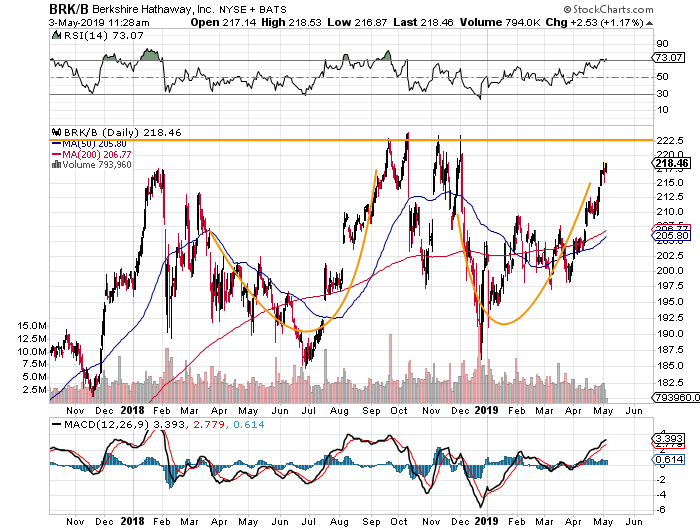 Okay. Troubled chart. Taken by itself, I would probably look at the forming cup to the right, and see cause for optimism, with a potential for breakout should the shares tackle the $223-ish level. Then again, that level has stopped this stock four times over the past eight months. In addition, I have highlighted for you a similar cup formation that produced no breakout in 2018. There is even a smaller, less significant cup in between the two.

Would I buy this stock? Technically, only if the shares take and hold that level on a retest from the upside. Fundamentally? Only if I hear something concrete on succession. It's that simple.

Get an email alert each time I write an article for Real Money. Click the "+Follow" next to my byline to this article.
TAGS: Investing | Markets | Stocks | Technical Analysis | Trading | Stock of the Day | Warren Buffett