What a week! Honestly... what a stinkin' week. I don't think I can remember feeling as worn out on a Friday afternoon, unless I had gone through a "down" week for the markets where I had also struggled in regards to keeping my P/L above the waterline. Last week, that was not the case. I had done well as had equity markets. One would think that the average trader would end such a week exhilarated. I have worn "Old Glory" on my sleeve for most of my life, and even on my skin for about half of it. Old Glory had a bad week. Individual equity indices had offered up a negative reading here or there, but after Monday's general selloff, equities for the most part found a persistent bid led by smaller to mid-cap stocks, but still broad enough to drag even the most sluggish of headline level, large cap indices a minimum of 1.5% higher. Let's dig into this a little.

"Five Fingers of Death" for more than a few kids my age is remembered as one of those now ridiculous looking martial arts movies that had us riveted at the time. Those representative of a younger demographic will think of "Five Finger Death Punch" as a contemporary rock band whose lyrics usually carry an overt message. This weekend when thinking about how to approach this morning's Market Recon column, I at least briefly thought of both.

A) That the Democratic Party would sweep the state of Georgia's two run-off elections to represent that state in the U.S. Senate? Markets sold off on the very idea last Monday. Then rallied over the next four days. Why? At least in part because increased fiscal stimulus has a better salesperson than does increased corporate, income, and/or capital gains taxes. I did not see it ahead of time, but I get it. I'd rather go to a "LA Guns" (classic line-up) show in a bar than go to the opera, bet you would too.

B) That the Covid-19 pandemic would just keep getting worse, that the spread would appear to expand unabated, while a majority of states appear absolutely lost in implementing anything resembling an effective plan for distribution. In New York and other states, even front-line medical staff remain uninoculated, which is completely unacceptable given that many times the actual number of doses given, are already in the state... for weeks.

C) That a radical group of rioters would go on to temporarily occupy the U.S. Capitol Building after overrunning the Capitol Police even after the Capitol Police had been warned by both the FBI and the NYPD about what might occur last Wednesday, and after the Capitol Police reportedly turned down offers of extra manpower from both the FBI and the National Guard Bureau. Making matters worse, this "terrorist attack" for lack of a better term followed the group being addressed by, and some might say "fired up" by the sitting president of the United States. If only the current president had read this (Market Recon) column on November 6th, he might have learned from history. Yes, we called for concession that early. That, unfortunately, is not the path he chose.

D) That the Bureau of Labor Statistics would report a seasonally adjusted reversal of job creation for the month of December. That's right. Negative job growth. Perhaps the scariest data-points within that report can be pulled from the Establishment Survey. That's where within the realm of private employment, you find growth of 120K across the retail industry (which is likely very seasonal itself in nature), and a contraction of 498K in leisure and hospitality as the pandemic keeps hotels, restaurants and bars from functioning normally.

One might think that any one of these events might plunge the nation into darkness, and cast financial markets into the abyss along with it. One would be wrong. Like a moth to a flame, investors are drawn to the idea of a massive increase to the fiscal support that had already passed and signed into law. Not just a beefed up helicopter payment to individuals, but rescue money for state and local governments. Yes, I see the long end of the Treasury yield curve. Of course traders sold the long end. Increased federal borrowing will force the central bank to monetize more and more debt.

Your munis might be in better shape than they had been, but there will be a race to borrow at the corporate level, and that central bank has promised to pin the short end at or close to the zero-bound. It is a near certainty, at least in my mind, that "the Fed" will allow the long end of the curve to flap around in something close to free-market pricing before coming to that rescue too. "Yield Curve Control" is all but certain, but probably not until, "Kool and the Gang" (Jerome Powell and the FOMC) at least test the waters for the purposes of "guesstimating" forward looking consumer level inflation expectations. That's at least how I see it. Which is one reason why the three (of 11) S&P Sector SPDR ETFs that closed out last week in the red were all defensive types.

E) That House Democrats were pressing the idea of impeaching President Trump in the wake of last week's events despite the fact that there are only days left in his term. There are reports that Speaker Pelosi is pressing Vice President Pence to invoke the 25th Amendment within 24 hours (from Sunday night) or there will be a vote at least in that chamber to move forward with impeachment proceedings. On Friday, again, here in this (Market Recon) column, the suggestion was made for the legislature to vote on moving up Inauguration Day (this one time) instead of taking on anything else that would take longer. My thoughts were more about safeguarding the nuclear "football' than anything else.

Would this last finger, the finger of federal instability... even if just for days, be enough to negatively impact financial markets beyond debt securities with longer dated maturities that have been more impacted by thoughts of stimulus than anything relative to the events taking place in Washington, DC? Equity index futures are trading lower as night turns to day.

Just thinking out loud. This Friday brings with it the unofficial kickoff of "earnings season" as JP Morgan (JPM) , Citigroup (C) , and Wells Fargo (WFC) all go to the tape with their quarterly numbers. Though I think it likely that the banks may outperform fourth quarter expectations, I move forward somewhat hesitantly as the Financial Sector SPDR (XLF) moved 4.9% higher last week, on banking strength. The KBW Bank Index ran 8.6% for the week, which while incredible can be topped. 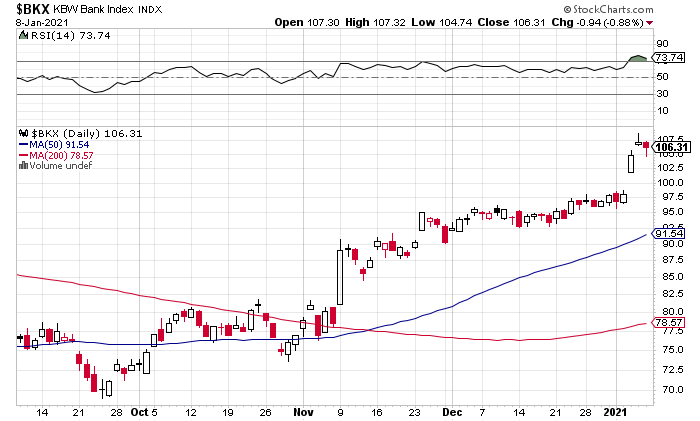 The KBW Regional Bank Index soared 9.2% for the past five day period. 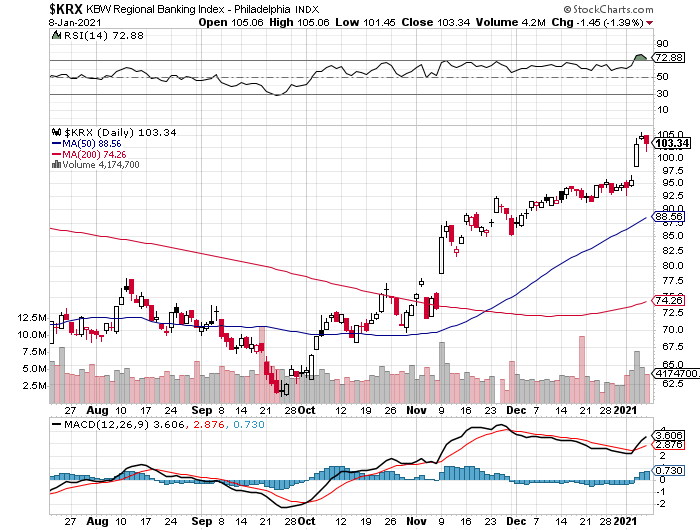 Both of these indices appear to be overbought despite a minor down day on Friday, and both leave an obvious gap that at some point is likely to fill. The euphoric move for the banks of course has a lot to do with rising bond yields at the long end. Just take a look at the (I show this to you often) U.S. 3 month/10 year yield spread for the same four month period.

Yes, the bond market is still the dog. We common equity investors/traders remain the tail. Nothing wrong with that. One must understand the beast in order to tame the beast. So, tame the beast.

Expectations for fourth quarter earnings have been improving rapidly as the S&P 500 enters this week trading at 22.6 times forward looking (12 month) earnings. The five year average is 17.5 times. That is not the big deal one might think as investors have been funneled into equity markets through policy. Simply put, equities are not as expensive as one thinks given the environment. There is however a point where debt securities will attract investment. Where that is, we do not know, and we do not know if bond markets will be permitted to go there. That said, the Energy sector now trades at 33.1 times forward looking earnings, and that is versus a five year average of 14.0 times. That is the one true dislocation I see, even accounting for changing environments.

Readers also need to be cognizant of this week's two big investor/analyst based events, both have gone virtual... First...CES (Consumer Electronics Show) 2021, which we discussed on Friday. The main event there for me will be Advanced Micro Devices (AMD) CEO Lisa Su's keynote address tomorrow (Tuesday) morning.

Secondly, but not less importantly, will be the JP Morgan Healthcare Conference. Today (Monday) alone, we'll hear from Bristol Myers Squibb (BMY) , as well as Johnson & Johnson (JNJ) , Moderna (MRNA) , Regeneron (REGN) , and Emergent BioSolutions (EBS) , all of whom are playing a role in the fight against Covid-19. Expect news released at this event to move these stocks around. Earnings pre-announcements? Possible. I want to hear when we can look forward to increased supplies of vaccines or at least some related data so we can one day get back to acting like the idiots we are.

(JPM, WFC, AMD, and BMY are holdings in Jim Cramer's Action Alerts PLUS member club. Want to be alerted before Jim Cramer buys or sells these stocks? Learn more now.)

Get an email alert each time I write an article for Real Money. Click the "+Follow" next to my byline to this article.
TAGS: Earnings | Economy | Investing | Markets | Stocks | Technical Analysis | Trading | Banking | Healthcare