Mid-June. Monday Morning. Just where are we? Headline news wants us to talk about the G-7 meetings that took place over the weekend in the UK. Seems to be progress on a few points, such as vaccines and China...at least at the wink and handshake level. Kind of like the difference between real and nominal interest rates (more on that in a bit). Kind of like agreeing to work toward cleaning up global energy production without taking any significant steps toward an increased pivot (or working toward helping developing nations pivot) away from fossil burning fuels to include coal. Story told and actual impact may not line up exactly. Hmm.

There was, however, enough unity to at least produce a meaningless to semi-meaningless "communique." On to NATO. New location. Mostly the same cast of characters. Different actor cast as a potential (or actual) villain. Know what? Market doesn't seem to care. Or does it? Getting along in the world matters. More than just in the geo-political sense. This is more than just a shift in leadership from an administration taking a more combative stance on the issues to one apparently more willing to play ball globally with traditional allies. This, from a markets perspective is a resumption of trend toward a more globalized economy. Good for some, not so good for others. Potentially very bad for the domestic lower to middle classes. One thing I think we know for sure, as do those place holders at the FOMC, would be that global geo-political posturing is a suppressive force upon both consumer level prices and prices at the producer level, not to mention the negative impacts on wage growth.

That said, the global manufacturing base will not be able to truly resume its ability to allow supply of both goods and labor to fall to the lowest bidders until the pandemic is truly beaten back nearly everywhere, with the emphasis on everywhere to include not just developing, but especially frontier economies. Until then, we are by default, at least partially protectionist in practice as nearly all developed economies for now will have to be.

The S&P 500 closed at a second consecutive closing high on Friday, up less than half of one percent (+0.41%) for the week. The Dow Industrials gave up 0.8%, while the Nasdaq Composite simply "roared" in comparison, up 1.85%. Defensive and "Growth" sectors led the way for the week, taking five of the top six spots on our weekly performance tables, Though isolated, software stocks actually ruled the roost, as pressure on interest rates chased equity allocations back into the once forsaken growth stocks. The Dow Jones US Software Index ramped 3.4% over the past five business days led surprisingly by Fastly (FSLY) , +14.9%, and not so surprisingly by cybersecurity focused firms such as CrowdStrke (CRWD) and Zscaler (ZS) , both of those names up 11.8% for the period.

All that said, though breadth appeared more than healthy toward week's end, aggregate trading volumes simply plummeted at the headline level as meme-stock trading slowed down beneath those headline numbers. Less churn? Less conviction? Less day-trading? SEC chair Gary Gensler is looking into trading activity in these names as well into cryptocurrencies, payment for order flow, dark pools and a number of other market customs that have unfortunately become commonplace as technology has replaced human decision makers at almost every level of price discovery. Speaking of cryptos, Tesla (TSLA) CEO Elon Musk is yet again moving Bitcoin through the use of his Twitter (TWTR) account, this time in a northerly direction.

The broader story, or should I say, the investment story rather than the trading environment remains focused on inflation, labor markets, potential economic growth, and interest rates, all impacted directly through both monetary and fiscal policy and not just domestic policy. This is where there is clearly foreign impact.

Readers already know that the May CPI hit the tape a bit hot, up 5% year over year at the headline, and 3.8% at the core. Last week we also learned that the Conference Board now projects 9% (annualized) second quarter growth for the U.S. economy, and 6.6% growth for the full year 2021. So, economic growth appears to be hot, as is consumer level inflation. Yet, the U.S. Treasury yield curve did its impression of a "swan" dive. This chart illustrates the spread between what U.S. Treasuries pay over 90 days versus 10 years...

We do see the U.S. Ten Year Note paying more than 1.46% early on Monday morning, up from less than 1.43% on Friday. Perhaps a little profit taking? Perhaps.

Could it be that bond traders are buying the Fed's "transitory" narrative on consumer level inflation? Could it be that bond traders are not buying the economic growth story over the second half of the year? Could it be both? With almost 9.29 million (a record) job openings across the nation as of April, according to the Bureau of Labor Statistics? This is why all eyes this week (Don't you just hate that term "all eyes"?) might be less on Tuesday's (tomorrow's) Retail Sales and Industrial Production numbers for May than one might think and more on other data-points such ad Tuesday's May PPI and Wednesday's May Import and Export Prices.

I mentioned Wednesday. The focus turns to the Fed but not so much toward any immediate expectation for a shift in policy, or even toward the question and answer session. As those of us who follow these Q&A sessions know all too well, many of the questions asked do try our patience, not to mention our intelligence. There are a few economic journalists who do stand out though. Perhaps the questions should be submitted after the statement, but ahead of the press conference. Chair Powell could then just answer the five or six that actually matter.

Do Not Expect Much

I expect little in the way of change in expectations for coming consumer level inflation. Not that I don't feel that some of this current inflation can not become structural. I feel that the FOMC feels differently, and they will have the evidence they need to support their aggregate belief. For one, the truly hottest areas of this May CPI report were from corners of the economy that are indeed likely transitory, created through supply chain constriction and complicated through shortages of labor supply. Even those of us who upon occasion might be prone to take cheap shots at the Fed (hand raised) must admit this.

Then there's the Cleveland Fed's median CPI. Never heard of it? Trust me, every kid sitting at the FOMC table is glued to this indicator. The Cleveland Fed produces each month a median CPI and a 16% trimmed-mean CPI. The feeling is that through the process of omitting monthly outliers and focusing on the center of the price change distribution curve these two measures can provide better signaling of inflationary (or disinflationary, deflationary) trends than can either headline or core CPI in the way that the data is reported.

For my graduates of Economics 101, welcome to Economics 102. In other words, this part is for the new to semi-new kids. Median CPI is the one month (year over year) inflation rate of whatever component is found at the 50th percentile of this distribution. The 16% trimmed-mean CPI is a weighted average of all components falling below the 92nd percentile and above the 8th percentile. Simple enough? Now check this out: 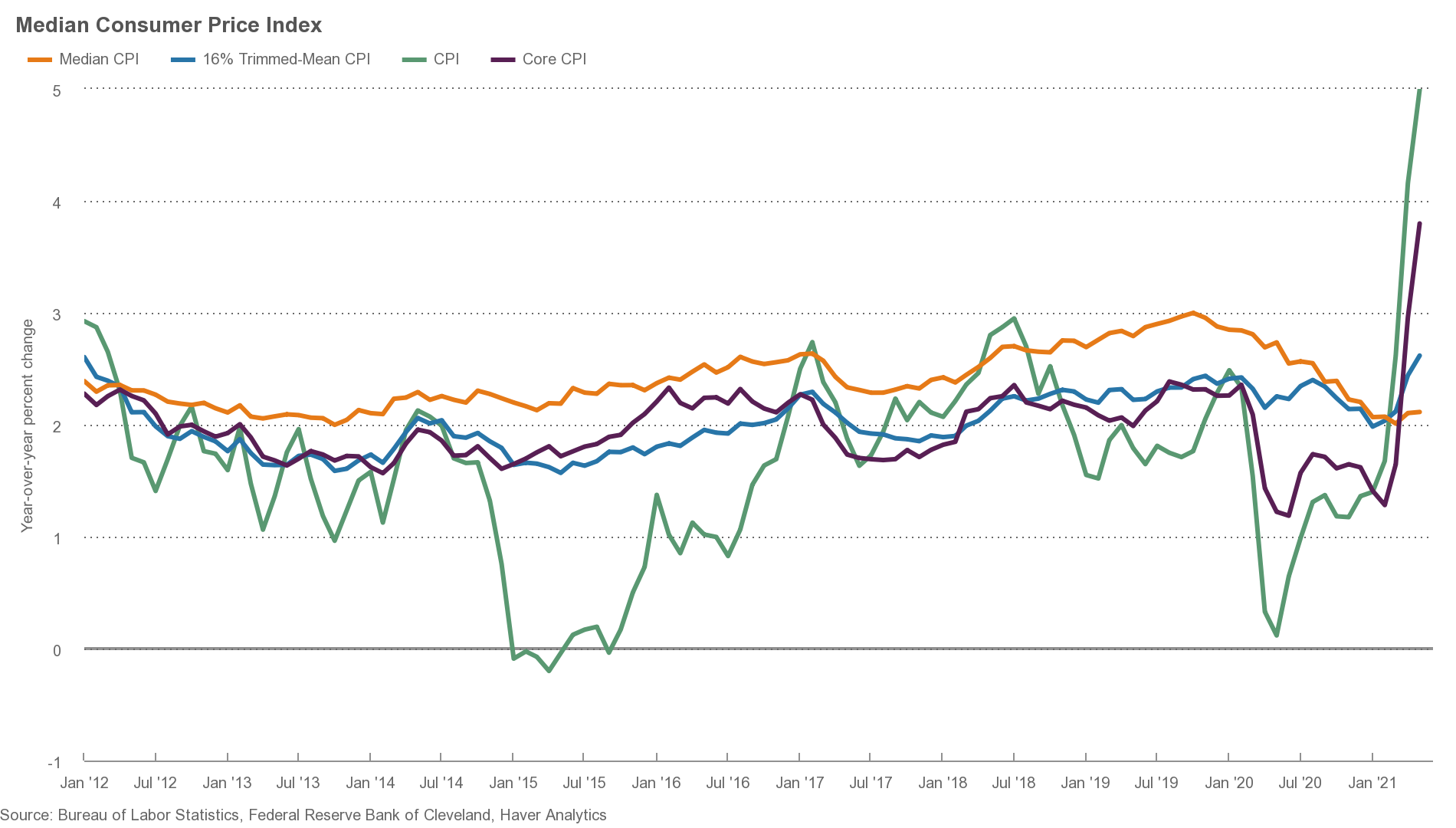 This chart is taken directly from the Cleveland Fed's website. The Cleveland Fed sourced the BLS. In case it's a little tough to make out, the green and purple lines represent headline and core inflation that spiked in May up to 5.0% and 3.8%, respectively. The blue and yellow lines represent Cleveland's 16% Trimmed-Mean CPI and Median CPI respectively. Those rates of inflation for May printed at just 2.6% and 2.1% in that order. In fact, year over year median CPI hit 3.0% as recently as October 2019, and has not come close since. Oddly enough, this chart, which will be used by the Fed as evidence of the transitory nature of current domestic inflation, also shows that at no point since January 2012 (the length of the chart), has median CPI gone below the Fed's 2% inflation target. Apparently, this chart does not always matter.

As investors we also know that foreign accounts have been placing downward pressure on the longer end of the U.S. Treasury yield curve. (Meaning, they are buying the snot out of U.S. paper.) At market's close this Wednesday, the Treasury Department will release its data for April Net Long-Term TIC Flows. Perhaps nothing released this week will impact debt markets, and consequently equity markets more. Too bad the data is so dated.

What we know is that in March, net investment into the U.S. from elsewhere added up to a very robust +$262.2 billion, to include +$118.9 billion in bond investment. This positive turn in bond investment put a halt to a three month losing streak (net outflow) for the U.S. Just judging from what Treasury markets seem to be telling us, both in terms of yield and in the recently published results of competitive auctions, foreign appetite for nominal U.S. yields that may be very real yields to those investors continue to grow quite voraciously.

No significant domestic macroeconomic data-points scheduled for release this day.

No significant quarterly financial results scheduled for release this day.

Get an email alert each time I write an article for Real Money. Click the "+Follow" next to my byline to this article.
TAGS: Economic Data | Federal Reserve | Interest Rates | Investing | Markets | Politics | Stocks | Technical Analysis | Trading | Treasury Bonds