Monday morning. Where do we stand going into this new week? Foreign markets and U.S. equity index futures markets have traded higher overnight. We'll get to that shortly. Markets measured at the headline level have continued to make new highs, after a series of stutter steps, all while leadership has continued to narrow. The talk over the weekend, or at least the early part of the weekend, had been all about record highs for the Nasdaq Composite and S&P 500 driven "generally" by mega-cap tech names, but even that word "generally" is a little broad. The markets have been driven really by a sudden (sudden as in weeks, not minutes) realization that especially Apple (AAPL) and Tesla (TSLA) had been somehow under-owned at the professional level. Makes some sense, with both of those names in particular splitting shares, as that does at least begin to address the market-wide issue that scarcity of equity had become. Who's next became the question many asked? Amazon (AMZN) would be my guess. Still just a guess, and I am long that name. You don't have to have a ton of education to speculate.

It is true though that mega cap, mostly tech names have only been able to drag a minority of individual issues with them to the upside. This does not signal coming weakness. This does not signal anything in my opinion. It just means that as certain names grow in market capitalization they then become more significant in leading the performance of that given headline market index, as that's how our most followed indices are weighted. Underperforming your benchmark this year? I know that does not feel very good, but from an ego feeding perspective, you may be more diversified than that benchmark is itself. You might be beating the market without beating your benchmark. Got me?

On Friday, 220 of the S&P 500's constituent member issues closed higher. That was better than Thursday. Both days were officially "up" days. In fact, at the New York Stock Exchange, losers beat winners on Friday almost two to one, while declining volume decisively beat advancing volume. In fact, just about the only positive takeaway I have after scanning the NYSE's data for the day, would be that trading volume itself decreased ever so slightly on what without knowing better, looks like a "down" day. Same story up in midtown. At the Nasdaq Market site, losers also beat winners almost 2 to 1. Declining volume also handily beat advancing volume. Trading volume at the Nasdaq (more optimistically?) dropped off more dramatically from Thursday to Friday at the Nasdaq than it did at 11 Wall Street.

It has been spoken of and written on often across the realm not since this awful coronavirus first started having a negative impact on all of our lives, but since the aggressive recovery in equity markets became quite evidently more robust, particularly in June and beyond. We have harped on the fact that historical valuation metrics were quite useless in a never seen before financial environment. Still, you will read here and there, quite educated, and quite intelligent (and well known) financial pundits who do not understand how this works. Such is life. Either they do not understand, or they have something to sell.

The fact is that at the headline, equity market performance is not reflective of the uneven, both in depth and velocity of the economic rebound in the U.S. Beyond those headline indices, however, the equity market recovery is just as sloppy in performance as the economy itself. The Dow Transports have gained back quite a bit, though still underperform the two large cap indices that most follow closely. Sure, that index is narrow, and highly specialized. However, the economy goes nowhere without the transports, nor the banks. Yeah, how are the banks doing? Better not look. Okay, go ahead, the group is a mess. Now broaden the scope, but downsize in market cap. The S&P 400 (mid-caps), as well as the small cap indices (Russell 2000, and S&P 600)? Survey says: BZZZ !! Still better than the banks. The banks can not recover until investors know that their debtors are in okay shape. Understand? Then, once that condition is satisfied, the group is valued based on net interest margin... even if they invent a hundred other ways to profit. Now, you know why nobody paying attention is overweight the banks. Just a fact of life. For now. Everything changes. Sometimes you don't see it coming.

The markets have not been wrong. The narrowing market success is precisely representative of narrowing economic success. Just last week, every one of you saw some red hot housing data for July hit the tape. You also saw key regional manufacturing surveys represent businesses that continued to grow in August, but appear to have taken a sideways bent. Then there was the employment picture. An unwelcome rebound in claims for jobless benefits. Can a less than confident household drive consumption?

Last week (using select sector SPDR ETFs as proxies), the Tech sector (XLK) ran more than 4%, easily outperforming measures that single out either semiconductors or software. AAPL screamed 8.2% higher over five days. Apple is considered hardware, though investors value the brand as a software subscription type business with a hardware driven, captive customer base. Consumer Discretionaries finished in second place for the week at +1.8%. Autos, yes autos easily led once that performance is broken out by industry. Tesla gained more than 24% for the week.

This is not rocket science. What this is... is what uncertainty looks like. Understand this now, so you don't get shaken out at the time. At a market cap of $2T+, when "they" do take profits in AAPL, the Dow, the S&P 500, and the Nasdaq Composite will all sell off, perhaps sharply, even if broader equity markets have a good day. Bear in mind that while yes, fiscal policy has provided short-term support to the economy, and the monetary policy has funded that effort at little cost while ensuring that the plumbing works. While this effort had been grand in scale, it has not been able to, and can not lift all boats equally, or even lift all boats. There will be more financial casualties.

We did mention above that markets were stronger overnight. President Trump made an announcement on Sunday evening. The Food and Drug Administration had authorized use of convalescent plasma taken from recovered Covid-19 patients as treatment for those seriously ill with the infection. What this does is waive some regulatory requirements involved in making use of certain medical products that are not yet fully FDA approved. Limited studies show that hospitalized patients not requiring ventilation may show as much as a 35% improvement in survivability 30 days after receiving the plasma, if received within three days of diagnosis. No magic wand. Just positive development.

At almost the same time, the Financial Times ran a story suggesting that the Trump administration might be considering fast-tracking the Covid-19 vaccine being collaborated on in the UK by AstraZeneca (AZN) and Oxford University based upon a somewhat small trial if successful. That study included 10,000 volunteers, whereas the standard set in this country calls for 30,000. There has been no official comment made regarding this possibility as far as I can tell. You did see the news on Friday that Pfiizer (PFE) and BioNTech (BNTX) could have a vaccine ready for regulatory review as soon as October. Financial markets are starting to feel like something is close.

Short interest continues to drop. According to data published at Goldman Sachs, which I read in the Financial Times, such interest as a proportion of market cap for the median stock in the S&P 500 has fallen to 1.8%. This would be the smallest this percentage has been since Goldman started tracking this data in 2004. The 15 year average runs at about 2.4%.

Maybe. Johnson & Johnson (JNJ) , another vaccine name, the one looking forward to a global trial including 60,000 volunteers, may be on the verge of a technical break-out. 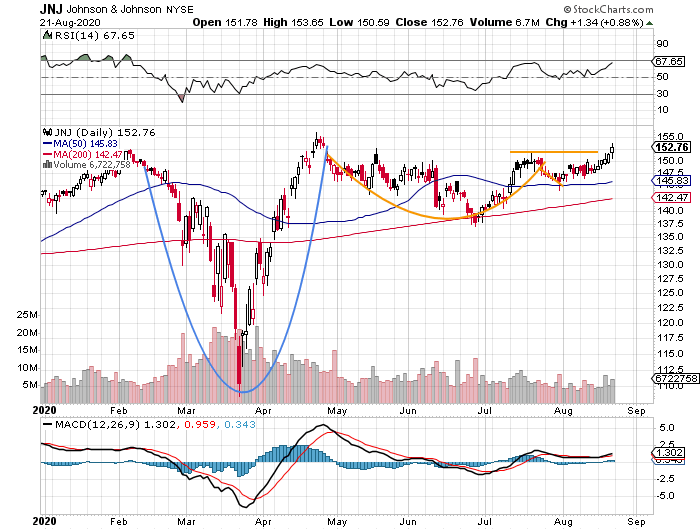 Readers will see the blue cup created last spring. There is really no handle there, and there was no breakout created at that time. Since, we have a rather shallow "saucer" formed in orange that lasted from May into July. This saucer has created a handle, with a pivot point just below $152. That spot was taken on Friday. Can it hold? Will it hold? I have increased my target price for JNJ to $184 from $174 based on the new pivot. At the same time, I am increasing my panic point from $133 to $143.

(Apple, Amazon, and Johnson & Johnson are holdings in Jim Cramer's Action Alerts PLUS member club. Want to be alerted before Jim Cramer buys or sells these stocks? Learn more now.)

Get an email alert each time I write an article for Real Money. Click the "+Follow" next to my byline to this article.
TAGS: Economy | Investing | Markets | Small Cap | Stocks | Technical Analysis | Trading | Banking | Coronavirus