I am not going to lie to you. This week will tax your brain. Your ability to focus on what really matters will be tested. By Thursday, maybe sooner... you will be ready for the weekend. Not like for those in other lines of work where going into a day off or a weekend, one seems mentally ready ahead of time. More likely you will have to use every last bit of discipline you have in your personal bag of tricks just to stay locked in through Friday as your brain will grow tired and your willpower will ebb. This is why our industry is full of varsity athletes and military veterans. No way you can do this, if not naturally competitive.

Now there will be pressure placed upon U.S. equities from abroad, as that capital seeks out perceived safety, not to mention, positive nominal yield in U.S. Treasury securities. At zero dark-thirty on Monday morning, markets were pricing in several moves made by Mainland China's government in Beijing. First, Beijing announced on Friday new rules barring "for profit" tutoring in core school subjects. This is a $120 billion business in China, and the new rules also restrict foreign investment in that sector. There are also media reports that the PBOC (China's central bank) has ordered lenders to increase mortgage rates for first time home buyers, which would obviously have an impact on the Chinese economy. Remember, it's about power over there, not money.

As if that was not enough, the Chinese delegation kicked off high-level talks with the U.S. in Tianjin by lashing out at their guests. Vice Foreign Minister Xie Feng basically made two lists of demands that were submitted to U.S. Deputy Secretary of State Wendy Sherman. The first list was a set of grievances or "U.S. wrongdoings" that must stop. The second list contained "key" individual cases. Xie referred to U.S./China relations as being at a "stalemate." There will be more news later as Sherman is scheduled to meet with Chinese Foreign Minister Wang Yi on Monday.

Elsewhere, Germany's IFO Business Climate Index surprised to the downside for July when an increase was expected, while Japan's Markit Manufacturing PMI Flash also disappointed. In both cases, the resurgence of the pandemic took the blame. This would obviously have overt global implications.

(Remember, bond yields move up and down inverse to price, hence lower yields reflect demand, higher yields... distribution. It gets tricky, and reverses how novice investors see or describe support and resistance. I even hear supposed "pros" screw this up everyday.)

Earnings appeared to outweigh both the spread of the virus and concerns over the future of both monetary and fiscal policy last week. At least at the headline level, U.S. equities went out with a four day winning streak. The media loved pointing this out over the weekend although we all know that Thursday was weak almost across the board, and that breadth was rather weak on Friday as well.

Nearly every single U.S. equity index, regardless of cap size, worked their way higher for the week, with the big two... the S&P 500 and the Nasdaq Composite both closing at all-time highs. The Dow Jones Utility Average was the lone downside outlier, as nine of the 11 S&P sector select SPDR ETFs closed in the green led by "growth." Communications Services (XLC) experienced a 3.26% increase for the week, led by media and the internet, while Technology (XLK) gained 2.81% led by semiconductors and software.

Second quarter "Earnings season" really is off to a terrific start. According to FactSet, with 24% of the S&P 500 in the books, 88% have posted an upside earnings surprise, while 86% have done so on the revenue side. This performance, sticking with FactSet, has dragged the blended rate of earnings growth (results & expectations) for the second quarter up to an incredible 74.2%, up from 69.3% last week with just 8% of the S&P 500 having reported. The standout performance has forced analysts to up their full year projections to a consensus of 38.9% earnings growth on 13.3% revenue growth.

Very interestingly, at the same time analysts have reduced full year 2022 projections to earnings growth of 10.3% on revenue growth of 6.7%. Yes, interesting, but impactful? Not at all. What does anything to do with 2022 full year expectations have to do with reality for a crew that will not even be close for the just completed quarter when all is said and done. Might as well be you and I picking numbers out of a hat.

The week ahead has to be divided into segments.

This week is the gauntlet with a literal plethora of high profile corporations reporting including the "Big Six''... Facebook (FB) , Amazon (AMZN) , Tesla (TSLA) , Microsoft (MSFT) , Apple (AAPL) and Alphabet (GOOGL) . There are, in fact too many names reporting Tuesday through Thursday to properly list the highlights as hundreds of names will report each day. Be realistic, you will not be able to keep up with every earnings call. Pick one for each evening and read the highlights for the rest. Otherwise you will burn out. Trust me on that. Been there. Done that. Too often.

After this morning's June New Home Sales, the action just starts to get hot, with the Census Bureau releasing June Durable Goods Orders on Tuesday morning, the first look at Q2 economic (GDP) growth due on Thursday morning, followed by personal income and outlays for June on Friday. Within that data, we will see June data for PCE and core PCE, which the Fed likes to focus on more so than CPI, as it generally runs a little cooler than the CPI and allows for more flexibility in timing. (This does nothing for you, the U.S. consumer.)

The talking heads were out and about on Sunday, hitting the news show circuit. Dr. Anthony Fauci, who has served both the Trump and Biden administrations as Director of the National Institute of Allergy and Infectious Diseases, and chief medical advisor to the White House stated, "I'm not sure if it would be the worst case scenario but it's not going to be good." Fauci added, "We're going in the wrong direction." in his appearance at CNN. Fauci spoke on possible dimunation in protection over time in discussing breakthrough infections and the possibility of moving ahead with inoculating children as well as booster shots for the vaccinated.

Two former Trump administration medical professionals also spoke. Dr. Scott Gottlieb, who has served as Commissioner of the FDA prior to the pandemic and currently serves on Pfizer's (PFE) board, said, "It's easier for this Delta variant to overwhelm low antibody levels and that's why we were considering whether or not some people might need boosters" on the CBS show "Face the Nation." In addition, Dr. Jerome Adams, former Surgeon General, spoke on a politically controversial subject, also at CBS... "They're going to find that they have no choice but to call on more people to mask."

The FOMC will try to sit on their hands for at least one last time this Wednesday. While even the lay person can see that the central bank should have stopped buying mortgage backed securities six months ago, we'll have to wait longer. I expect that the door will be left wide open however to set the stage for a change in demeanor at Jackson Hole in late August that will potentially set the table for a slow withdrawal of excessive stimulation at the September policy meeting.

The Senate is apparently dotting the i's and crossing the t's as they close in on passing the sub $1 trillion bi-partisan infrastructure bill. Unfortunately, over in the House, Speaker Pelosi backed by the extreme left of her party, is at least sounding committed to not voting on this infrastructure package unless it is tied to the $3.5 trillion social spending package that is far more contentious and far more partisan in where the divide is. This is the one area among the five where there is both the highest potential short-term equity market reward, as well as the greatest potential for market disappointment.

Did you kids catch the action in Roku (ROKU) on Friday? The stock closed up $53 (or 12.6%) to close at $473.65. The shares are down small from there in very early trading. News? No. ROKU reports on August 4th, so it's not earnings related. Well more than 200% of the daily average volume traded in the equity. 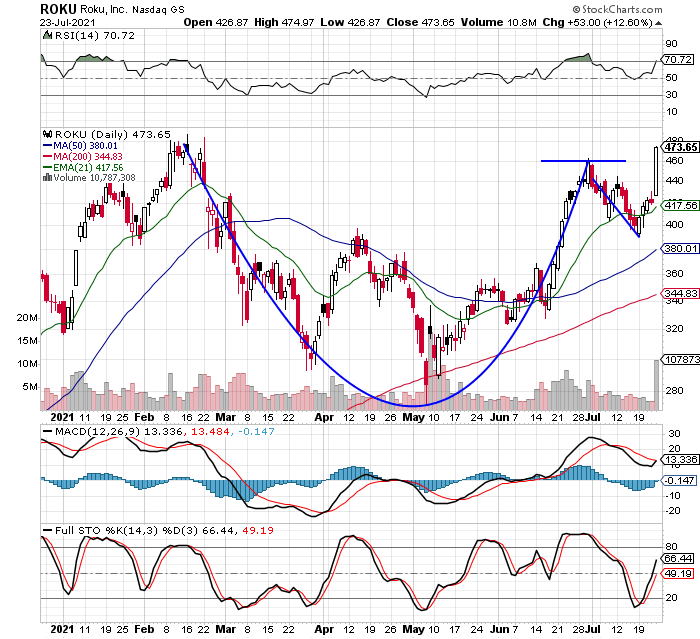 Readers will note that on Friday, the shares soared past a $463 pivot, completing a cup with handle pattern set-up. If this move can be trusted (of this I am not sure), that would place a target price for the shares up around $555 conservatively.

So what gives. Unusually bullish options trading activity is all I can find. While I can find many instances of calls expiring this Friday (July 30th) trading at far higher volumes than there is open interest, that can be rare, but it is not really that unusual. Yes, the $450 calls traded at a volume of >9K contracts despite open interest of >2200 contracts. The $500 calls saw trading volume of almost 12,500 contracts on open interest of just 217 contracts. That is nuts, but traders can do that, especially high frequency algorithmic traders. That product went out at $6.85 on Friday, up $6.12 on the day.

The oddity, or so as I see it, was out in January 2022. The January 2022 $450 calls saw trading volume of 628 contracts on open interest of <2K contracts. No other put or call for this stock for that month even comes close to this kind of activity. In addition, those calls closed at $84, up $32.15 on the day. This means that whoever is buying these calls needs the underlying shares to close anywhere from $482 to $534 (give or take, I don't know their average price or even if this was one buyer) at expiration if the calls are still held in order to break even. That's one heck of a bet.

Get an email alert each time I write an article for Real Money. Click the "+Follow" next to my byline to this article.
TAGS: Earnings | Economic Data | Federal Reserve | Interest Rates | Investing | Markets | Stocks | Technical Analysis | Trading | Coronavirus