I kept hearing the word "boring" or the term "no surprises" in the wake of the FOMC's policy statement, economic projections, and press conference on Wednesday. I just don't quite see it that way. Sure, equities rallied somewhat throughout the afternoon hours. Think that was the Fed? Think that was the well delivered meet and greet with the financial media? I know, "the economy is in a good place"... yada yada yada. As if practiced in front of a mirror.

So a Fed that on the surface simply left policy in it's place inspired investors to rush into the long end of the Treasury curve, into gold, into semiconductor type equities, and into the rails. All this, while generally selling the U.S. dollar. Yup, that all fits into a neat box.

Did I mention that trading volume ebbed at the two major New York equity exchanges, as well as for constituent companies in aggregate for both the S&P 500 and Nasdaq Composite? More than likely, there is more (or less) at work here than our central bankers' ability to assess the economy. So, what had the central bank communicated to the nation? There is currently no expectation that the Fed will change it's target for the Fed Funds Rate any time soon. In fact, the Fed continues to target 2% core consumer level inflation, and currently has no inclination toward moving short term rates through the full 2020 calendar. Hmm.

Understand this... according to the dot plot, the FOMC consensus is for low inflation, low unemployment, slower economic growth, and low interest rates forever. Seems legit. We'll never see a curve ball thrown at us over the course of a full year or a few full years. We trust this? The Fed has not met it's targeted rate of inflation since the Bush administration. The Fed expected to increase the Fed Funds Rate this year, not cut that rate three times. The Fed expected to continue with quantitative tightening this year, but instead was forced to return to balance sheet expansion. That brings us the liquidity in overnight repo markets. The Fed did not see that one coming. None of us did, the difference being that this is their job. Incredible failure at the New York Fed. My point is that they simply do not know. They don't know what will happen, and they most certainly do not know what they will do in response when the worm does indeed turn.

During the press conference, Chair Powell did seem to indicate that no one saw the change in economic conditions coming as 2018 ended and 2019 began. I had a good laugh at that point. We had warned them here at Market Recon for months before the twin policies that caused those issues were implemented. Increasing short-term rates while reducing the balance sheet as aggressively as was done, were incompatible policy aims, and the liquidity drain that followed was exactly what had been warned. Remember, QT was going to hum along in the background. That one never gets old. We wrote up these concerns, and we took these concerns on national television as well. I was not alone. Other professionals also warned. The FOMC failed at the time to heed those concerns. To say no one knew? Maybe if one steered completely clear of the written word and all financial media.

I mean away from trade with China, as that dog is still barking out in the yard. The Fed will keep expanding the balance sheet through March as planned. Once the central bank understands that overnight markets are in good shape, they will have to talk about tapering the $60 billion a month program. The markets will take this badly.

As to the Fed Funds Rate, the Fed will remain in its current state of inertia for some time. I believe this to be the correct policy stance for now so I won't knock it. Of the 17 dots that grace the ridiculous dot plot, exactly zero expect to see a lower FFR by the end of 2020, while there are four that expect to have to raise that targeted rate. Twelve of the 17 dots expect to raise short term rate by the end of 2021.

This is the deal. The worm turns one way, The Fed will cut the Fed Funds Rate when they are forced to by the collapse of the long end of the Treasury curve, and they will probably be too slow to do it, creating a re-inversion of the most important spreads within said curve. This would be the result of slower economic growth. The worm turns the other way, and consumer level inflation takes leave of Pandora's Box. Of the many awful things stowed away in that box, this is among the worst. For those under 40, trust me.

The Fed is then forced to raise short term rates in order to chase and tame this inflation a little too late after at first seeing this inflation as a positive before realizing that this beast is more than what was asked for. This will result in slower economic growth, whether or not the growth is there to slow. Understand.

For years, (and years and years) the Fed called on the Federal government to come to the aid of economic growth in the form of fiscal spending. While the Fed's policy statement made the rounds on Wednesday two hours ahead of the closing bell, the Treasury Department simultaneously released the government's budget statement for November. The month showed a federal budget deficit of -$208.8 billion. Fiscally for the central government the year starts in October, so let's go there. Hmm. The October budget hit the tape at -$134.5 billion. So, through two months, the Federal government has run up a deficit of -$343.3 billion.

Federal spending is running 7% higher in FY 2020 than it did a year ago. Medicaid expenses are running 9% higher, while Medicare is humming along at a 7% rise. Federal tax receipts have grown 3% over these two months. Is there help on the way? December is usually a fairly ugly month in terms of the budget, then quarterly taxes are due in January for corporations and for small business owners. I would be surprised to see a decent number for December, but a surplus in January is almost a necessity.

The number of retirees in need of health care is not going away any time soon. This federal outlay will only grow and grow rapidly in coming years. Would increased economic growth help? Of course. Does it fix anything? The problem is too big and the growth itself will result in higher interest rates making Federal borrowing more expensive. At some point, Treasury sends all eligible receivers downfield and just throws the ball as far as they can. A massive hundred year bond issuance? Irresponsible. Modern Monetary Theory? Even worse.

Politically, the answer will always lie with the best possible way to solve problems in the present even if that means more pain down the road for somebody else. There will be at some point, a very large bond issuance at an incredibly long-dated maturity. This will be a one-time event, until we do it again, and then again. We have become junkies and will only need more and more. We'll always love our children. Of course our great grandchildren will hate us.

What was that? An overnight selloff in Lululemon (LULU) ? No way. Didn't know they even made sell tickets for that one. This is the deal. Lululemon reported the firm's third quarter financial performance on Wednesday evening. The numbers were as awesome as they always seem to be. EPS of $0.96 beat consensus. Revenue of $916.14 million also beat, while spurring annual growth 22.5%, in line with every quarter the firm has out together now for quite some time.

As the firm that originally turned gym-wear into a fashion trend now known as athleisure for women has turned to menswear, and as the firm has targeted both direct to consumer sales as well as a brick and mortar approach, globally and domestically... there has not been a beat missed. Comp sales for the quarter increased 16% on 29% growth in direct to consumer sales, and 10% growth at comparable stores. Think of that. In this day and age. I walked through my local Sears last night. I think if I took a nap on the floor in the main aisle of the store, nobody would have found me before closing time.

Gross margin of 55.1% and Operating margin of 19.2% both impressed. Men now make up 21% of the firm's sales. I have one the shirts. So comfortable. This all said... why are the shares selling off overnight? Good question.

The problem is that the stock closed at $233.19 on Wednesday. That's 41 times forward looking earnings. Obviously priced for growth, the firm's own fourth quarter guidance has caused some overnight angst. Me? I have made some good money in this stock in the past, but it had gotten away of late. I used last night as a chance to re-enter with a small leg. We see more selling as the week progresses, I would expect to expand on that position. 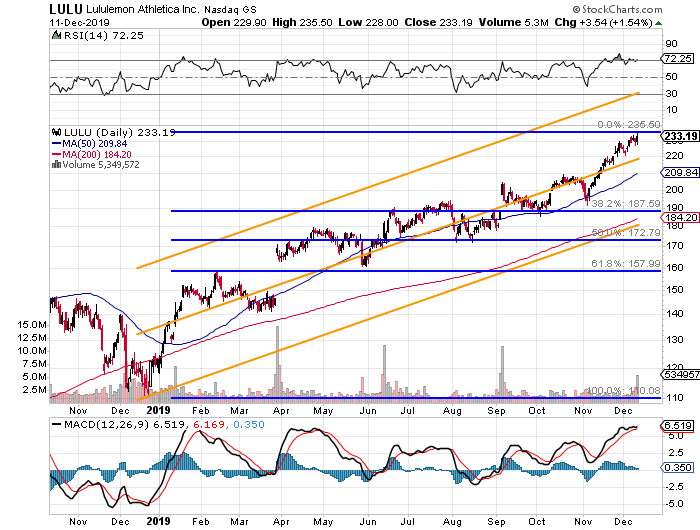 Looking at the chart, this name has just been a beast, up 91% year to date. Profit taking? For sure, now that there is a hint of reason. My initial point of entry is $222.90. In a perfect world, I would like to add at both the 50 day SMA of $209, as well as the 38.2% Fibonacci retracement level of the year long rally at $187. The position is small enough to be patient, and I'll have to see where opportunity lines up in the option markets. There are probably going to be some handsome premiums paid going out into March on expiration as this name shows some volatility in response to these numbers.

There are no public appearances scheduled for today.

Get an email alert each time I write an article for Real Money. Click the "+Follow" next to my byline to this article.
TAGS: Federal Reserve | Investing | Markets | Options | Stocks | Technical Analysis | Trading | Apparel | E-Commerce | Stock of the Day