Begins? Begins. The mass shutdowns. The changes to the American way of life that so many, myself included, had taken for granted for so long. Schools, houses of worship, places of commerce, are closing or curtailing availability as an attempt to decrease human interaction that hopefully slows the speed of viral transmission. All economics can at some point be boiled down to the simple measurement of human response. Response in terms of value placed upon goods and services relative to conditions of surplus and/or scarcity.

China's National Bureau of Statistics reported a number of key macro-economic data-points for the month of February on Sunday night. On a year over year basis. according to their government, China experienced a 13.5% decline in Industrial Production, a 20.5% decline in Retail Sales, and a 24.5% in Fixed Asset Investment. Human suffering aside, is that the immediate future. For Western Europe? For the United States? Oh, the numbers will vary, but I think we know... the markets certainly know, as a number of industries have simply stopped... that it is indeed what we see in the mirror.

Most readers well know by now, that the FOMC felt compelled to take action late Sunday afternoon, rather than wait a few days until the scheduled policy meeting this Wednesday that will now not take place. We had all heard rumor throughout the afternoon as the story regarding liquidity in commercial paper markets published at Reuters made the rounds. Then came the "heads up" e-mails from the alert ones, and then came the Fed itself.

Equity index futures sold off hard on Sunday evening, hitting "limit down" almost immediately. Since then, Asian markets and then European markets have opened to the drumbeat of ugliness. There were tweets referring to the Fed's actions being taken as "bazooka-light" or as a flop. Neither is true. In fact, such comments simply illustrate still a considerable lack of broad cognizance. The Fed, is doing what can be done, while leaving some powder dry monetarily to ensure that markets function properly, while setting the table for economic recovery if and when the economy itself is willing to recover.

The Fed can not force demand to recover before demand can recover on its own. Demand can obviously not recover anytime soon in a consumer driven, service sector economy forced to observe a strict custom of social distancing as a new norm. In an interview, conducted as Jerome Powell was wrapped up on Sunday evening, I was referred to, by the interviewer, as one of the few who has "seen it all." Well, I have never seen anything like this. Neither have any of the even fewer market pros who have been around longer than have I. Enforced social distancing has completely stopped the flow of cash across several industries, while forcing an incredible level of demand be brought forward, perhaps by several months for a very narrow slice of the economy.

We have all now witnessed undesirable behavior exhibited by people in a state of panic as we have gone about trying to procure staples such as cleaning supplies, canned foods, and paper goods for our families. People in different aisles at your local grocer are either nervous-laughing like some kind of mad jackal, or weeping because they still cannot find whatever it is that they need.

Let's cut to the chase. The FOMC, in a policy decision that was not unanimous, was as I mentioned above, aggressive. The target for the Fed Funds Rate is now reduced to 0% to 0.25% from 1% to 1.25%. From the statement, "The Committee expects to maintain this target range until confident that the economy has weathered recent events and is on track to achieve its maximum employment and price stability goals." In other words, this is going to be a while.

In addition, the Fed is prepared to increase its holdings of U.S. Treasury securities by at least $500 billion and agency mortgage-backed securities by at least $200 billion. There will be no weekly or monthly cap on these purchases. The Fed will also reinvest all principal payments from maturing securities already held on the balance sheet. Cleveland Fed Pres. Loretta Mester dissented in favor of a lesser rate cut, but was otherwise supportive of all liquidity related actions taken. I go on.

The Fed also announced that reserve ratio requirements for depository institutions would be reduced to zero as of March 26th in an effort to aid in the support of lending at the household and small business levels. This change could in theory have increasingly positive impacts once the consumer-driven economy tries to rebuild, especially in conjunction with the MBS purchases that could be increased later on in order to ease expenses for families looking to refinance household debt. This will not be immediately reflected in market pricing.

In conjunction with these moves, the Fed also reduced the primary credit rate by 150 basis points to 0.25% effective today (Monday). The Fed is intentionally narrowing the spread between the Fed Funds Rate and this rate in order to stir demand at the discount window in order to allow participants to cover funding needs while pushing out the term for this type of lending to 90 days.

The U.S. central bank has also coordinated with the Bank of Canada, Bank of England, Bank of Japan, European Central Bank, and Swiss National Bank to reduce the cost of costs of U.S. dollar funding on a global level. It seems like a lot, and it is. That said, the economy is now very likely in a severe state of contraction that will get worse as citizens hunker down in a more disciplined fashion, and as the pressure on public healthcare related infrastructure increases rapidly.

Next up is the U.S. Senate. Somehow, this legislative body has not yet passed the House bill that made the rounds last week. I would expect this failing to be remedied on Monday. The U.S. Treasury Department for its part, has expressed a willingness to advance funds to businesses in order to meet sick-leave requirements, especially those that may have issues with cash flow.

On Sunday, Secretary Mnuchin also stated that the House bill is just one of what will likely be a series of legislative efforts to backstop the economy. Obviously, workers, small businesses, and caregivers need to be protected as lives are disrupted. Beyond that, entire industries will likely have to also seek government aid in order to prevent a rapid spike in unemployment.

Let's be clear. The virus is the problem, and the economy will contract, perhaps significantly so, regardless of policy efforts made to counteract this reality. The virus is in control right now. The fiscal side has to be, not as aggressive as the Fed, but perhaps considerably more so. Our legislators have to enable Treasury to be decisive and immediate with the force of impact. The problem at hand can not be overwhelmed through policy. That said, policy can certainly work toward a reduction in aggregate human suffering, while setting up conditions when a great nation rises off of the canvas to rebuild. Make no mistake, this nation will rise off of that canvas. Count on it.

As I prepare to hit the "send" button, WTI Crude oil futures trade around $30 per barrel. That's a decline of roughly 5.5%. The best thing that can be said about Gold futures are that gold is not down from Friday's selloff. The U.S. dollar has weakened, and may need to be weakened further as we progress. As for the Treasury yield curve? While flat, three month yields are inverted through one year yields. Right now, the nadir of the curve is between one year and two year paper. Want to know how long this new lifestyle that just started literally over the past few days will persist?

While I hope we can shake hands and pal around with each other in a couple of months, the yield curve is suggesting that it takes a little longer than that. This brings us to equities. How low can they go? Honestly, markets have never tried to price in a nearly complete halt to economic activity. Without some positivity created regarding an aggressive fiscal stance being made by our legislators, the S&P 500 will look for immediate support this week at the lows of last Thursday and Friday. That's below 2500. 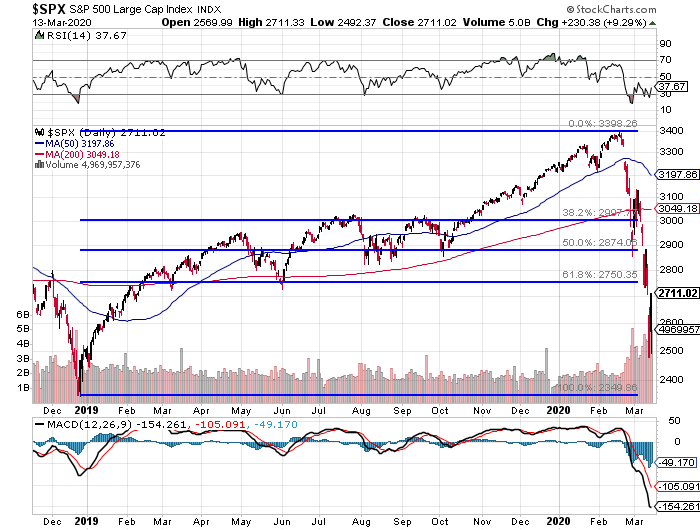 A failure there, and there is absolutely no reason to believe that stocks can not make a run at the lows of December 2018. Readers will note that there was at least some attempt at algorithmic support at every major Fibonacci level along the way down. A 100% retracement is the next key level whether we like it or not.

Zooming out for an overview from 10,000 feet, we see that this 100% retracement also happens to be pretty darned close to a 38.2% retracement of the whole darned bull market. Does that make the level all the more likely? It might. A trend line in place for nine years comes under pressure at the same time as well.

Should there be an "shock and awe" type of announcement regarding fiscal policy, markets may pop in a northerly direction. Understand this: There is no way to time a bottom, but we do know that regardless of policy, the virus is in control of the velocity of money, and the speed of transaction is without a doubt, the lifeblood of our, or any economic system. We recover when the virus says so. That is all.

Get an email alert each time I write an article for Real Money. Click the "+Follow" next to my byline to this article.
TAGS: Economic Data | Federal Reserve | Interest Rates | Investing | Markets | Stocks | Technical Analysis | Trading | Treasury Bonds | Coronavirus