One asset that has been running strong throughout 2022 has been the US Dollar. There are a number of reasons for this, primary of which is the Fed's aggressiveness in raising rates in an effort to help cool down demand pressures.

The theory is that if borrowing costs are high enough, all participants in the US economy will reduce borrowing and subsequently spend less. This is thought to put pressure on overall demand and force goods and services providers to lower prices thus lowering inflation.

In the theoretical land of spherical cows, this would probably work pretty well. It's a relatively politically safe thing for Fed Chair Powell to warn everyone about impending pain. Politicians play with their very lives, politically speaking, by making these types of statements to their constituents. Because of this, as well as the realities of trying to financially survive for an increasing number of Americans, federal and most state governments end up providing subsidies to both producers and consumers to help offset the high cost of, well, everything.

This helps out everybody, except it works against the work the Fed is doing by keeping rates high and if anything, pushes the Fed to raise rates even higher, which in turn, prompts more subsidies. Now you know why economics is referred to as the "Dismal Science."

Apologies for the tangent. The point of all of that is that with inflation hitting everything priced in US Dollars, including crude oil, and high interest rates, coupled with our AAA credit rating, making for a safe and profitable haven for investors, the demand for USD has been strong. Our perceived resilience as compared to other countries and regions ties into this as well.

As you can see from the chart below, major currencies have all been on the skids as compared to USD. Ways to have played the dollar trade with ETFs include any of the foreign market USD hedged funds available from Wisdom Tree like their International Hedged Quality Dividend Growth Fund  (IHGD) , the iShares Currency Hedged MSCI EAFE ETF  (HEFA) , or Franklin Templeton's FTSE Europe Hedge Fund  (FLEH) . 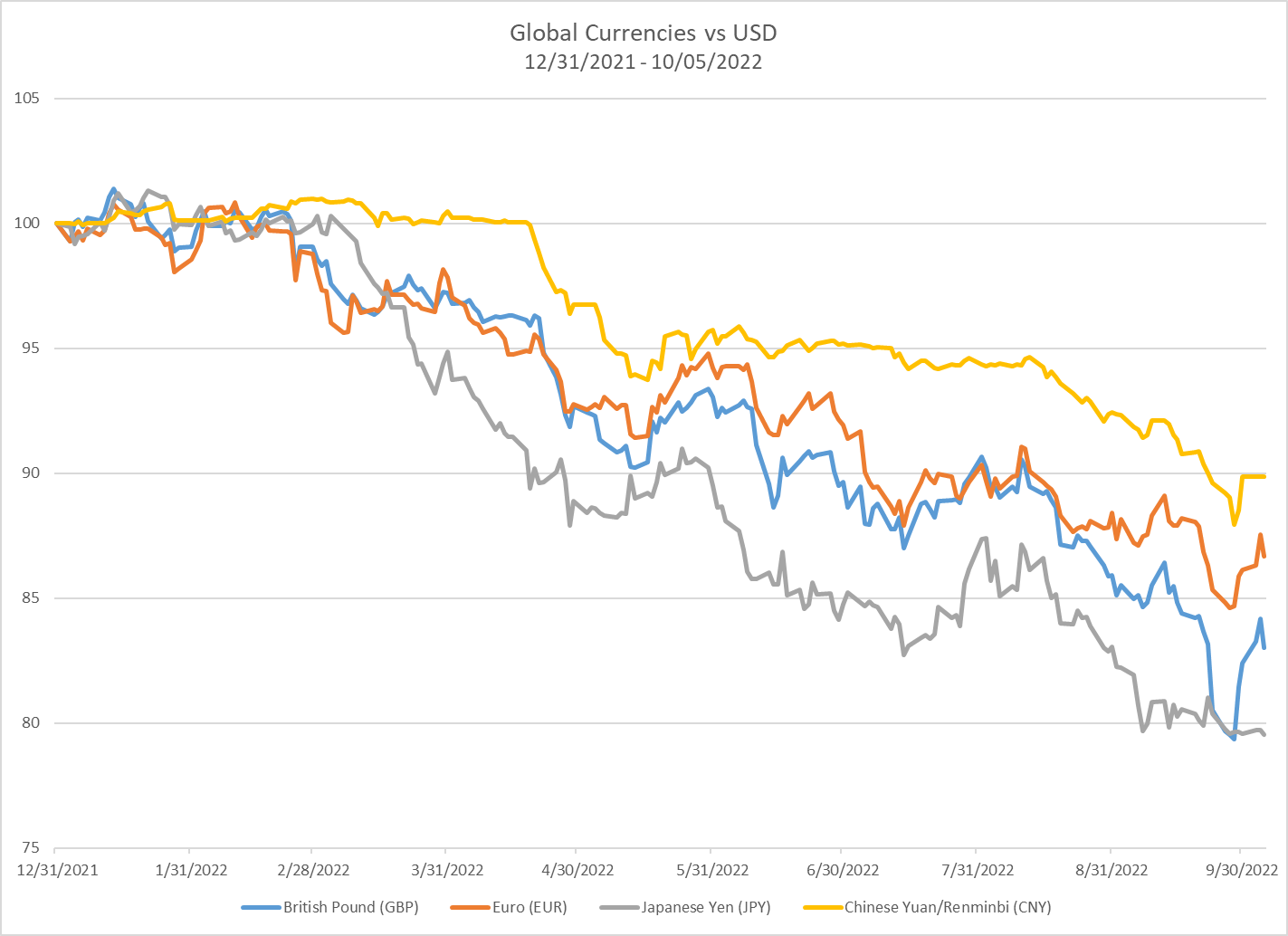 To see this hedge in action you only need to compare FLEH YTD to September 30 -13.81% returns with the unhedged version of the index the FTSE Developed RIC Capped Index of -26.70% over the same period.

As you can see at the tail end of the graph the Euro, GBP, and to a certain extent the Renminbi have started to bounce off of some historical lows.

To be clear, I am not calling a reversal in USD strength or making any warnings about the potential loss of USD's reserve currency status. However, as Blood Sweat & Tears sang over half a century ago, what goes up must come down and USD is no exception.

Again, not making any calls here but I will say that if your unhedged foreign holdings have been suffering under this USD regime in 2022, I don't know that I would take any drastic steps to try and make this up. Conversely, if you have been enjoying USD strength in any USD hedged foreign allocation, keep an eye on the dollar because there will be a time when the dollar starts to lose ground.

As you can tell, I'm saying that with USD at these all-time highs it doesn't make sense to try and play catch up right now.

I agree overall although, given the scale of the current imbalance, anyone with USD hedged exposures might want to keep an eye USD strength and find a comparable unhedged version to switch to once that strength starts to flip to weakness.

Get an email alert each time I write an article for Real Money. Click the "+Follow" next to my byline to this article.
TAGS: Currencies | Economy | Federal Reserve | Investing | Markets | Stocks | Technical Analysis | Trading