The Trade Desk (TTD) is trading higher Friday on the heels of their better Q3 results where they beat on earnings and revenue. Trade Desk plays in the ad-tech space, offering a marketplace that allows customers to purchase various types of advertisements to run global campaigns in digital media.

In this daily bar chart of TTD, below, we can see that a two-month decline in the price of TTD in August and September chopped $100 off the price of the stock. Prices have steadied since early October but is that enough to make TTD a buy?
TTD is still below the declining 50-day moving average line despite today's rally. TTD is still below the rising 200-day moving average line but it was testing the underside of the line during October, however prices have been repelled so far.
The daily On-Balance-Volume (OBV) line shows a decline from June to the beginning of October and then only a weak rise. This movement in the OBV line suggests more aggressive selling and only very limited aggressive buying.
The trend-following Moving Average Convergence Divergence (MACD) oscillator gave a cover shorts buy signal in early October but it has yet to cross the zero line for a buy signal.

In this weekly bar chart of TTD, below, we can see that TTD has made a considerable rally over the past two years and the past three years. The decline in August and September took prices right through nearby support in the $240-$180 area so my gut tells me the chart has weakened significantly. Prices are below the rising 40-week moving average line.
The weekly OBV line has been on the defensive since February and that speaks to considerable selling or liquidation.
The MACD oscillator has been in a take profits mode since August and is nearly ready to cross the zero line for an outright sell signal.

In this Point and Figure chart of TTD, below, we can see that the software is still projecting a downside price target of $153 despite today's rally. A trade at $220 may be needed to make this picture more positive. 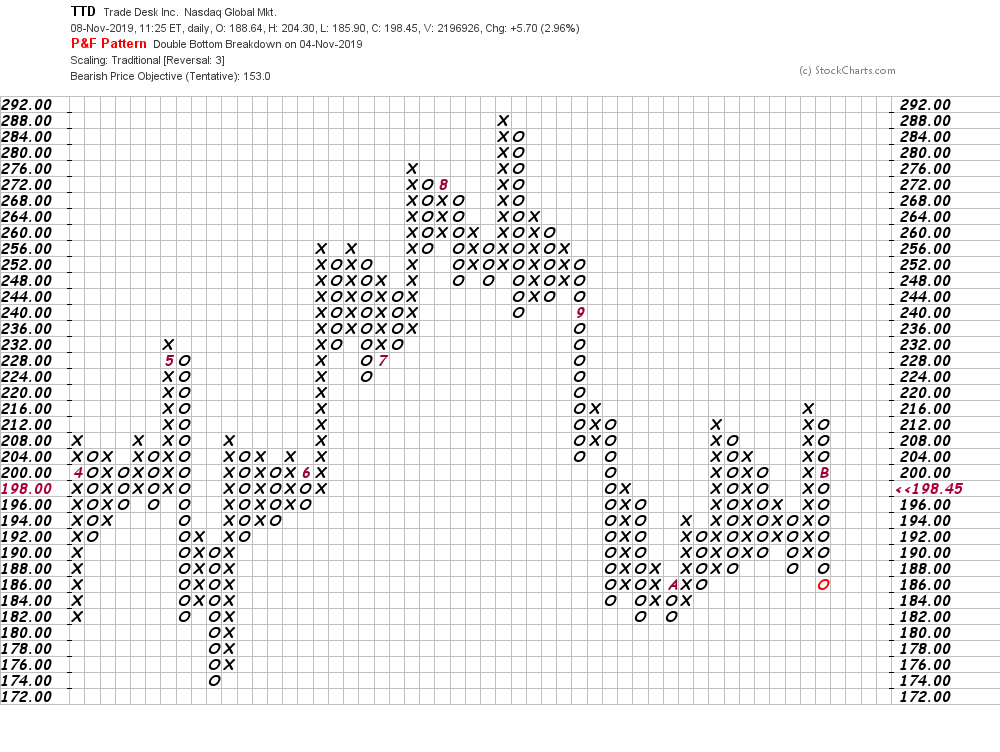 Bottom line strategy: The charts of TTD could improve in the days ahead but right now the overall patterns and signals are just not strong enough to warrant a new long position. Stand aside for now.
Get an email alert each time I write an article for Real Money. Click the "+Follow" next to my byline to this article.
TAGS: Earnings | Investing | Stocks | Technical Analysis | Trading | Media | Advertising