During the popular 'Lightning Round' segment of Mad Money Thursday night, one caller asked Jim Cramer about The Trade Desk (TTD) : "I still like it, but buy in increments," said Cramer. Let's check out the charts.

In this daily bar chart of TTD, below, we can see that prices have surrendered most of 2019's gains in just the past few weeks. There are lots of other charts with that condition. TTD is trading below the declining 50-day moving average line and below the cresting 200-day moving average line.
The trading volume has been heavier since the beginning of the new year and the On-Balance-Volume (OBV) line shows a peak in early January. The decline in the OBV line is a sign that the sellers of TTD have been more aggressive.
The Moving Average Convergence Divergence (MACD) oscillator is still in a bearish configuration below the zero line. When the MACD oscillator begins to narrow it will be a positive signal that most of the damage is behind us.

In this weekly bar chart of TTD, below, we can see that prices have made a big upside run the past three years. Unlike prior pullbacks or corrections, TTD is well below the rising 40-week moving average line.
The weekly OBV line has been showing weakness since early 2019 suggesting that we have seen a significant period of distribution (selling).
The MACD oscillator on this longer time frame shows both a bearish divergence with a lower high when prices made a higher high and a take profits sell signal.

In this daily Point and Figure chart of TTD, below, we can see that prices have been down in this area before (another way of saying the upper $180's could be support) but also that a possible downside price target of $145 can be projected. 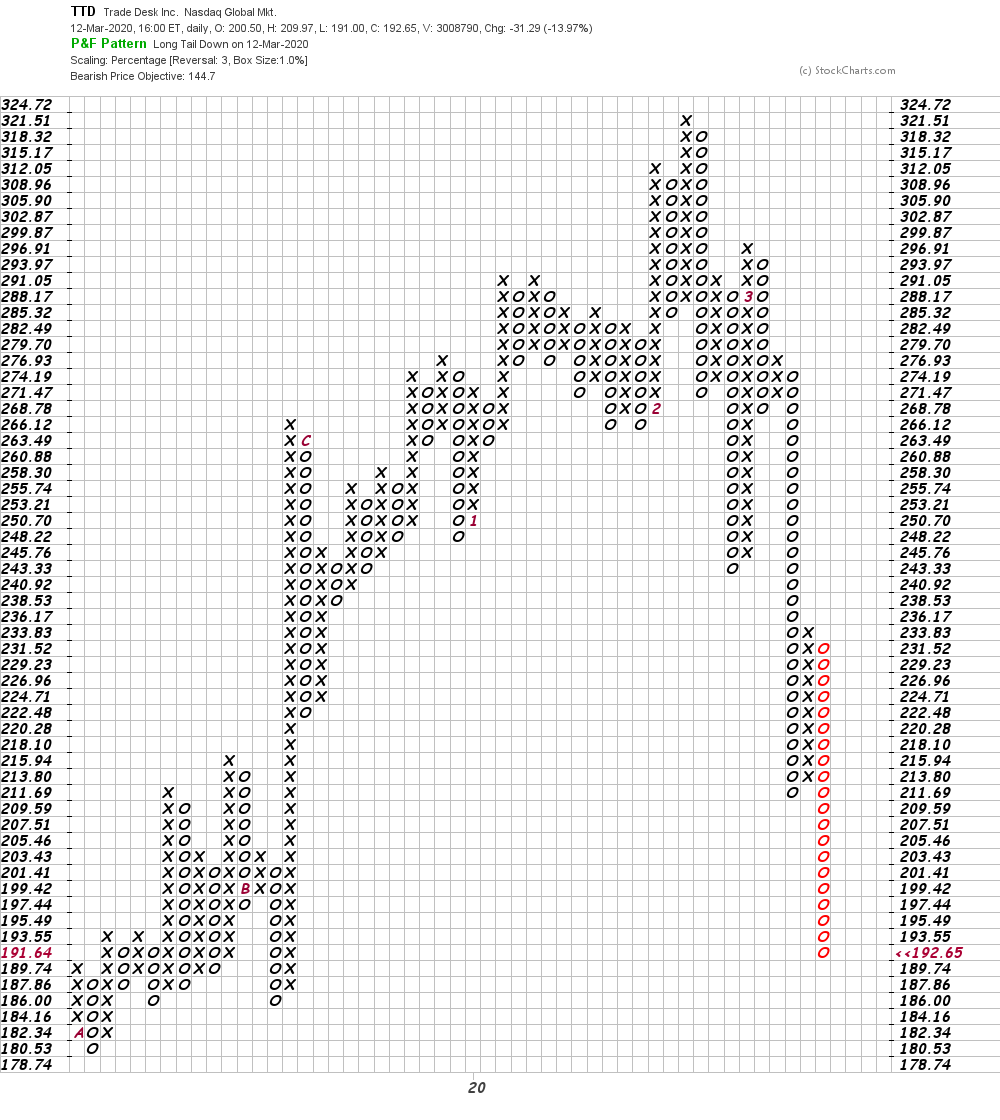 Bottom line strategy: Because there are some clear bearish signals on TTD, I would agree with Jim Cramer's approach of buying TTD in increments.
Get an email alert each time I write an article for Real Money. Click the "+Follow" next to my byline to this article.
TAGS: Investing | Stocks | Technical Analysis | Trading | Software & Services | Technology | Technology Hardware & Equipment | Mad Money

Following a one-day respite, software, growth stocks and small caps are getting hit. Here's my take on the midday action.