It's that retail-ish time of the season. The tail end of "earnings season" when many of the large chain retailers that have a lot of public name recognition report their quarterly numbers.

In an atmosphere that feels a little like rivalry week towards the end of college football season, we'll hear from super rivals such as Walmart (WMT) and Target (TGT) , as well as Home Depot (HD) and Lowe's (LOW) . All of whom have had to deal with issues surrounding inventory management or in some cases mismanagement. Then, there's retail's version of slapstick comedy, Kohl's (KSS) .

In addition, on Wednesday, the Census Bureau will publish July Retail Sales. That should be next week's macroeconomic event to end all macroeconomic events. The question is... can we find opportunity in this beaten down group. The ugly truth is that the group has struggled badly. I also think that a number of these names project potential optimism going forward.

Also reporting next week is The TJX Companies (TJX) , often referred to as TJ Maxx, which is one of the company's retail brands along with Marshalls, HomeGoods and others. What caught my eye about this name in particular is the technical setup, which appears to be superior to its competitors. So, let's check out the whole enchilada from top to bottom and see if we are looking at a trade or an investment. Shall we?

TJX is set to report the firm's second quarter financial results ahead of the opening bell this coming Wednesday, August 17th. Wall Street is generally looking for EPS of $0.67 on revenue of $12.1B. The year ago comp was $0.79 on $12.1B, so we're expecting visible margin pressure on sales growth of almost 5%. EPS expectations for the quarter were centered around $0.76 at the start of the quarter, so they have had to come in.

The thought... My thought here is not so much based on Q2 or H1 performance, but the potential for increased demand for off-price retailing of apparel and home goods as the economy slows, interest rates climb and credit card balances get to a point where for many households they will have to be better managed. Remember, TJX can be more flexible than many other retailers. The large retailers that cater to discount shoppers have to be in almost every market. TJX can choose to sell only what it can find at a discount itself and try to make a profit by spinning it out to the public.

The stock trades at 20 times forward looking earnings, which is in line with competitors like Ross Stores (ROST) and Target, but less expensive than Walmart. TJX currently pays shareholders $1.18 per annum to stick around. At the last sale, that's a yield of 1.72%. Not aristocratic, but certainly in line with industry norms.

Like with all retailers, inventory management has been tough and TJX like those other retailers, had become over supplied. As of the April quarter, TJX had been doing a better job in my opinion with their balance sheet than many chain store retailers. At that time, TJX had a net cash position of $4.295B, which is their lowest cash balance since early in the pandemic. Inventories were up to $6.99B, which conversely was a high for this firm. Current assets ended Q1 at $12.48B.

Current liabilities ran at $10.018B, leaving the firm with a current ratio of 1.25. That not only passes muster, it beats the heck out of a lot of competitors. Neither Walmart nor Target had a current ratio of 1.0 at the end of Q1. Obviously, the quick ratio would be ugly, but remember, even in normal times, we tend to overlook poor quick ratios for retailers as their businesses are inventory intensive. Of course, properly valuing inventory is the root of the industry's problem in 2022.

Total assets came to $27.71B including just $96.9M in "goodwill" and no other intangibles. Total liabilities less equity adds up to $22.114B. This includes $3.356B in long-term debt, which was smaller than the cash balance. The only weakness in this balance sheet (as of three months ago) was the question mark around inventory valuation. This was about as strong a balance sheet as I think we could have found for a large cap firm in this industry at that time.

This is going to be a busy chart, so please take it slow. Let me explain. Thanks. 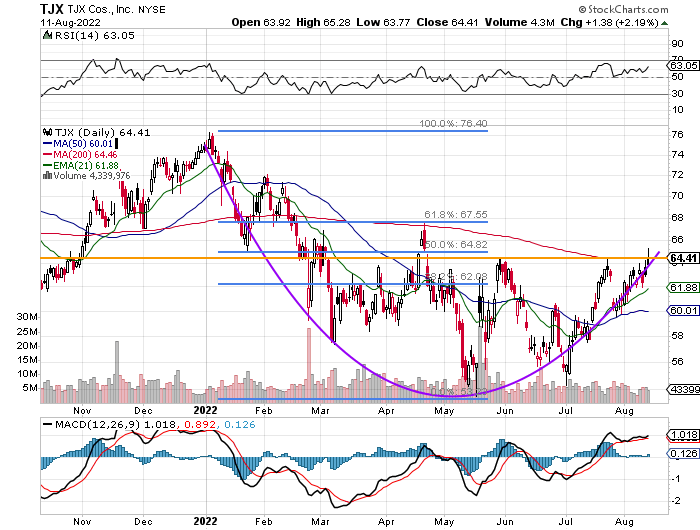 First we have the purple cup still in development. Next, I drew an horizontal orange line across the chart from left to right. This line has been where resistance has been met in late March, late May, late July and right now. This line also served as brief support in mid-February. There is something there, algorithmically.

This line also lines up well with a 50% retracement of the entire early January through mid-May selloff and just happens at this moment to be precisely where the 200 day SMA resides. TJX takes and holds the 200 day, and the PM's with an interest will likely be forced to increase exposure. In other words, there is a door here, and TJX is ringing the doorbell.