One name that I have traded for myself in the past and covered in print for Real Money that has remained in the minds of readers has been that of Kratos Defense & Security Solutions (KTOS) . This is one name that, no matter how long I refrain from talking about it, brings in emails requesting new coverage. Well, for those among you for whom I speak, today, the last day of the decade, has become that day.

Some background... though I have traded this name fairly well, having appropriately shaved the long position at price targets when met, I did ride the last 25% of that position into the abyss as the stock sold off through the Autumn, and that's where I stand. Let's figure out together, if it is yet time to reload, which would be a nice trade in itself, or time to cut bait on the final tranche of this defense and aerospace offering.

The Russians now boast hypersonic weapons that travel at Mach 27. The Chinese are close. The U.S. is less close. We have warned on this for years now. The reality is here that, yes, we can respond with overwhelming force, but we likely can not prevent a first strike. Just over the past few days, the U.S. was forced to respond to aggression in Iraq and Syria by an Iranian-backed militia. Supporters of that militia then responded to this U.S. response by attempting to storm the U.S. embassy in Baghdad. Within the past few weeks, China has added a second, operational aircraft carrier to that nation's fleet and has already sailed that vessel through the Taiwan Straight.

In short, no matter how much you want to play nice on planet earth, this world remains a dangerous neighborhood. U.S. strategic and economic interests remain dependent upon the ability to project force and influence where ever and when ever necessary. The world does not have to fear the U.S., but they have to respect our capabilities. The perception of being a nation less interested is not an option. Some in the media snicker at the creation of a Space Force. The fact is that this move was overdue.

Understand that these paragraph are going to be wordy, and due to the nature of this business, vague in detail.

On Monday (yesterday), Kratos Defense announced that its C5SIR (Command, Control, Communications, Computing, Combat, Intelligence, Surveillance and Reconnaissance) Modular Systems Division had recently received an approximate $50 million, single award indefinite delivery, indefinite quantity product and hardware related contract in support of a national security program. Initial funding and tasking under this contract has already been received by the firm. For those new to Kratos, this division of the firm specializes in hardware, systems, and subsystems in support of unmanned aerial vehicle, high powered directed energy, missile, missile defense, radar, surface and other combat weapons systems and programs. The work will be performed in secure locations and no other information related to this contract will be released.

On this award, Tom Mills, President of the C5ISR division said, "The recapitalization of strategic weapon systems to address peer and near per threats of the United States and its allies is providing a number of large, new program opportunities to our business, including in the Missiles, Missile Defense, Radar, Space, Unmanned and Combat System areas, and we are proud to address mission critical national security priority ares." Rock and Roll.

On Tuesday (this morning), Kratos Defense announced that it has received an approximate $24 million single award contract for microwave electronics products in support of missile system programs. This is the initial award for what is expected to be a long-term, multi-year program. Again, no further information will be made available related to this contract due to the nature of the work.

On this award, Yonah Adelman, President of Kratos Microwave Electronics Product Division said, "This recent contract award is in support of what are expected to be long-term, multi-year programs and some of the largest programs in out division."

I don't know how much of these deals are priced in. My thought is perhaps not fully. Another thought might be that due to the recent advances made by potential near peer adversaries, and the creation of a sixth branch of the military born of the Air Force, that this kind of federal spending could realize increased focus at this time.

Kratos does not report until late February. For the current quarter, consensus is for EPS of $0.09, which would be flat from Q4 2018, on revenue of $197.4 million. The sales number would be good for 20% growth. Full year 2020 is expected to show earnings growth of 38% on revenue growth of 15.8%. Do these numbers need to go higher? Well, there's a chance.

As sales have increased during the Trump era, operating margin has worked its way slightly lower, printing at 6.25% for the most recent quarter, however EBITDA margin has worked slightly higher. The firm had on that Q3 balance sheet total debt of $384 million. That said, the same data showed a cash position of $181 million. The firm runs with a Current Ratio of 2.84, and a Quick Ratio of 2.33, meaning that the firm should have no problem in meeting all short- to medium-term obligations. They can pay their bills. 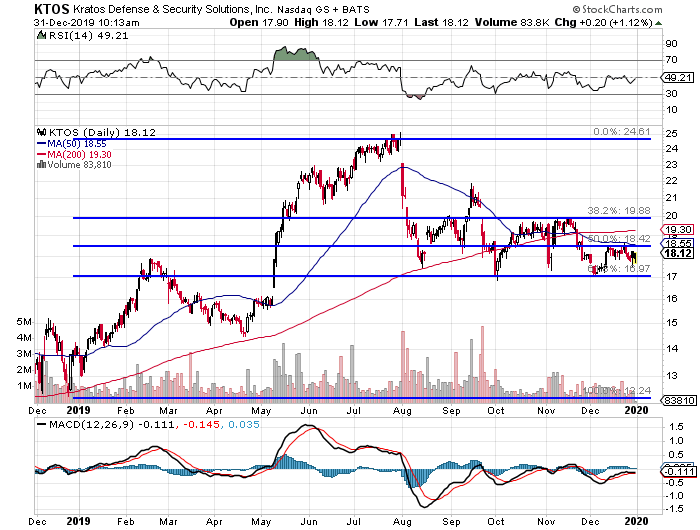 I know some folks doubt our favorite 12th century mathematician. Those folks need to see this chart. KTOS has clearly and repeatedly found support at the 61.8% Fibonacci retracement level of the December 2018 through late July rally. That spot is an even $17.

Two other things here that readers need to see. KTOS has run into regular resistance at the 50 day SMA, currently $18.55. In addition, the stock has formed a basing pattern over several months that suggests serious traffic close to $20, which also would be the 31.8% retracement level off of the same rally.

In short, do I think the time to start rebuilding the long position in KTOS has arrived? I do. The idea would be to add as close to $17 as possible, which will be difficult.

Yes, I Have a Plan (in minimal lots)

Notes: The trader in this example has planted a flag in the name with an intention to build a position. Should the shares rise into February and May, the trader has paid for the right to add at the $20 level and subsidized (and been paid to do so) that purchase through selling downside equity exposure at what looks like an attractive level.

Get an email alert each time I write an article for Real Money. Click the "+Follow" next to my byline to this article.
TAGS: Investing | Stocks | Technical Analysis | Trading | Defense | Technology