Merck & Co. (MRK) is due to report its latest earnings numbers this week. How do the charts and indicators look ahead of this quarterly release? Let's check.

In this daily bar chart of MRK, below, we can see an uptrend from early April to early December. Prices have pretty much traded sideways from November so the key question is where prices will resume their rally to new highs or correct some of their 2018 gains? Prices are currently below the flattening 50-day moving average line but about $4 above the rising 200-day moving average line.

The daily On-Balance-Volume (OBV) line shows more aggressive buying from February to early December. The OBV line has declined the past two months telling us that sellers of MRK have been more aggressive.

The trend-following Moving Average Convergence Divergence (MACD) oscillator has been hugging the zero line the past month so it will be quickly influenced by MRK's next move up or down.

In this weekly bar chart of MRK, below, we can see mixed signals. Prices are still in an uptrend and above the rising 40-week moving average line.

The weekly OBV line was in an uptrend from last November but it looks like that trend has been broken. From here, if the OBV line made a new high it would be possible while a move below the December low will be bearish.

In the lower panel is the weekly MACD oscillator which gave us a take profits sell signal in December.

In this Point and Figure chart of MRK, below, we can see a downside price target of $65.00. A decline to $70.85 would be a new low for the move down and could precipitate further losses. A rally to $76.72 would be a double to breakout and would be bullish. Stay nimble. 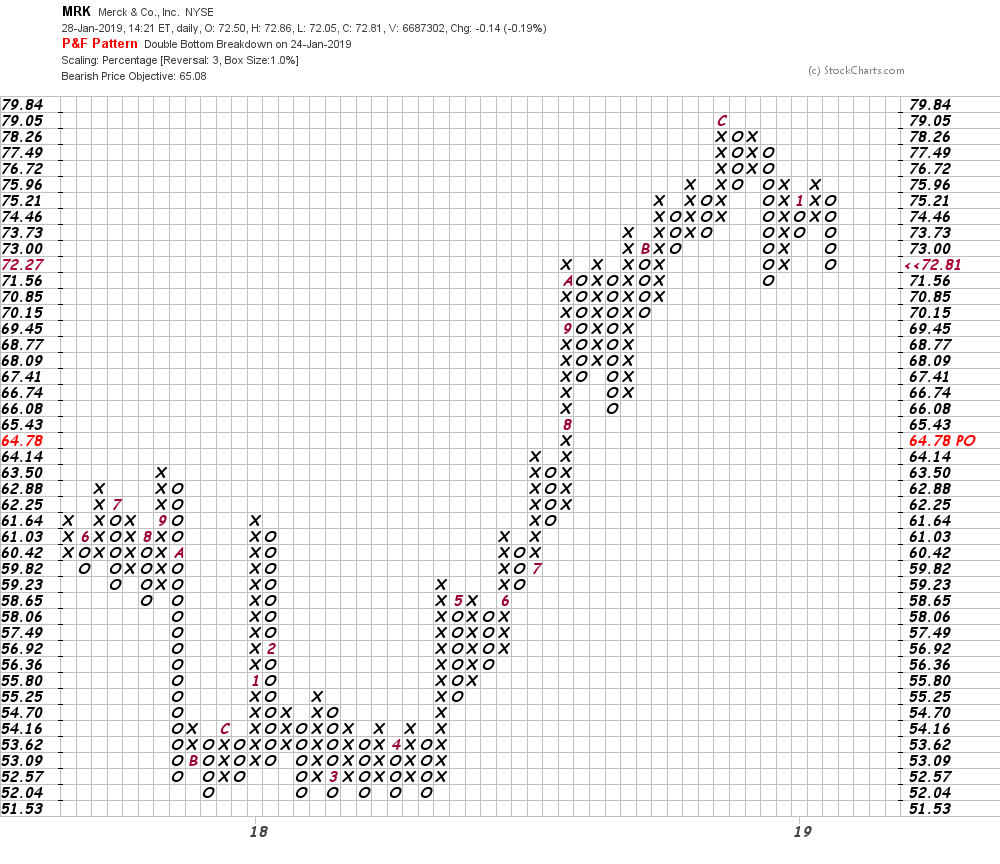 Bottom line strategy: The bull case and the bear case are nearly balanced and the upcoming earnings release could well be the catalyst for a move up or down. It is not scientific but my gut favors the upside.

Get an email alert each time I write an article for Real Money. Click the "+Follow" next to my byline to this article.
TAGS: Earnings | Investing | Markets | Stocks | Technical Analysis | Trading | Pharmaceuticals | Mad Money