Dr. Alexandre Manette is a fictional, sympathetic Dickens character. Imprisoned for many years through no fault of his own. Caught in the whirlwind of the times. Ah. The times. We'll get to this shortly. What is it though that we see evolving before us? An equity bubble, as in 1999? History often repeats itself. Twain was reputed to have said that "History doesn't repeat itself, but it often rhymes." Though I find no actual evidence that Twain ever said these words, I do like the quote. Someone did make a record of it. The echoes of epochs do appear to rhyme more than repeat, as the passage of time somehow blurs consciousness of the minutia. More accurate, I think, was the Greek academic Herodotus who said "Very few things happen at the right time, and the rest do not happen at all. The conscientious historian will correct these defects."

My take? Stay alert to opportunity. Stay vigilant in regard to risk management. What happens next will make sense when the tale is told, of that someone will make sure. As for Dr. Manette, he will be this market's temporary mascot. For, markets sell off hard, and then rally just about as vigorously within hours. A virus that shuts down major Chinese cities, and pops up in spots around the globe, is either the worst thing since the Spanish influenza of 1918, or not really so bad. The virus is either nearly contained, or overwhelming medical professionals who are getting sick themselves. The World Health Organization believes that there is no reason to declare this virus a global emergency, just yet. That was enough for most of the algorithms that move on headlines, and that's all markets needed. Equities rallied, spreads between short-term and long-term yields relaxed. Gold bounced off of the highs of the session, as oil bounced off of the lows. Just don't go to the gym, or take the bus, or shake hands. Wash your hands, but don't touch the faucet. Oh joy.

Most of our broader equity market indices have shown signs of cresting this week. This is the third time that we have seen a rounding at the top of these charts since November. Obviously in both of these prior attempts to halt this risk-on move, the pause really just refreshed the appetite for more. Two sectors however have not shown signs of cresting, one... the Utility sector has gone way beyond a technically overbought condition. Take a look at this. 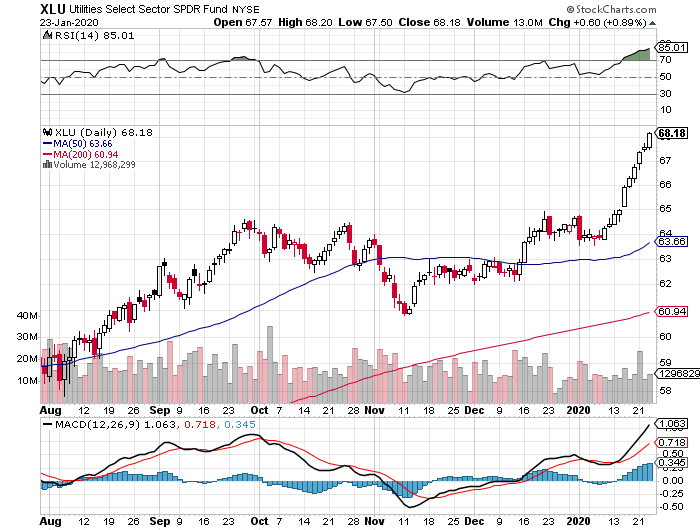 The other sector, at least partially due to a renewed vigor in ESG directed flow of capital has apparently been assigned a lower multiple, perhaps permanently... 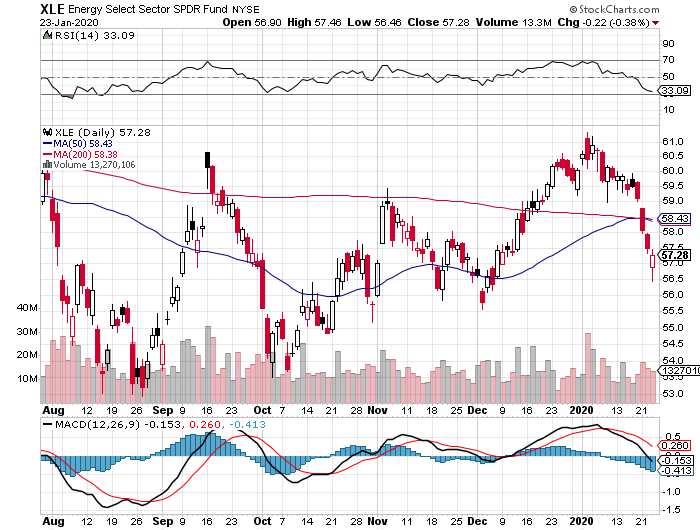 Whoa. Paris or France. One group cherished. One vilified. The Marquis St. Evremonde? Madame Therese Defarge? Must we really embrace one completely at the expense of the other? Is there middle ground?

How does one approach these markets? How does one interpret what they see before them? I am asked these questions often enough, and often enough, my response is the one that you have read so often if you indeed do read me on a regular basis. The trader takes the tactical approach... to Understand in order to Identify avenues of approach and targets of opportunity, so one may Adapt to changing environments in order to Overcome obstacles presented, and then carry on to Maintain balance. Seems simple. The method is really meant to slow the brain down just enough to allow for reasoned cognitive response. However, this method is tactical in nature. This method is meant for traders who must move more urgently than do investors. This is "sniper rifle" type stuff. One shot, one kill.

Investors are not using sniper rifles. Investors typically do something else for a living other than hanging onto every move made within the marketplace. Investors are using mortars. High impact, area weapons. Investors must think strategically rather than tactically. The method, or at least my method, as I fancy myself both a trader and an investor, is to create something of a checklist in order to determine just how comfortable this investor is with his or her risk profile.

One must understand that price discovery as perverse as it has become, is still (at least in overview) controlled by the flow of capital. The flow of capital itself depends on corporate profitability and economic growth. Those are the pillars of equity investment... earnings supported by fundamentally sound economics. Now those pillars are either supported, or not... by a number of factors. Investors should go through these factors one by one, deciding whether the risk is to the upside or downside for each, and then through the stained glass of this mosaic ... decide what they think they see.

Factor: Monetary Policy... Obviously supportive of upward market performance in recent months. The risk? May be to the downside. How much longer will the Fed continue to expand the balance sheet? Forever is not an option. Nor is adding short-term liquidity to overnight repo markets. Taper tantrum is an eventuality in my opinion.

Factor: Fiscal Policy... Still loose. Might be for quite a very long time. That said, should the Fed no longer anchor the short-end of the curve, the U.S. Treasury will be forced to push out the bulk of borrowing toward that longer end, perhaps in good size. Steepening the yield curve would be welcome in the current environment. Controlling that expansion in interest rates that would impact the public? That might be more complicated than it is currently respected. Actually, there is no respect in markets at this time for such thought.

Factor: Valuation... Perhaps these stretched valuations are where they should be, in this environment. Not in my opinion, if earnings growth does not catch up. This is a double edged sword. I would think that the risk to valuation is to the downside, as the risk to earnings growth is probably to the upside. Ever grow into your cousin's clothes as a kid? That is the picture that I try to paint for you here.

Factor: Condition of Trade... Obviously much better now than it was only recently. However, with both North American trade, and trade with China in an improved place, where does that put the risk? As trade with the European Union becomes the headline maker in this space?

Factor: Sentiment... Put/Call Ratios are still well below their own 50 day and 200 day SMAs. The CBOE Volatility Index (VIX) still stands close enough to support. Most bull versus bear surveys show above mean bullishness at this time, and have for a good while. This is about you. How do you feel? If one is uneasy, reduce the risk. It's that easy. I'm not kidding. Compare yourself to benchmark performance? Okay, but over a longer time frame. Doing so over the short-term, or too often can negatively impact decision making, and if behind... provoke unnecessary risk taking. Then if there's a problem, it gets worse. This, my friends is experience speaking.

What a night for the semis !! Yowza. Actually, the action started mid-day, when Morgan Stanley's Joseph Moore, who rates as a pretty darned good analyst, upgraded both Micron (MU) and Western Digital (WDC) to Overweight from Equal Weight. Moore increased his target price for MU from $56 to $73, and for WDC from $64 to $88. Why? Flash, that's why. This analyst sees a potential 10% increase in priced of NAND memory this quarter as next-gen gaming consoles hit the shelves. Moore sees DRAM prices moving higher over the next half year but clearly not as quickly as Flash. That's probably why WDC out-performed MU on Thursday.

Then the bell rang. As Intel (INTC) was smashing expectations, raising guidance, and increasing their dividend, Broadcom (AVGO) announced two multi-year agreements to supply wireless components to Apple (AAPL) that could ultimately add $15 billion in revenue over the lifetime of these deals to already existing agreements between the two firms. Shares of Advanced Micro Devices (AMD) and Nvidia (NVDA) simply piggybacked the good news overnight.

From 10,000 feet, it would appear that spending is back relative to the data center, the business cloud, PCs, and gaming. It's been often said that the semis trade like commodities. Well, in terms of demand... game on.