Let me know if you've heard this one... "This too shall pass?" Hmm, thought so. Listen, in the grand scheme of things, much worse things have happened to much better people. They used to burn saints at the stake, didn't they? I guess a volatile marketplace in an uncertain environment is just not quite in the same league. Oh, by the way. I've been around these markets since before we even knew what Fed officials looked like, and I don't remember ever trading in a certain environment. So, next time you hear a 22 year old "analyst" go on about uncertain times... ah, never mind. Everybody drop and give me 50. Thursday morning. Let's begin.

I don't know how old I was, but I was little. Something caught my attention. The sidewalk was crowded. There was a man behind a large cardboard box, with a crowd around him. I remember the cash being thrown around. The man had three small cups and one (I think) small fuzzy yellow ball. I thought I could do this. It looked easy. I had enough money for a whiffle ball and maybe a soda pop in my pocket, but nobody else was throwing coins around, and I was the only kid... so I stayed quiet, and watched.

Suddenly, a firm grip found the back of my neck. Mom! You guys ever see angry? Yeah, that wasn't pretty. "I don't ever want to see you hanging around those guys." Mom wasn't playing. Then something about waiting til my father came home. I had no idea that this game was one that I couldn't win, but I did learn to watch those games from a distance, see grown men lose paycheck money... then watch the whole thing break up in seconds after the ragged looking guy on the corner would signal that the police were coming. A lookout? I started to realize that the environment was broader than anything I had imagined. Every happy smile was not the start of a new friendship. Sometimes, it's part of the game, and the game itself is not your friend.

I know. It's been just two days. Yet, broad-based market indices are all roughly 3% lower month to date. Some reaction to Tuesday morning's bloody ISM September Manufacturing survey, don't you think? Yes, I have been pushing a defensive approach but this was fast and this was angry. Are markets short-term oversold? Well they are getting there. Personally, I did just nibble a little bit late on Wednesday. Only in names that needed some help, which really is not too many of them, just yet.

To a degree. Every one of us knew that the U.S. along with the rest of the planet was already suffering from a lengthy bout of industrial weakness... a recession in manufacturing if you will. Will this centralized weak spot bleed into services? Will this weakness bleed into labor markets, or consumer behavior? Of course. Proceed with eyes open. The best way I know to never get sucker punched is to get sucker punched just once. Remember how that felt? Situational awareness. Understand and identify all avenues of approach... as well as of escape.

Sure. I mean it's not a positive that headline risk appears to be around every corner. Just take a look at your social media pages. Your friends that you have known all of your life have lost all interest in everything other than posting stupid memes that vilify the side of the aisle in Washington that they least identify with. Smart people are no longer able to self-label the ridiculous. Does political damage to certain individuals end up leaving financial markets in a position to have to price in socialist candidates at the top? If so, we ain't seen nothin' yet.

The market could be pricing out some already "priced in" optimism over coming U.S. / China trade negotiations. Does some kind of deal get done that at the surface would appear as a positive, even if deep, more significant issues remain unresolved? The mainstream media likes to paint a picture of political pressures forcing a compromise. Don't be too surprised if these talks turn in any direction. A limited trade deal? Sure. Should such talks devolve into a negotiated divorce... would that shock you? Be prepared mentally for anything.

How much would a prolonged "cold war" with two super-powers leading separate but parallel spheres of influence cost? Excuse me. There's no price tag on this thing.

JP Morgan (JPM) reports along with Citigroup (C)  and Wells Fargo (WFC) in less than two weeks (October 15th). Then the game will be afoot. Earnings are expected to report in at substantial contraction this quarter, a third consecutive quarter of decreasing profitability. Factset reports that 113 S&P 500 constituent companies have issued guidance going into the numbers. Of that 113, 82 have issued lower guidance, 29 from the information technology sector alone. Ugly? Yes. Priced in? Perhaps. Sort of.

Traders must remember that this lowers the bar. Companies do not necessarily have to do well. They just have to beat what is already priced in. Got me? Shell game.

See the piece by Tomi Kilgore at MarketWatch this morning? Apparently the scales of supply and demand are evolving. The report explains that corporations repurchased their own shares in the third quarter to the tune of $145.9 billion, down from $281 billion in Q2. This while, according to TrimTabs, corporate insiders sold $14.2 billion worth of their own shares in September through the 26th. Even if no sales were made over the last two days of the month, this makes September 2019 the most aggressive September for insider sales in 10 years.

In addition, also from TrimTabs... September became the sixth month of 2019 (with three months left) that saw insider selling rise above $10 billion in value. The last year that insiders sold that much this often was 2006. I think the Mets won the NL East that year.

What Is On Our Side?

Do not despair as you read all of the various stars that seem line up against equity markets. Sure, there is reason for bloodletting. There is also reason to see longer-term equity strength in valuations. This is why I never get too excited about anything, and always leave myself with enough wiggle room. I'm amphibious. I'll adapt to anything.

Yes, there has been a run of IPOs (initial public offerings). Some of these new listings have obviously been of suspect quality. That said, just as corporate repurchase programs have reduced public floats at many companies, there are just less publicly traded companies than were traded a decade or two ago. Scarcity is on our side. The Wilshire 5000 was so named as to include basically every publicly traded U.S. company. Way back in the summer of 1998, this index had blown up to 7,562 constituent listings as the internet bubble was building. Earlier this year, this extremely broad index contained little more than 3,800 names, and that was well above the lows experienced earlier this decade.

Oh, passive investment vehicles are a factor as well. Active mangers (pot meet kettle) like to complain about passive investment vehicles and argue over whether or not this itself has become a dangerous bubble. It can not be denied however that as more and more funds are created with an underlying special purpose, or for any old reason, that this creates increased demand that is then thrown up against this already mentioned reduction in supply.

Even before we get to global monetary policy, irresponsibility in fiscal policy across the developed world and the wonders of fractional banking as well as the incomprehensible complexity behind new, exciting, and perverse ways to increase leverage, there is an imbalance between supply and demand that in the end favors higher valuation. No check that. In the end, this favors financial destruction. Let's go with the medium to the long-term. In the medium to the long-term this favors higher valuation.

Am I still defensive in posture? Yes. Of course. Currently, I am running allocations above my norms for bonds, cash, and gold. My equity stake is still overtly net long, however the composition of that allocation is now far more dividend focused (and it has been for weeks now) as the current mess I feel was well telegraphed. Literally, everything could turn in either direction, practically on a dime based on a headline or a tweet. Remember, price discovery is no longer the result of sentient thought.

Both of these broad indices have experienced increased participation over the past two "ugly" sessions as have both of New York's major exchanges. That's distribution, gang. That means that fund managers are on the move. We did tell you that if the 50 day lines did break, these managers would be pressured by their managers to reduce risk. 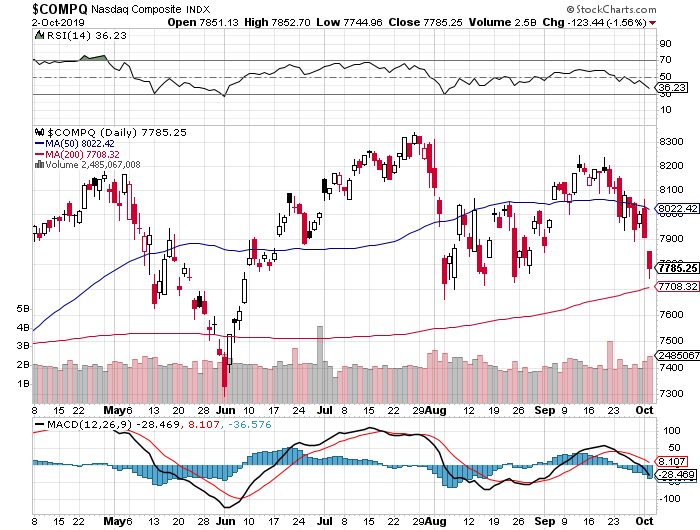 My thought on this... and I speak only for my own portfolio. The time to get back in is probably not quite upon us. There needs to be more definition in Washington, in trade, in the macro (Wait, did I just agree with that 22 year old... gee whiz). That said, for me, the time to sell aggressively has also passed.

If something makes you nervous, reduce it. If your spider sense tells you to add in spots, then add in those spots. You are smarter than these guys. I know you can navigate this.

(JP Morgan, Citigroup and PepsiCo are holdings in Jim Cramer's Action Alerts PLUS member club. Want to be alerted before Jim Cramer buys or sells these stocks? Learn more now.)

Get an email alert each time I write an article for Real Money. Click the "+Follow" next to my byline to this article.
TAGS: IPOs | Investing | Markets | Stocks | Technical Analysis | Trading