Always thought they were a lot of fun. Even the ridiculously tall or watery ones. Sometimes for training. Sometime competitive at the small unit level. One negative incident had to be in the early 1980's. Popped my left shoulder taking the rungs by swinging out three to four at a time. One does not win if the rungs are taken one by one. You've got to swing like an ape. The shoulder just slipped out. Felt it go. Over to a support beam, grabbed my left hand with my right and pulled the useless limb out, up and then eased it back in. Painful? Yes. For the uninitiated shoulder dislocations tend to hurt for about a month (I have plenty of experience). Useful? Also, yes. After a couple of rotations that kind of confirmed that I had put the shoulder back in correctly (If it's crunchy, you know that you have to do it again, or get some help), I finished the course. No, I did not win individually that day, but I had finished decently enough to keep my squad competitive in the event.

Monday morning. Plenty of headlines for investors to assess. For one, U.S. Commerce Secretary Wilbur Ross, speaking from Thailand on Sunday, sounded quite optimistic on the condition of the U.S./China trade relationship. Ross mentioned that 260 different companies had applied for licences to sell goods to Chinese telecom giant Huawei, and that these licences will be coming "very shortly." Hmm. Sure sounds like that "Phase One" trade deal, whether likely to lead toward a longer term deal or not, is in the works. Right away? Maybe not. That said, as long as the aura around a potential first step remains positive, not a lot of traders are going to be willing to get on the wrong side of the U.S. equity market, especially with cash positions known to be on the high side at many funds.

Away from the U.S. and China, a literal plethora of European manufacturing October PMIs hit the tape over the past few hours and as projected by the flash edition almost two weeks ago, these numbers were truly horrific. Why do I bring this up? Incoming ECB President Christine Lagarde will speak on Monday evening from Berlin. Why that's important is this: Lagarde will likely call on European governments to take some of the onus off of the monetary union's central bank by calling for fresh rounds of fiscal stimulus. It is no stretch to imagine that perhaps Germany specifically would be the target of such talk. Dollar valuations may not be on Tuesday morning, what they are right now. While I type, one Euro buys you $1.116.

Did I mention that Adobe (ADBE) holds the firm's "analyst day" today? What's in focus? Anything mentioned around net new Digital Media ARR (annualized recurring revenue)? Any mention here will likely impact the entire cloud. This is where a market move that seems to come out of nowhere on Monday might come from.

U.S. equity markets roared beyond an obvious pivot on Friday, after absorbing end of month flows the day prior. The S&P 500 and Nasdaq Composite both stand at record closing highs. The less focused upon Dow Jones Industrial Average has also retaken the highs of September. That said, the blue chip index still stands a rough percent below the peak levels of this past July. It's really been the season of "not so bad." Clearly, economic growth is slowing. Though the industrial side of nearly all macro-economic data reveals evidence of a recession from that corner of the economy, labor and housing markets continue to perform well, supporting consumer behavior that has remained more robust than had been expected despite wage growth that has leveled off.

Third quarter corporate earnings have also been not quite as awful as previously feared. While the results have been "not so great", the guidance going in had been worse. Through it all, we have evolved from a strictly defensive posture toward a more value based stance, and finally into a broadly exposed view still biased toward safer/revenue type plays. These markets have required such a high level of maintenance just to stay competitive as through the month of October, the bazaar mix of Health Care, the Financials, Communication Services, and Information Technology have led the way. A shorter time line reveals new momentum in both Industrials and Materials, revealing a belief in growth, inspired by positive trade talk, but not just that.

There has been a clear reassessment made by market participants as to just how comfortable they are with "growth" stocks operating at a loss. This has added to market flight into often well known names that provide dependable cash flow, not to mention revenue.

According to FactSet, now that 71% of the S&P 500 has reported, the "blended" rate for Q3 earnings growth has improved to -2.7%. For the new kids, a "blended rate" is simply a combination of earnings reported blended into projections for firms yet to report. Now, this blended rate has improved from -3.7% in just one week's time, and from -4.7% very early in the season. That might lead one to believe that the trend will continue to push growth closer to flat by the time all the laggards check in. Just remember that the last two weeks of earnings season is overloaded with consumer discretionary/retail type names, and that could skew the trend. This all said, the market will still likely finish the season with a third consecutive quarter in an aggregate state of earnings contraction. A fourth (still according to FactSet) is projected at this time. For the record, the blended rate for Q3 revenue growth remains positive at +3.1%.

Now, this is the most interesting part of the data provided by FactSet this week. The S&P 500 now trades at 17.2 times forward looking earnings, up from 17.0 in a week. As this has happened, we have seen sector based forward PEs contract for both Utilities and Staples, both trading at nearly 20 times. At the same time, valuation metrics for the Industrial, Health Care, and Financial sectors, though still the cheapest three sectors, have been reverting to mean. Bear in mind that these three groups are in an obvious way are those valuation type names bearing cash flows and revenue that we have just mentioned.

My guess? As long as trade talks do not go off the rails, that underperformers are going to have to chase the market, and this is where they'll go. Is the market in a bubble? If not, would such behavior take it there? It might. While equity markets are overvalued by historical metrics, equity prices may not be overvalued for the current environment. The Fed is working on short-term rates while allowing the long end of the curve to dangle freely. This is in my opinion, about as correct a position as the central bank could possibly be taking right now. The potential for yield at the long end is where a potential cap on valuations will come in before reaching the absurd.

A breakdown in trade talks is a danger. European money flooding the long end of the U.S. Treasury yield curve is a danger. The greatest potential for a "black swan" event? Just a kid from Queens with an opinion, but what if the illiquidity in overnight markets was caused by a bank (could be a foreign bank, could be a bank not really involved in overnight U.S. cash markets) that makes other banks guess at broad industry exposure. What if the reason for the tightness in this market is simply one of concern over counter-party risk due to a lack of trust in where the bricks have been laid?

Yes, I have opinion on the matter. Stating opinion at this point is not my job. My job is to figure out where. Where what? Where to maybe initiate an entry level purchase of McDonald's (MCD) in the wake of the dismissal of CEO Steve Easterbrook who is credited with taking the firm to new levels of execution during his tenure that began in 2015.

You know the story, I won't waste you time. The level that I am watching is the $188 level. 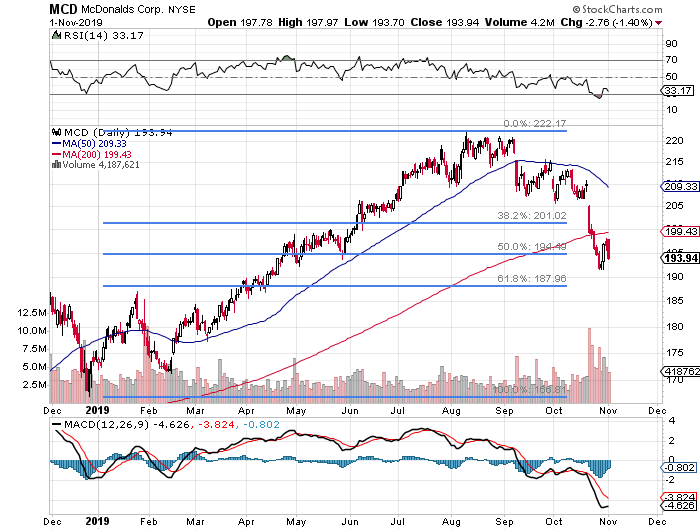 That spot presents as a 61.8% retracement of the December through August rally. The last sale that I see through the wee hours is above $189. Not that I know an equity stake should be taken. New CEO and President Chris Kempczinski moves over from having run the U.S. business. The U.S. business, while still capturing market share did underperform industry consensus this past quarter.

That said, I still prefer the shares of Wendy's (WEN) as my top pick in the fast food business. I will consider McDonald's small at $188, but that spot cracks (it was also resistance in January) and the tumble could become significant.

Get an email alert each time I write an article for Real Money. Click the "+Follow" next to my byline to this article.
TAGS: Investing | Markets | Options | Stocks | Technical Analysis | Trading | Restaurants | Software & Services