Long time coming. The road traveled seemed long, very long. How long ago was it that we were writing about how much we liked the aggression shown by AbbVie (ABBV) management in addressing the threat posed by the the expiration of patents concerning Humira, the firms' leading selling product. Humira, a treatment for rheumatoid arthritis, Crohn's disease, and a number of other maladies, has been the firm's cash cow, really since the split from Abbot Laboratories (ABT) back in early 2013. What AbbVie had done, about a year ago now, was address the potential hole in cash flow potentially created by generic competition for Humira, and to proceed with a deal to acquire Allergan (AGN) , another cash flow machine, with a cash cow of its own in Botox.

The action, after barely moving for all that time, really picked up as April turned into May. First AbbVie reported the firm's first quarter results. Earnings beat expectations, adjusted or not. Revenue also beat, while showing better than 10% annual growth. Best pace of revenue generation for the firm since mid-2018. Best sellers? Humira of course, accounted for $4.703 billion worth of sales, or nearly 55% of the entire pie. Good for growth of 5.8%, even if the European patent had already expired and sales slowed there. Growth was still good in the U.S., however, where the similar patent does not expire until 2023.

Next up was Imbuvica, a cancer drug that the firm shares rights to with Johnson & Johnson (JNJ) . That newer entry produced sales of $1.232 billion for growth of 20.6%. AbbVie even guided, which has become kind of special this reporting season. AbbVie sees adjusted EPS (sans AGN) for the second quarter of $2.10 to $2.16, and for the full year of $9.61 to $9.71. First quarter performance was strong, but also past history. Early last week, Health Canada approved the firm's Velenclexta to be combined with Roche's (RHHBY) Gazyva for the treatment of lymphocytic leukemia. That same day, the firm finally received FTC (Federal Trade Commission) clearance to proceed with the Allergan deal, of course there was some hair on the approval, but that was largely expected.

The deal, long time coming as it was, finally reached completion this past Friday evening. Allergan would not trade again, as a stand alone stock. Holders of that stock were to receive $120.30 in cash, and 0.866 share of ABBV in exchange for each share of AGN. In order to get the deal on the tape, Abbvie had to borrow $30 million in unsecured notes late last year. in addition, AbbVie has to divest Zenpep (cystic fibrosis) to Nestle  (NSRGF) , and Allergan had to divest brazikumab (autoimmune disease) to AstraZeneca (AZN) .

Prior to the pandemic, sales of Humira had been expected to land in the neighborhood of $19 billion this year, and roughly $18 billion next year. Allergan, as a stand alone company produces $15 billion to $16 billion per year, roughly $4 billion give or take, from Botox. Given that as the generics move into Humira's space in 2023, it appears to me that AbbVie has more than plugged that hole, as I find it unlikely that Humira sales drop to zero.

While debt levels are now elevated in comparison to the firm's competitors, cash flow has in my view been protected. That makes the annual dividend of $4.72 (5.62% yield) safe in my opinion. I like AbbVie below market valuation. I like the dividend even more. On top of that, I have always liked the aggressive management. 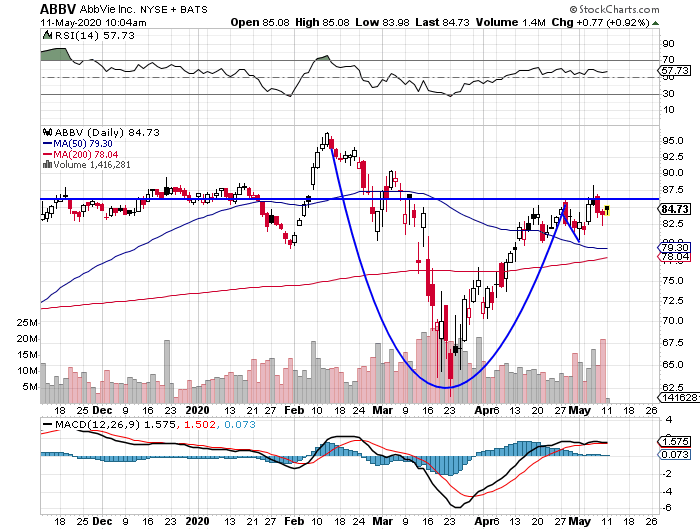 One quickly sees the failed break-out last week, coming out of a cup with handle pattern. Then again, the stock is a different animal going forward from here. The reasons to be here are valuation, dividend yield and confidence in guidance. It would help in the short-term, if we could see that 50 day SMA ($79.30) curl away from the 200 day SMA ($78.04) without actually making contact. My own level of confidence in this position is strong.

Get an email alert each time I write an article for Real Money. Click the "+Follow" next to my byline to this article.
TAGS: Dividends | Drug Approvals | Earnings | Investing | Markets | Options | Stocks | Technical Analysis | Trading | Pharmaceuticals