We've closed the books on the first half of the current quarter and as we get ready for the second half, which still has several barrels of corporate earnings to be had, let's take stock of the market's year-to-date performance and that of the Real Money Post Industrial Average (RMPIA).

The stock market continued its upward trajectory during the first half of February, with the major market indices notching gains between 2.6%-4.7%, which brought their year-to-date return for the S&P 500 and Dow Jones Industrial Average as of last Friday to 10.7%-11.0%. Drivers behind the robust year-to-date moves center on the rollback of December quarter concerns that have the Fed poised to say put on the rate hike front, the slowing domestic economy increasingly viewed as the most vibrant one, the end of the federal government shutdown and progress on the U.S.-China trade war. Indeed, last Friday's market surge reflected "extremely well" talks between senior members of U.S. and Chinese government last week with indications we are likely to see an extension for the March 1 tariff deadline.

Even with that melt-up, once again the RMPIA continued to track both the S&P 500 and Dow Jones Industrial Average during the first half of February and the first half of the current quarter. During the first half of February, RMPIA climbed 1.7%, which when tacked onto its January return saw it rise 10.5% for the first half of the current quarter. That performance was broad based with 28 of RMPIA's 30 constituents moving higher over the last seven weeks. Leading the charge for those 28 gainers were the double-digit moves that ranged between 14%-42% for PayPal Holdings (PYPL) , Facebook (FB) , Salesforce.com  (CRM) , Adobe Systems (ADBE) , Mastercard (MA) , Netflix (NFLX)  and Celegene (CELG) . In total, 17 of the average's 30 constituents rose double digits during the first seven weeks of 2019. The two constituents that dragged RMPIA's performance so far in 2019 were Amgen (AMGN) and Qualcomm (QCOM) .

Over the last several weeks, we've been tracking and sharing the declining outlook for S&P 500 earnings for 2019. As we close this week, roughly 80% of the S&P 500 companies have reported their quarterly earnings and issued outlooks. In aggregating the data, the new consensus calls for a 2.2% year-over-year decline in earnings for the current quarter, low single-digit earnings growth in the June and September quarters and 9.1% growth in the December quarter. In our view, we are once again seeing a potentially optimistic perspective on earnings for the second half of the year. While a U.S.-China trade deal and infrastructure spending bill could very well lead to a better second half of 2019 from an earnings perspective, the unknown remains the vector and velocity of the rest of the global economy. 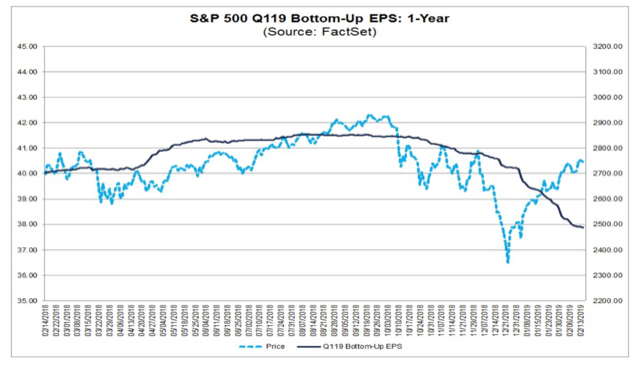 In full, the S&P 500 group of companies are now expected to grow their collective 2019 EPS by 5% to $169.53, which means that as those expectations have fallen over the last several months, the 2019 move in the market has made the stock market that much more expensive.

While the preponderance of RMPIA constituents are poised to deliver 2019 EPS growth far ahead of the S&P 500, there are several companies that are poised to deliver modest 2019 EPS gains and, in some cases, declines compared to 2018. Examples include Apple (AAPL) , Qualcomm (QCOM) and Gilead Sciences (GILD) , but given the long-term nature of RMPIA we are more focused on their multi-year stories given the rollout of 5G mobile technology and their R&D pipelines that should drive top and bottom line growth beyond 2019.

We are also hearing of rising delinquencies not only for auto loans, which has hit a multi-year high, but also for student loans as well. Student-loan delinquencies surged last year, hitting consecutive records of $166.3 billion in the third quarter and $166.4 billion in the fourth. We've also noticed an uptick in credit card delinquencies as well this past January. What we find concerning is this record level of delinquencies are occurring even as the unemployment rate remains at multi-year lows, which suggests more consumers are seeing their disposable income pressured - not a good sign for a consumer-led economy. For investors this means being more selective and patiently navigating through the current earnings season, which has yet to include retailer earnings. The December Retail Sales report may not be as rosy as some had expected previously.