After panic swept through the tech sector throughout the month of October, TheStreet's Jim Cramer proclaimed the cloud is back during his "Mad Money" program Wednesday night.

Yes, investors are once again clamoring for high-growth stocks, like New Relic (NEWR) , which is seeing accelerating growth and an accelerated stock price.

Speaking of price, let's check out the charts and indicators.

In this daily bar chart of NEWR, below, we can see that prices doubled in the past 12 months from around $55 in late November and December to the $110-$115 area in July. Prices stalled in the $95-$115 area for about three months and dipped in September and October to the $80 level.

Prices broke under the rising 200-day moving average line in October but another leg lower did not develop. Prices just rallied back above the long-term moving average and above the declining 50-day line. Resistance can be seen in the $105-$115 area.

The daily On-Balance-Volume (OBV) line shows a bullish rise to early June followed by a plateau and then a decline from September. From here a rising OBV line will be constructive but a breakout over the June high is really needed to get the bulls moving.

The Moving Average Convergence Divergence (MACD) oscillator gave a cover shorts buy signal in early October but has yet to cross above the zero line for an outright go long message.

In this weekly bar chart of NEWR, below, we can see some interesting developments. Prices are back above the rising 40-week moving average line but chart resistance from $100-$115 can be seen.

The weekly OBV line shows a peak in June and weakness into October telling me that there has been some good selling and liquidation of long positions.

The weekly MACD oscillator has been bearish since early August but could be narrowing to a positive signal in the weeks ahead.

In this Point and Figure chart of NEWR, below, we look at price reversals and ignore volume and time. The chart currently shows an upside price target around $105 - into the bottom end of resistance. 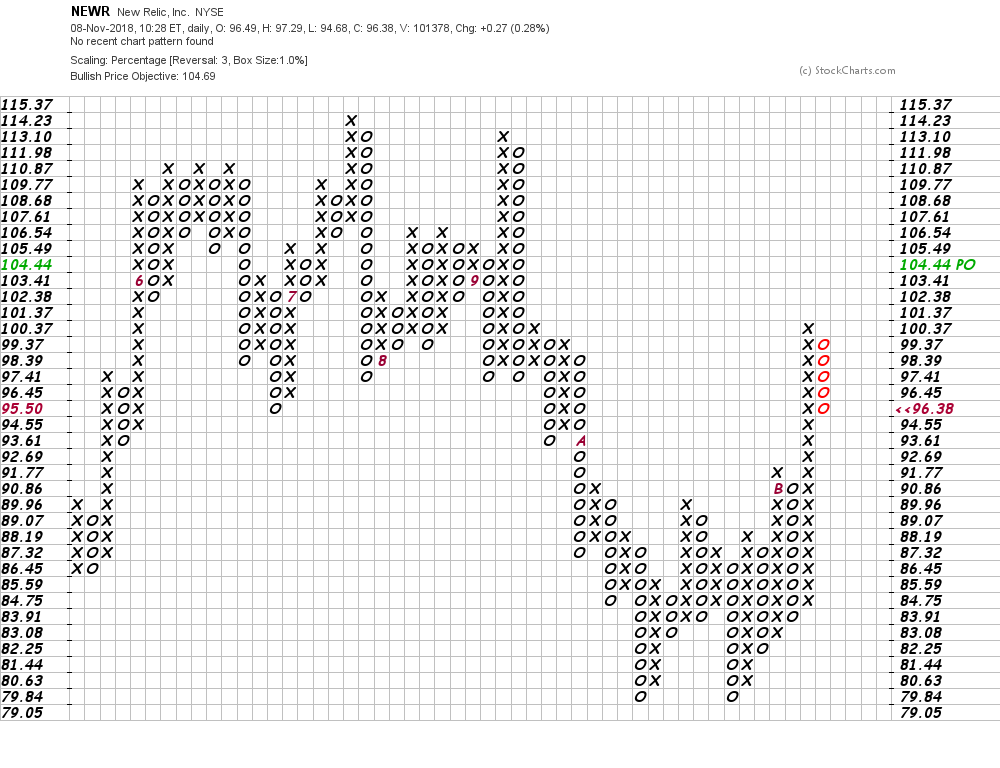 Bottom line strategy: If NEWR did not have three months of overhead chart resistance I could get more excited about the upside potential. Maybe after more sideways price action we will look at the long side.