In Thursday night's Mad Money program, Jim Cramer told viewers that there are still plenty of opportunities for individuals to buy individual stocks. Before you capitalize on those opportunities, however, you must know the risks. Cramer identified five risks that investors need to consider.

One risk was with Johnson & Johnson (JNJ) and Facebook (FB) , two long-time favorites of Jim. He said JNJ is a fabulous company, but with the recent $29 million verdict against it and thousands of other lawsuits pending, it's enough to rattle even the most steadfast investors.

Trading volume was heavy back in December on the cancer-talc news and it has dried up (no pun intended) over the past three months. A rally on light volume is always suspect as it shows a lack of commitment by the bulls.

The daily On-Balance-Volume (OBV) line goes flat in late December through most of January - the best time to have bought JNJ for a trade to the upside. The OBV line does creep higher from late January but it is still below the best levels since back in November.

If we look back at November we can see that the $140-$149 area was a resistance zone and longs who were surprised by the December break are probably anxious to "get even" if JNJ can push just a little higher. The middle of the long red candle from December can also act as a resistance area.

The 12-day price momentum study in the bottom panel shows that the rate of the advance has slowed from February into March - another sign that signals that the bulls are losing their grip, so to speak.

In this weekly bar chart of JNJ, below, we can see that prices have made very little upside progress the past two years. Prices are above the rising 40-week moving average line but a small decline will test/break that trend.

The weekly OBV line shows a decline from the middle of 2017 and suggests a long period of distribution (selling) of JNJ shares. The Moving Average Convergence Divergence (MACD) oscillator shows lower highs the past three years and is now right on the zero line.

If prices continue to rally then we should get a buy signal here but if prices roll over soon a buy signal won't happen.

In this Point and Figure chart of JNJ, below, we can see an upside price target of $168 but we can also see where the heavy volume has been traded (left scale).

Key support is in the mid-$120's and if that support gives way then JNJ has made a major top. 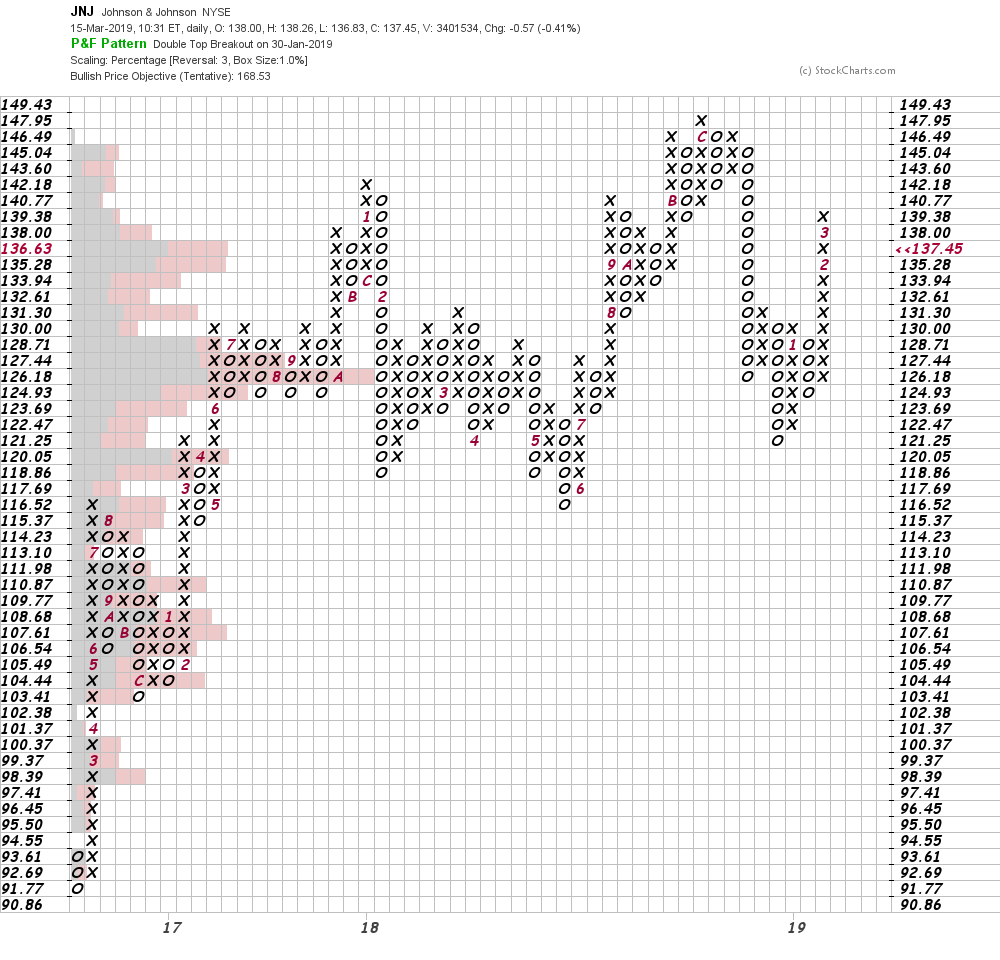 Bottom line strategy: If you are long JNJ I would suggest raising sell stops to a close below $135.

(Johnson & Johnson and Facebook are holdings in Jim Cramer's Action Alerts PLUS member club. Want to be alerted before Jim Cramer buys or sells JNJ or FB? Learn more now.)

Get an email alert each time I write an article for Real Money. Click the "+Follow" next to my byline to this article.
TAGS: Investing | Stocks | Technical Analysis | Trading | Health Care Equipment & Services | Pharmaceuticals