Risk on. Equity index futures are trading higher overnight. Huzzah. I have already heard fellow pundits (who out of courtesy, I will not name) on the radio and on television credit President Trump's mention on Monday night that he is "looking very seriously at a capital gains tax cuts and also at an income tax cut for middle-income families." Would I love such a thing? Of course.

While this has certainly put some "umph" in U.S. futures markets, this is the easy explanation, and certainly not the reason why Japanese, Indian, and virtually all European equity markets are trading a rough 2% higher. Something bigger, something deeper is going on. One is going to have to dig a little deeper than doing a Google headline search prior to appearing in the financial media.

Which spread? The spread of the virus? No. By the way, that spread finally seems to be slowing down just a bit. Let's hope this slowing down of growth is one that continues. This deceleration of the rate of infection, which is tenuous at best, may just be a statistical aberration. That said, nationally the number of new cases does appear to be off of the highs and at least trying to trend lower. Long way from where we need to be. No doubt. That said, and this is coming out of a weekend, so the actual reporting could be wonky.

There are many factors, not just some hope around the slowing of viral trends, or some off the cuff presidential commentary, that are impacting financial markets at this moment but the markets are indeed spreading the wealth. That could be a clue of some substance.

Sure, the Nasdaq Composite just posted a second consecutive losing session. On Friday, there were sure signs of profit taking. Same on Monday? Meh. Don't see it. For one, trading volume at the Nasdaq market site declined on Monday from Friday. For another, the selling pressure that markets did see occur on Monday was very specific. Even at the Nasdaq, winners beat losers by about 3 to 2, and advancing volume beat declining volume by almost 2 to 1. Not exactly ringing the bell of professional distribution. What managers sold on Monday was narrow indeed. They sold Biotechs, internet names, and software. Not much else, and they even took the pressure off of those groups as the day wore on.

Where did the money flow? Toward the kinds of shares that rely more upon economic growth than those they sold. The S&P 500 put in its seventh straight positive day, led by Energy, the Industrials, Discretionary type names, Materials, and Financials. Of course this kind of action put some support beneath the Dow Jones Industrial Average, often considered the very least of our three major indices by investors in terms of importance due to its narrow scope. They bought up Nike (NKE) , Caterpillar (CAT) , even Boeing (BA) , and Raytheon (RTX) . Aerospace was indeed in favor. So were the airlines. Hmm...

So was Fed Ex (FDX) , which brings us directly to the Transports. Have you realized that the Dow Transports have now posted 9 (nine) consecutive winning sessions. Nine, cowboy!!! Count 'em. Almost two whole weeks. Take a look for yourself. 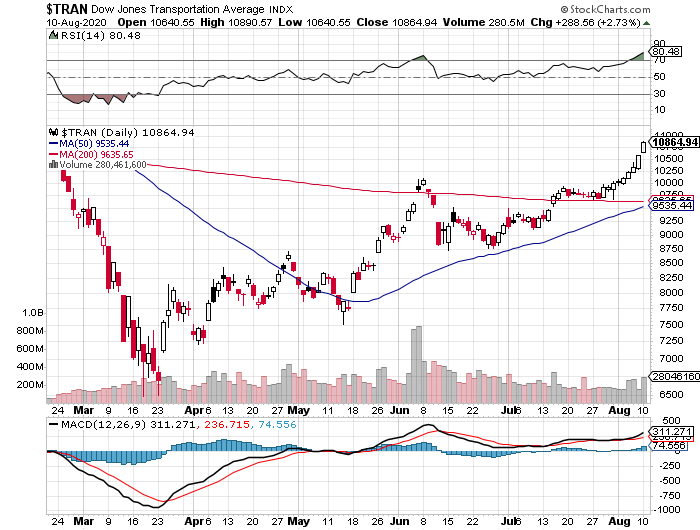 Overbought? Okay, I see that. I also see this index on the verge of a "golden cross." Suddenly, while many of us were staring off into space... wondering just when something like a normal life (even a new normal life) might begin anew, the Dow Industrials and Dow Transports start confirming each other. Foolproof? Foolproof does not exist n the year of the Murder Hornet, but that is in a microcosm, Dow Theory. Oh, by the way, the small caps are hot too. Another group extremely sensitive to underlying economic conditions. The Russell 2000 has put winners to the tape for five of the past six days.

From Russia, With Love

Of all factors impacting our marketplace right now, do I really believe that some deceleration in the rate of infection is indeed having such a positive impact? Not sure. I want that to be true. I don't trust it. Geopolitical friction between the U.S. and China was a big deal. The way the economy is now, and the way it will be rebuilt, makes China a lot less important to the U.S. economy than that nation was. Still good for aerospace and defense spending though.

The election could be a negative, but I am not so sure how negative. The Trump administration has of course been very business friendly. That said, I am not exactly sure that the market fears a Biden administration right now. That might change, but that is not at the top of investor thinking at this time.

What I think this broadening rally smells like, and I could be wrong, is that markets truly believe that our legislature will agree to a fiscal package this week that the administration can live with. Even bigger than that, markets may believe that we are a whole lot closer to the effective use of vaccines and therapeutics than we know in this battle against Covid-19. As I just typed out this sentence, news breaks out of Russia about that nation's vaccine that sounds positive. It appears that Russia is not only already inoculating people, but that Russian President Vladimir Putin's own daughter has been dosed. If these scattered reports are true, this is huge.

In addition, Regeneron (REGN) has announced that Phase 3 (late stage) trials for that firm's REGN-COV2 candidate, which is a therapeutic cocktail, could be used to provide immediate treatment to those actively infected, while also possibly preventing those under treatment from spreading the disease. Word is that we may see supportive data for this cocktail by late September, which would be well ahead of expected data from our earliest vaccine candidates from Moderna (MRNA) and the collaboration between Pfizer (PFE) and BioNTech (BNTX) . BioNTech reports this morning, by the way.

1) Did you happen to notice that the federal government got paid in July? With the tax deadline moved from April to July this year, the federal budget deficit from one July to the next actually shrunk. No, we are not okay now.

2) If U.S. companies are banned from doing business with apps such as WeChat and TikTok, does that mean Apple (AAPL) will sell far fewer smartphones abroad? In China? Just wondering.

3) Peloton (PTON) reports in about a month. That firm crushed expectations back in May. Nautilus (NLS) reported last night, That firm experienced a 93.5% increase in revenue. Last week, Planet Fitness (PLNT) put a 77.9% decrease in revenue to the tape. Once we as a people start living our new normal, how many folks return to the gym, after spending good money to work out at home? I do not know the answer. I just spoke with a local gym owner. She was very uncertain.

4) What is Theta? Some folks occasionally ask why I sell so many more options than I purchase. This is why. Theta is, simply put, the measure of declining time premium value across the options market, assuming constant prices for underlying equities. In other words, puts and calls generally go down in value as time passes and expiration draws near. I don't often buy anything besides my cars that are designed to lose value.

Get an email alert each time I write an article for Real Money. Click the "+Follow" next to my byline to this article.
TAGS: Economy | Investing | Markets | Politics | Stocks | Technical Analysis | Trading | Coronavirus