Monaco said Enbridge has the best, demand driven assets in the business that are delivering predictable and growing cash flow. The company is also well positioned for a lower-carbon economy. Enbridge just completed bringing $10 billion of new assets into service, he said, and those assets are accelerating their export business which has allowed them to continue boosting their dividend payout.

When asked about the company's new natural gas export facility in Texas, Monaco said North America is in a tremendous competitive position when it comes to liquified natural gas. Both the resources and the technology are available to supply the world with cleaner energy.

Monaco was less bullish on the outlook for the Northeast region of the country, however. He said that gas prices will need to move even higher before the politicians will finally allow new pipelines to be built. The Marcellus shale region in Ohio has all of the natural gas the Northeast needs, he said. All that's needed is a pipeline to deliver it.

Enbridge is also a leader in the clean energy movement, he said. Not only does natural gas produce less carbon that oil and coal, but the company is also building new technologies for carbon capture, usage and storage. The company has been in the wind and solar business for over 20 years, and has projects with hydrogen also in development.

Let's check and see if all this good work has translated to a strong stock chart. Back on October 6 we checked on the charts and recommended that "The charts and indicators of ENB are bullish so traders could approach the long side of ENB. Use a stop below $38 for now. Add to longs above $41. Our 2022 price target is $68."

In this updated daily bar chart of ENB, below, we can see that prices retreated from early November to now and may have stopped out traders unless they used a stop below $37. ENB is trading below the declining 50-day moving average line and below the cresting 200-day line. Trading volume has been heavier than average since early November and that could mean a shift in ownership as some weak hands sold and other investors with vision and deeper pockets bought.

The On-Balance-Volume (OBV) line turned lower in late October. The 12-day price momentum study in the lower panel shows a bullish divergence with a higher low from early December to mid-December while prices made equal lows. This is a small pattern but it can still generate a rally.

In this weekly Japanese candlestick chart of ENB, below, we see a mixed picture. Prices have turned lower and have broken below the 40-week moving average line. The doji pattern last week has not gotten bullish confirmation yet, but it does suggest that prices are in an area where there could be a balance between buyers and sellers.

The OBV line shows some weakness in October and November but may be stabilizing in December. The slow stochastic indicator - a measure of overbought and oversold conditions - is very oversold. This is not a buy signal but does suggest we can be prone to a bounce.

In this daily Point and Figure chart of ENB, below, we can see that the software is projecting a possible downside price target in the $33 area. A trade at $36.02 is needed to weaken the picture. 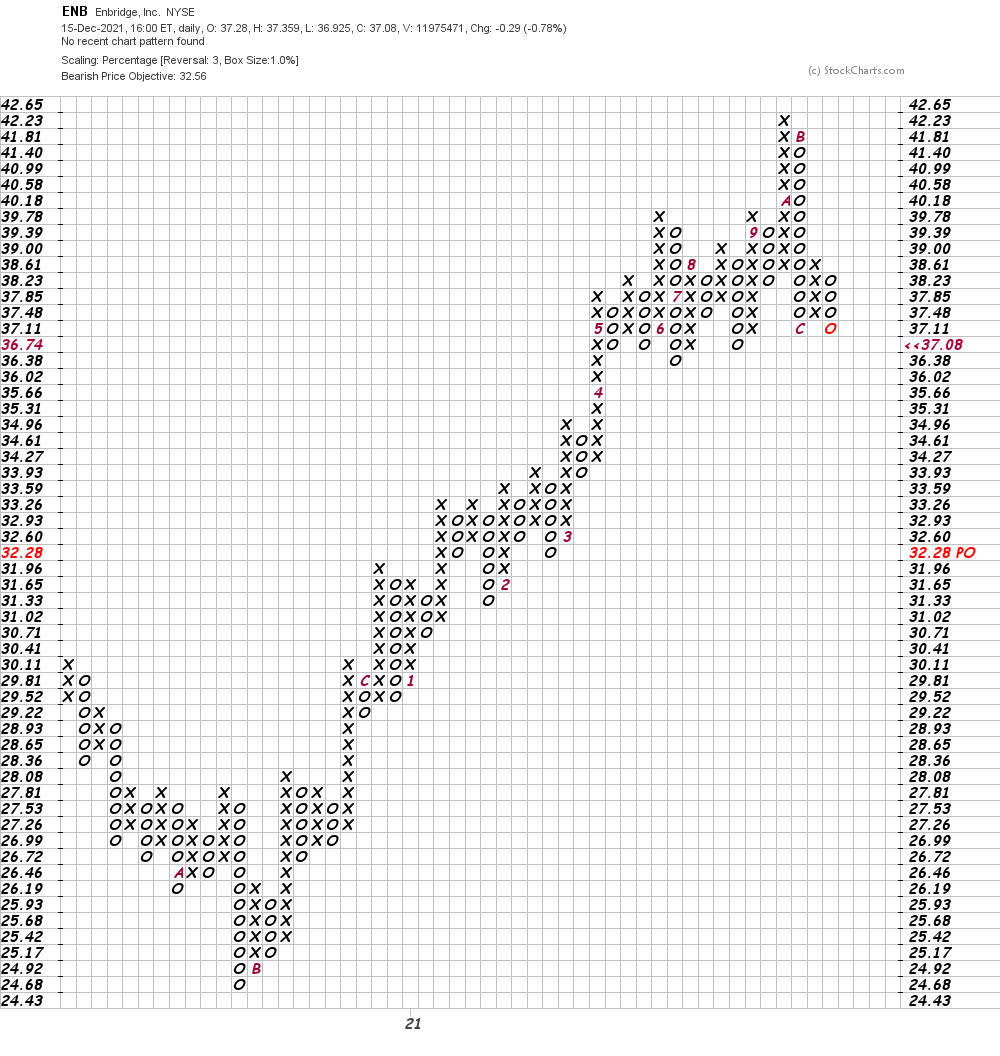 In this weekly Point and Figure chart of ENB, below, we can see a potential longer-term price target in the $76 area. 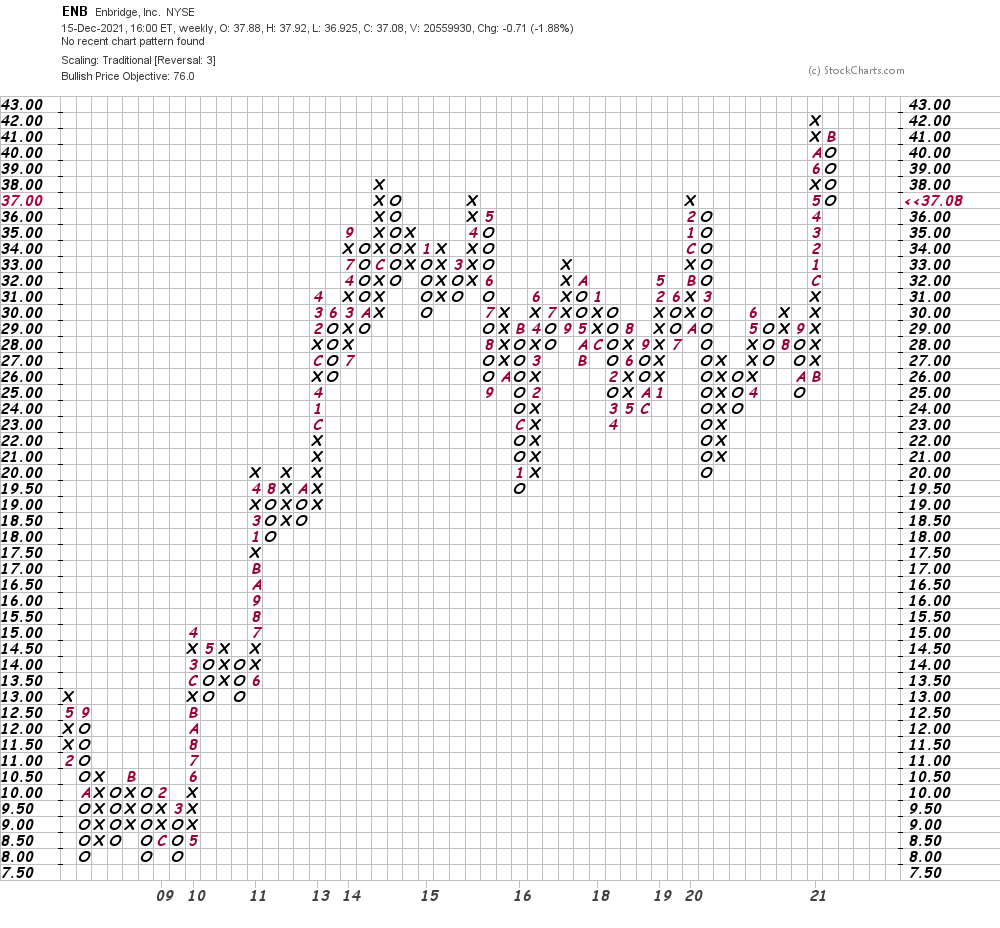 Bottom line strategy: Traders who are still long ENB should hold but with a stop at $36. Strength above $39 should be used to either rebuy ENB or add to longs.

Get an email alert each time I write an article for Real Money. Click the "+Follow" next to my byline to this article.
TAGS: Investing | Oil | Stocks | Technical Analysis | Trading | Energy | Natural Gas | Mad Money | Executive Interview