Every day, or so it seems, I receive e-mailed questions asking just how far is too far? Do these equity markets need to pause? The answer is "eventually." Not a soul can tell precisely when the worm will turn, but stocks in my opinion are not necessarily overvalued for the current environment. I see Relative Strength. I know it's elevated. Investors and traders must accept that price may or may not be the truth, but price will always be fact. You know what else is a fact? Your P/L ratio. So, let's all move past our personal biases and embrace what is, and not what maybe we think should be. In one word, adapt.

Now that the Dow Jones Industrial Average has moved to new highs, though not one of my preferred measures for equity market performance, all three "majors" stand at record closing levels. Small Caps as well are enjoying this robust market behavior. Both the Russell 2000 and the S&P 600 sat at their highest levels since before the summer as the closing bell peeled it's last. Trading Volume? Very active. Especially for a Monday. Both of New York's exchanges experienced elevated levels of activity, while aggregate volume for S&P 500 constituent companies landed at it's highest level on an "up" day since late June. Just for the record, advancing volume topped declining volume by better than two to one at both the New York Stock Exchange as well as the Nasdaq Market Site.

How positive are traders? Are traders even bothering with the purchase of downside protection. Anyone else take a look at the CBOE Put/Call ratio for Monday?

While it is certainly true that this ratio can present as a contrary indicator, this nearly two year low of 0.65 may very well just be the result of a change in perception around a number of risk factors that had already been negatively priced in. Until a few weeks ago, that is.

Investors must understand that the narrative around trade with China has evolved as the two sides work on a "Phase One" mini-trade deal, but this is about much more than that. U.S. domestic macro has been better than thought. Corporate earnings have been better than thought. The story around Brexit is more optimistic. The Federal Reserve is rapidly growing money supply while targeting the correct end of the Treasury yield curve (that's huge), and the ECB appears set to move ahead with Mario Draghi's planned renewal of their quantitative easing program.

The real beauty off the current rally has been in the broad quality in the names most benefiting. While valuation metrics have expanded into historic territory (which is fine in this environment), it is the Energy, Industrial, Health Care, and Financial sectors that are reverting toward mean (improving), while sectors such as Utilities, and Staples suffer from that same gravitational force (decreasing). The Information Technology sector remains an ecosystem unto itself, as certain semiconductor types competing for the smartphone, 5G, personal computer and data center markets (think (AMD) , (NVDA) , (INTC) , (TSM) ) have been moving with the outperformance of "value" stocks, while those more reliant upon growth than profitability have certainly stumbled out of favor. You know what they say... when a firm operates at a per-unit loss, sales growth is not a good thing.

One just has to love (well, at least the author) when one sees any given pundit anywhere in the media, who clearly does not "get" the marketplace takes a shot at the validation that the yield curve, inverted or not provides for investors trusted with making real-timed decisions. First off, stop quoting the 2 year/10 year spread. Since the beginning, we have made plain that the 3 month/10 year spread was key. Readers know that I have adjusted my own portfolio bias based upon this spread, and voila... this has been working well for the time being. This is the spread that provoked the Fed to act, which is one major factor in recent market behavior. Take a look at the three month snapshot.

Yup. Still in control. As long as the Fed pressures the short end of the U.S. Treasury curve while allowing the long end to dangle in the wind (also known as free market pricing), while easing liquidity needs... economies (such as ours) can grow. Based on this, my belief is that equity markets can succeed while free market pricing for longer term debt will naturally cap these very same equity market valuation metrics at levels short of what might accurately be perceived as a "bubble." Everyone with me? This is not rocket science.

How many cards would you trade for Seaver? I'll tell you what. You had a Seaver, and that card stayed in a cigar box. At home. Never even made it to the school yard. You weren't flipping that card, and you weren't trading it. There was no price.

That said, in the business of fair trade, there is always a price. This is why there is a bid under U.S. equity index futures through the wee hours this morning. According to multiple media outlets, the Trump administration is debating rolling back $112 billion worth of 15% tariffs already levied on Chinese imports as of September 1st as a concession aimed at bringing something back from the Chinese side. Rumor, and it is really just rumor until there is news, would be that in exchange, the U.S. looks for some kind of improvement made for the provision of protecting U.S. intellectual property, as well as quantifiable certainty regarding just how aggressively China plans to purchase U.S. agricultural goods.

Risky game? You bet. Cause for optimism? Yes. Unless the game breaks down. How many cards for Seaver? Doesn't matter if you throw in Palmer and Catfish? This is Queens, and that's our guy. Maybe if you throw in a "Joe Willie" or "Clyde".

The "Skinny" on Defense and Aerospace

I know many of you wondered just what the heck was happening to our beloved defense industry names on Monday. You told me yourselves. The group suffered a serious beat-down, out of sync with broad market behavior. Kratos Defense (KTOS) , the drone specialists expected to report tonight took perhaps the worst beating in the bunch. So what gives? Folks, it's about the money, or lack thereof.

While partisan divides in both the House and the Senate over a number of issues have prevented passage of one NDAA (National Defense Authorization Act), Senate Armed Services Committee Chairman Jim Inhofe (R-OK) has come up with the "Essential National Security Authorities Act for Fiscal Year 2020", which is being referred to as a "skinny" NDAA.

In other words, as issues such as presidential powers over funding for a border wall, benefits for transgender service members, and what to do with Guantanamo Bay cause a potential slowdown or full stop in military spending, this backstop measure would at least maintain the military at a mission capable status.

The larger problem is this. There are little more than three weeks worth of legislative days left in the Senate's calendar year. Just over two weeks for the House. Obviously, both are consumed with the impeachment inquiry ongoing in the House at this time. It is expected, that even once a deal on a new NDAA is made that getting the bill processed could take a rough 20 days or so. The defense names? Well, I expect many more days worth of volatility for the short-term. You know where my exposure is. Yet, watch as some of my names creep toward panic points I must.

Earnings Focus For the Day?

InMode Ltd (INMD) . The Israeli-based medical technology company is new to the marketplace since August. Growth has been there for both sales and earnings. Stock has been on a tear. One to keep both eyes on. No, I'm not long yet. 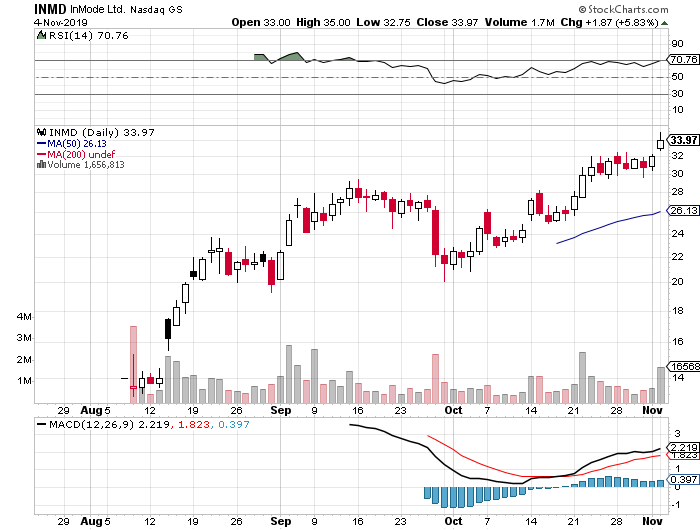 Get an email alert each time I write an article for Real Money. Click the "+Follow" next to my byline to this article.
TAGS: Earnings | Economy | Investing | Markets | Stocks | Technical Analysis | Trading | Defense | China