Financial markets. Sunday night into Monday morning. Really ugly, really quickly. Apparently, Saudi Arabia did not take very kindly to Russia's decision to not get on-board last week with production cuts. Price war! Now, oil markets will suffer not only a shock to demand due to a global economic slowdown in the face of this Covid-19 virus, but now as the Saudis ramp up production while lowering prices there will likely be an increase in supply. Remember the Saudis don't need much to turn a profit.

It also does not take much of an imagination to picture just what this will mean to the Energy sector this morning. It does not take much imagination to picture just what this means to U.S. shale production and some of the weaker, more highly indebted hands in that space. There will in all probability be the threat of coming bankruptcy for a few. This will hit financials, at least some of the less diversified regional banks, as hard as it does those in the energy space. Then comes labor.

So... you have the Saudis putting the beat-down on Energy, which in turn will slap the Financials around. Once the financials are getting their beating, where else does the "Ugly Stick" show up? Contagion. While humans spread this coronavirus among themselves badly slowing economic activity due to both illness and fear, an oversupplied (for this environment) energy market will set off weaknesses that may have been completely unexpected very recently. This, by the way, will also reduce demand for the U.S. dollar. Note this morning's dollar weakness as commodity based demand for the U.S. currency ebbs. In addition, one must also consider the probability that as the world suddenly needs to becomes less global that foreign investment must also leave the country in order to meet obligations at home.

The question begs... "Do significantly lower oil prices provoke increased demand?" Anywhere? People are being told to stay off of aircraft and cruise ships. The rails do best when the cargo carried is highly valued. At this point, is it silly to mention "recession"?

Probably not. As I work my way through this morning note, the U.S. 10 year note yields 0.488%, and that is well above the lows. The entire curve right out through the 30 year bond now yields less than 0.88%. Though the entire curve has been mangled badly all night, as we approach what most humans refer to as morning, the nadir of the slope has once again appeared in between the two year and three year notes. The slope, as flat as it is, normalizes (though hardly normal) fro three years out. The bond market is telling us that economic contraction, even if not the textbook definition of recession, is nearly imminent if not already under way.

As to policy, Fed Fund Rate futures trading in Chicago at last glance were pricing in another reduction of 75 basis points at the March 18th FOMC meeting. That's just a week and a half away, so do not expect to hear from any Fed speakers possibly shedding light on this issue as we have entered the "blackout period." What does seem likely right now is a more coordinated response as the ECB steps to the plate this Thursday.

Keep in mind also that the U.S. Treasury brings $24 billion worth of 10 year paper to market this Wednesday, and then $16 billion worth of 30 year debt on Thursday. It may be too late to jack up the size of issuance in these two cases as those announcements went out last week. May I suggest pushing out maturity on future borrowings, this creating scarcity at the short to be consumed by the central bank, while also placing as much upward pressure on the long end as possible. Time for a "special", large 50 year bond? Yes. Time.

We know that rough markets strike every once in a while. That said, we are not that used to witnessing markets collapse due to the fear of a spreading plague. Are we overreacting? Heck, I don't know, but I guess I will. Now, take a breath. We have been working on this all along. It never feels all that great to lose money on paper, even if one significantly beats the broader market. No "woulda, shoulda, coulda"... we continue to identify where we think increased danger or increased opportunity lurk. We will overcome, but understand that in order to do so, we never stop adapting. Not ever. You become whatever it is that you need to be whenever it is that you need to become whatever that is. Got me? If people count on you, there is never self-pity. None of that. Ever. Fail miserably? All of us have. What did you learn? There better be an answer.

We have made ourselves ready. Cash levels are elevated, as is exposure to gold. Portfolios have been rotated. We may have taken a beating, we may take another right here, right now, but we will carry on. That is who we are. We are not defeated until we admit that we are beaten. Have you been beaten? Not me. Not ever. There is only "I've got this", and "I'm working on it." Don't you dare say they beat you. We are better positioned to take any actions we think required due to the preparations we have made. We will get through this, and we will help each other.

I know that you are frightened. Nothing wrong with that, as long as that fear is not permitted to control your actions, nor thoughts. Remember this... "No heroes"... we don't "take shots" because we think of ourselves as old-fashioned gunslingers. Action taken must be for a reason that one could explain to a child. Make this the case, and even if wrong, at least one knows that this action was thoughtful, yet a the same time... not overthought.

"Success is not final, failure is not fatal, it is the courage to continue that counts."

Meditate on the words of Winston Churchill for just a minute, How precious? "Success is not final." Done good? Excellent. Did you you then turn and help others? Did you pat yourself on the back, and forget that there even are others? "Failure is not fatal" How beautiful. I have failed, have you? I have failed more than once. Yet, here I am, on this side of the dirt, married to the girl of my dreams for decades, having raised the children that I had prayed for. Have had ups and downs too many times to count due to my natural state of aggression. Still, I know that I am blessed. I know that I will always figure out what I need to do. I know that I will not be beaten. If that's courage? Then fantastic. If this is simple foolishness, please do not tell me, for my belief that "I can" has served me well. I like to believe that this is courage. For not one among us truly knows if we are brave, until we need to be... some more than once.

"You will never do anything in this world without courage. It is the greatest quality of the mind, next to honor."

Before we move on, think on this. You and I will need to be aggressive at some point even when the impulse reaction is to find a place to hide. I believe it true that we will need a certain level of personal (not necessarily physical) courage in order to accomplish our mission. Yet, how much easier to accomplish if one has been tested through temptation and passed these trials. To keep one's honor clean in the end makes all things possible. Yet, effort toward that end is required at all times. This is no moral lecture. I do not judge. That is not my place and never has been. Just my belief that the human integrity created by one's intent to maintain, or even regain one's honor, is the cornerstone that the very essence of humanity is built upon. We are not all good, but most of us want to be. Excellence in all things begins inside the heart. The impure even more welcome than others. For they have returned. We can do this. All of us. We can.

While the world burns around us, let's take a look at two charts that are working right now. 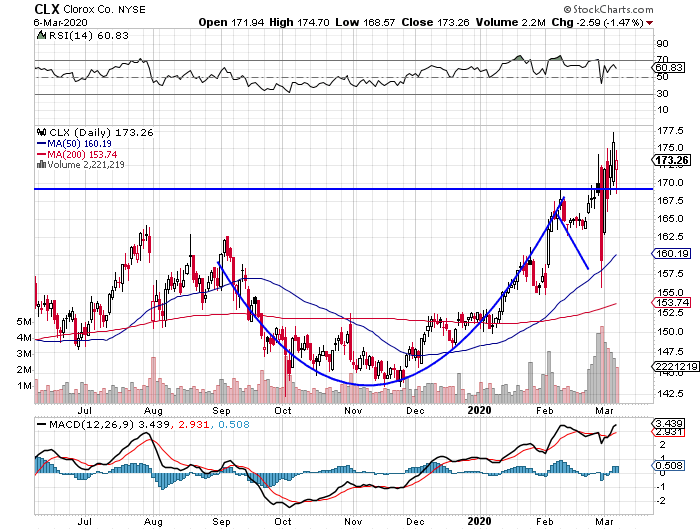 Readers are well aware that cleaning products mad by Clorox (CLX) have been in demand as Covid-19 has spread. Is this sudden demand just transitory? My guess is that even should the coronavirus be a temporary issue to contend with (and it may not be) that concern over being exposed to unwelcome germs is probably going to stick.

- Pivot: Honestly not sure whether to place the pivot at $160 or $168. There are kind of two handles. Hence, I chose a rather low target price Target could be as high as $201. We'll have to watch. 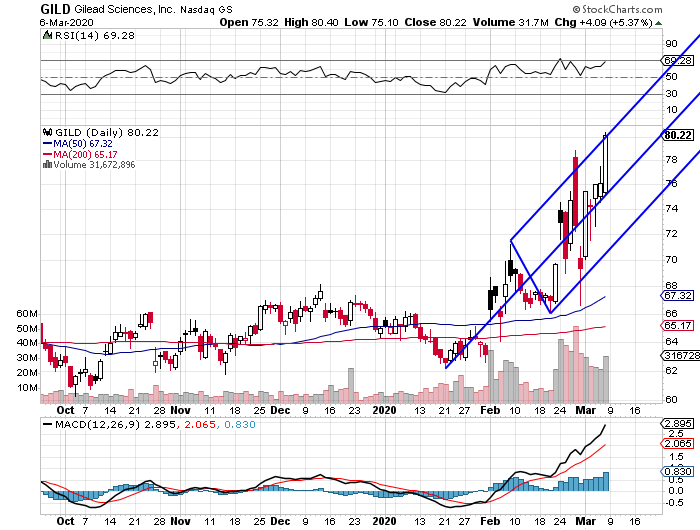 As I see it, Gilead Sciences (GILD) has started to construct a Pitchfork model after a full year of moving sideways. Given the fear permeating the public, as well as the broad need to keep an economy set to struggle from getting that far, there has been keen investor interest in labs that don't just appear to be working on vaccination, but treatment. Gilead is such a play and is being assigned an increased speculative valuation by investors.

Twice now, GILD has tried to break out above the still forming upper trend line. Hence, this chart itself is a work in progress.

There are no significant domestic macro-economic data-points scheduled for release today.

(Clorox is a holding in Jim Cramer's Action Alerts PLUS member club. Want to be alerted before Jim Cramer buys or sells CLX? Learn more now.)