I looked at the S&P relative to the QQQs and found it interesting. The February low in 2018 gave way to a large outperformance by the QQQs over the S&P. Just look at the downtrend from February through the summer. The only relief was in March and April but away from that, it was all QQQs which is another way of telling us how narrow the market was in the first half of the year last year.

Now look at what happened in the summer. This ratio spent three months banging around the bottom and was unable to continue down. Well before the October spill the S&P was already outperforming; notice the higher low in late September.

But then that S&P outperformance peaked in November and hasn't regained its footing yet. I admit the pattern seeker in me sees the potential for a head and shoulders bottom but I find ratio charts are best not used that way. Rather I pay attention to higher highs and higher lows and lower lows and lower highs. As the big cap tech names get set to report earnings next week that 1.6 level will be important to watch since we have twin lows just over that area from mid-December and mid-January.

One reason to be focused on it is that the number of stocks making new lows has been creeping up for Nasdaq. Wednesday brought us 48 new lows which is the highest since January 3 (that was the day Apple (AAPL) pre-announced earnings). And that rise in new lows has the 10-day moving average of Nasdaq's new lows curling under. 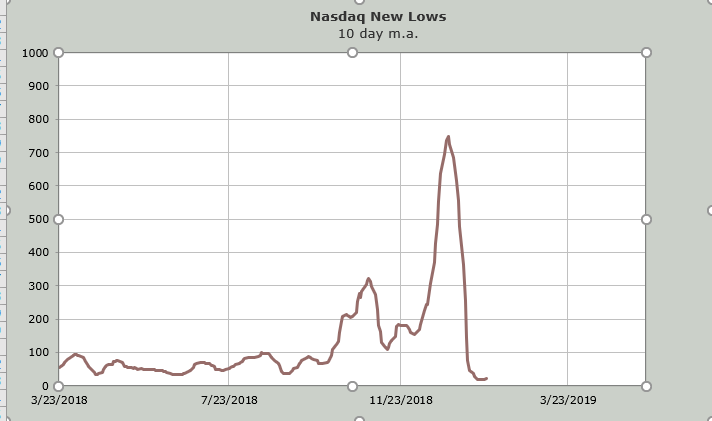 Keep in mind that part of my thesis on why we would get a retest (written on December 31) was that when you get a spike in the number of new lows it gets tested at some point (often a few months later).

Away from that, the one indicator that caught my eye during Wednesday's up and down ride was the put/call ratio. Late last week this indicator had sunk to 80%, after not showing a reading under 90% for weeks. Wednesday this metric shot right back up to 116% showing folks shifted sentiment from last week to this week in a hurry. In other words they went from buying calls on Thursday and Friday to puts on Wednesday.

For my part I still think the market is working off the short-term overbought reading. You can see the Oscillator continues to come down.