Some of you will recall not just the stock market crash of Black Monday, 19 October 1987, but also the volatility experienced throughout that entire week. On that extremely intense day, the Dow Jones Industrial Average hit the bricks to the tune of 508 points. At the time, a 23% drop, so obviously, modern markets are not truly comparable. I worked that day, what was known at the time on the NYSE trading floor as Booth ZZ, in the Main Room right under the podium where they ring the bell. My point this morning is this. Some of you will recall that financial markets stormed in some cases more than half way back within a day or two, but confidence had been shaken. A new era in volatility had dawned that would also spawn the mini-crash of October 13, 1989. The blue chip index, thankfully only fell 7% that day. Again, I was in Booth ZZ.

Traders and investors of that era had, by force, become desensitized to the increased level of volatility. Over time, a lot of time, due to market inventions such as, at first circuit breakers, but eventually increased passivity in public investment styles, and a decade of perversely loose monetary policy would allow for an unrealistic skew to seep into broad investor class risk assessment. Earning 0% elsewhere will do that.

That very same Dow Jones Industrial Average, now 10 times larger than it was in 1987, has run roughshod over the marketplace in the past five sessions in such a way that in each of those five days, the range of the index has sculpted 500 point daily swings and 2% moves into a "new perception of normal."

I see it in my email. I see it on Twitter. Concern that passive investment has grown to the point that it has become to itself, a danger. Concern that quick thinking humans operating at the point of sale have been replaced by algorithms chasing headlines, while trading in micro-second executions. Algorithms that unlike their human predecessors just can't say "no" to poor price performance.

For many traders, who may have entered the marketplace sometime in the last 30 years, this new reality has clashed with their entrenched understanding of risk. The first two steps that I teach new traders, or even old traders who find themselves in a jam, are to Understand, and to Identify.

The good folks of Gotham need to understand that what had seemed normal is over. Every financial adviser worthy of the title will honestly help and develop for every investor, the ability to determine his or her evolved tolerance for risk. First and foremost, I understand the anguish that some readers feel. I too, have experienced failure. More than once. Slow it down right now. Soul searching... what can you not afford to lose. You need to eat. You need to shelter your children. You need to fix the car, the roof, etc. This is your cash balance. Then add some more. Next... self esteem. You are mighty. You may at times, lose, but whether or not you are defeated is entirely up to you.

Before we move on to the next three steps in trader evolution, which are to adapt, to overcome, and to maintain, targets of opportunity must be identified. In this market, the new understanding of volatility must involve a trader cognizance of headline seeking algorithms that will move faster than the trader can think. Instead of thinking of this environment as unfair, which it very well may be.... understand what it is. An obstacle. Our mission is not to whine about what we can not control. Our mission is always to excel in the environment provided. Targets of opportunity must, in my opinion, involve a fundamental assessment of such far out concepts as balance sheet health. The tide will lift and sink all boats. At some point, good businesses will differentiate.

I will, at times, head out to Long Island's south shore ocean beaches during major storms. Call me crazy, but I find the absolute solitude of the beach magnified by the awesomeness of nature simply exhilarating. A good time and place to pray, at least for this guy. It really is not at all unusual at these times, for a surfer or several surfers to appear on the waves. Those surfers would most likely enjoy waves that might mimic today's markets.

On Tuesday morning alone, markets were strong. The U.S. and Chinese seem to be moving in the right direction on trade. Then the circus began anew. President Trump, Rep. Nancy Pelosi, and Sen. Chuck Schumer put on a show for the ages. I found the show very entertaining, but then again, I am not really a political animal. Upon returning to my Facebook feed, I found that the zealots on both sides all had an opinion, and surprise, surprise... they disagreed on which side was the more infantile. Financial markets agreed though. For as long as I have been trading these markets, any talk of shutting down the federal government is going to be met with risk-off behavior.

It was all okay though because positive headlines were lurking just beneath the surface, and as I have already mentioned, on a day to day basis, headlines outrank fundamentals. This is why I tell traders to place a post-it over their P/L on bad days. Oh, still pay attention to one's positions, especially target prices and panic points, but not minute by minute changes in profit/loss. This only creates unforced errors, and distracts from mission success.

Apparently a Canadian court would allow bail for Huawei CFO Meng Wanzhou that would permit for her a limited version of personal liberty. She still faces extradition to the U.S., but our own president has inferred that he may intervene if such intervention were deemed to be in the national interest.

Equity index futures as well as global markets are higher overnight. This may or may not be meaningful in several hours as the opening bell chimes at 11 Wall Street. So be it.

One of our very favorite cloud names reports fiscal fourth quarter results on Thursday night. That would be Adobe Systems (ADBE) . Industry wide EPS expectations are for $1.88 on projected revenue of $2.43 billion. Whisper numbers are running up to a nickel higher than that "official" consensus. One of the main reasons that I have loved Adobe over time has been their early embrace of the subscription economy. It has now been roughly five years since the firm started moving away from the old transaction model and toward licensing the firm's product line. As of last quarter, the firm reported that recurring sources were now good for 90% of revenue.

That begs the investor to ask... Does this make Adobe a mature company? Is that the end of rapid growth? The answer to that is as simple as... Is there still room for the business cloud to grow. My answer would be a resounding yes. What we are focusing on this quarter, with the stock still up more than 35% ytd, will be on segment performance.

The Digital Media segment, perhaps the most important, is comprised of the Creative Cloud and the Document Cloud. This segment saw revenue growth of 27% for Q3, and in my thinking... anything in the mid-20%'s for Q4 would be considered another monster quarter. Now, the Digital Marketing segment has been growing at a slightly lesser pace than has been the media segment. That group, containing the Analytics and Advertising clouds, grew at 21% in Q3. There has been something of a renewal in this group in terms of software, and these numbers could actually end up being the most interesting. Either way, I like the name long-term. That does not mean that as an investor, we have an all clear. 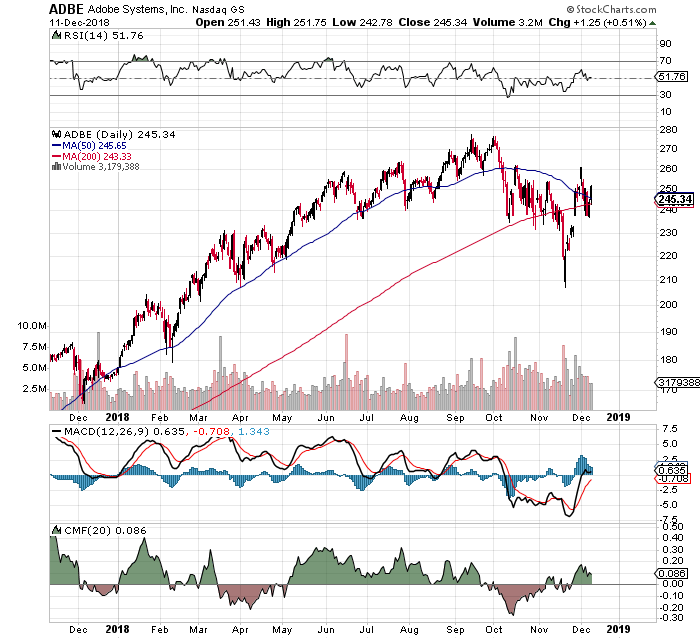 For the sake of clarity, I will use two charts over the same year plus run for this name. Here, we see two possible dangers to the downside from a technical perspective. Obviously, with the 50 day SMA, and the 200 day SMA now just 2.32 apart, ADBE, under threat of a poor earnings release, could see a negative market reaction exacerbated by a "death cross." As you can also see, the daily MACD appears set up for this.

Witnessed here are both the trend that broke in October, and then nearly a perfect 61% retracement of the gains made over the life of that trend. The suggestion here is that should there be a negative reaction to earnings, both the Fib model, as well as a declining Pitchfork pattern (if indeed one has emerged), suggest that this $208 level could be retested within a month's time. Do I expect that? Not really, but you need to know that this is out there.

Fundamentally, I believe that there is cause for a return to something close to trend. I am ever the optimist. Remember, Chinese exposure is not really a thing here, but ETF exposure certainly is.

Long ADBE, here's how to protect some of your dough. Based on last night's close of $245.34, the stock is moving, so this example will need strike price adjustment, but the idea is valid.

Notes: This "Bear Put Spread" will require a debit of $3.40 after the sale subsidizes the purchase. This will buy equity protection by this Friday down to $235, where the risk is then reassumed. In other words, if the shares drop below $235 by Friday's close, the trader has reduced his or her hit by $6.60. Should the shares rise, the trader has paid $3.40 for nothing... except the ability to sleep at night.

Get an email alert each time I write an article for Real Money. Click the "+Follow" next to my byline to this article.
TAGS: ETFs | Investing | Markets | Options | Stocks | Trading | Software & Services