One the one hand, you have seen it a million times. Aggression that gets someone into trouble. Still, there is another hand, and on the other hand, one really has to admire when they see someone else, or in this case, a major corporation just go for it. Today just happens to be the day that Marriott International (MAR) hosts the firm's meeting for security analysts from New York. Truth be told, I am both watching and listening to this meeting while banging out this missive as well as trying to figure out how I might want to go about making some dough based on the information available. Marriott has had some issues, most notably the breach of its guest reservation data base discovered last September. That said, always love when somebody shows up for a fight.

The firm announces today that it plans to open a rough 1700 new hotels globally. By 2021, the firm expects to add between 275K and 295K new rooms, of which 214K are already under construction. These new rooms are expected by the firm to possibly contribute $400 million in fee revenue in the year 2021, and $700 million annually once stabilized. The feeling at Marriott is the 2016 acquisition of Starwood Hotels strengthens the line-up of brand names, the loyalty program, and bolsters the firm's presence in Asia. The hope here is that all of this additional scale is accretive to the firm's performance while the firm benefits significantly from synergies of cost.

The firm is looking for this aggressive three year plan to produce diluted earnings per share of $7.65 to $8.50 by the year 2021, which would be a compound growth rate of 11% to 15% above the firm's 2018 adjusted results. On top of that, the firm expects to return some dough to shareholders... a lot of dough to shareholders. Based on the growth projected based on this plan, Marriott is looking at making between $9.5 billion and $11 billion in cash available over the year 2019 through 2021 that would include close to $2 billion in dividend payments, and between $7.6 billion and $9 billion that would be spent on repurchasing the firm's shares in the secondary market.

In case you are wondering... this is the likely catalyst for the 2.5% jump in the share price on Monday morning that comes on top of the 2.2% pop on Friday.

I don't love the balance sheet. Cash on hand as the fourth quarter ended seemed light. Debt to equity seemed a bit daunting. A Current Ratio of 0.42 on top of a Quick Ratio of 0.38 should scare the stuffing out of anyone else still doing their own fundamental analysis in 2019. I can't be the last one, right? Still there is free cash flow in the billions, and even without this new plan, the analyst community has been expecting to see growth in earnings over the next two years.

The investor has to understand that he or she is being paid to stick around. Once that is understood, then I believe that a trade might be possible, but this investor must let the enthusiasm of the new plan abate prior to entry. I believe that today, an investor will overpay for an equity stake. We might be able to figure on a work around. 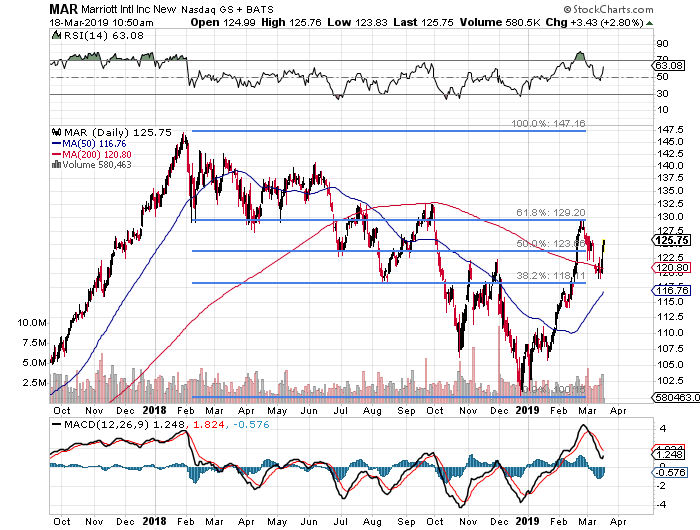 First off, we see resistance show up almost exactly where it was supposed to in late February, followed by a neat and tidy period of support in March. This chart is almost "color by numbers" perfect. You'll now notice the "cup" (October through late February) followed by a period of consolidation (Late February through mid-March) that would be a "handle".

I see this formation as bullish. By may calculation, should these shares move past the 130 levels (the right side of the cup, there will be a breakout of significance, meaning perhaps a 25 point move or so. That said, we are not there yet. I would rather buy these in the hole, close to 120, or on a move above 130. Both of those levels provide the investor with, in my opinion, an increased probability of profitability.

So... instead of taking down an equity stake right here, the idea is to...

Get an email alert each time I write an article for Real Money. Click the "+Follow" next to my byline to this article.
TAGS: Earnings | Investing | Stocks | Technical Analysis | Trading | Resorts and Hotels | Stock of the Day

Though chip stocks have coronavirus exposure in multiple respects, the bad news now looks priced in for many names.