So now the news is out. If you read me earlier or someone else as early as last night, then you know that Bob Chapek is out as CEO of The Walt Disney Company (DIS) , and former CEO Bob Iger is back in on a two year deal.

Will Iger stay forever? No, the man is 71 years of age, and tried to retire from this job several times prior to finally doing so in 2020. He is in because the firm is in disarray, the stock has been down BIG, and losses are mounting across two key businesses... Direct to Consumer and Content Sales/Licensing.

Did I mention that the employees are unhappy, the customers have been falling out of love with the company and the balance sheet kind of stinks? That's why the Board brought back a familiar face who the employees, customers and shareholders would both have some lingering fondness for. It doesn't hurt that what Disney is trying to sell to the public is massed entertainment or dreams and fantasy, and Iger has always been a creative sort who socializes with other creative sorts. Chapek, by his own admission, is not.

For those reasons, you can bet that the needle will move. One way or another. Can the firm actually do this, as in continue to evolve and still return itself to glory? It has to. Some things, like returning the balance sheet to a position of greater strength will take time and stay under the radar. Others will be noticeable and make headlines. That's when the stock will move.

Beyond those three, the one-star rated Steven Cahill of Wells Fargo rated the shares as a "buy" with a $125 target price as Laura Martin of Needham, who is not highly rated at TipRanks placed a "hold" on the shares.

In addition, MoffettNathanson, without putting a human name on the rating, upgraded DIS from "Market Perform" to "Outperform" while installing a $120 target price.

I do believe that Iger can return cash flow from operations and free cash flow to growth. If not during the current quarter than hopefully the next. Let's hope that we have heard the last of those silly "next 100 years" comments when the firm has poor numbers to report.

I believe Iger will get down to brass tacks as soon as possible. He knows he wasn't brought in to do a victory lap. The business will be more refined in terms of maximizing success at the parks in order to feed the growth of direct to consumer entertainment , while reducing expenses where there is fat to cut.

As for ESPN, and/or the future independence of that business or any tie-ins to online gambling, I can not guess. As for the purchase of the portion of Hulu (25%) that is not owned by Disney, I believe that actually happens and leads to a more focused, less chaotic streaming business. 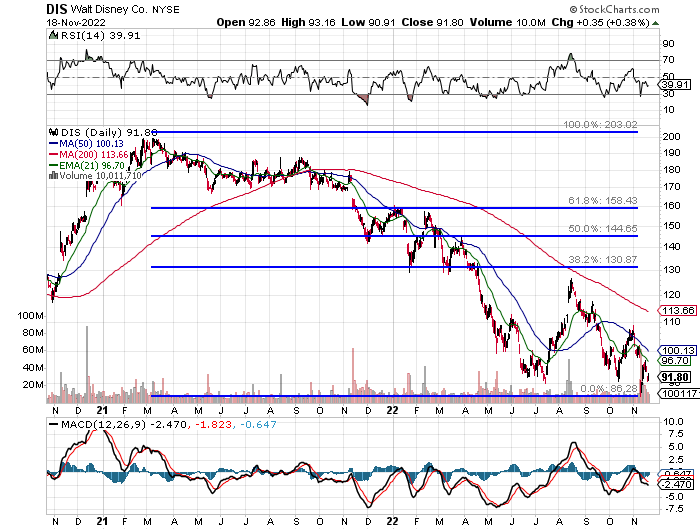 The stock from the peak in March of 2021 through Chapek's bottom earlier this month requires a run up to $131 to complete a 38.2% Fibonacci retracement of the entire move. Relative strength has obviously been weak. The daily MACD has been in a poor place. 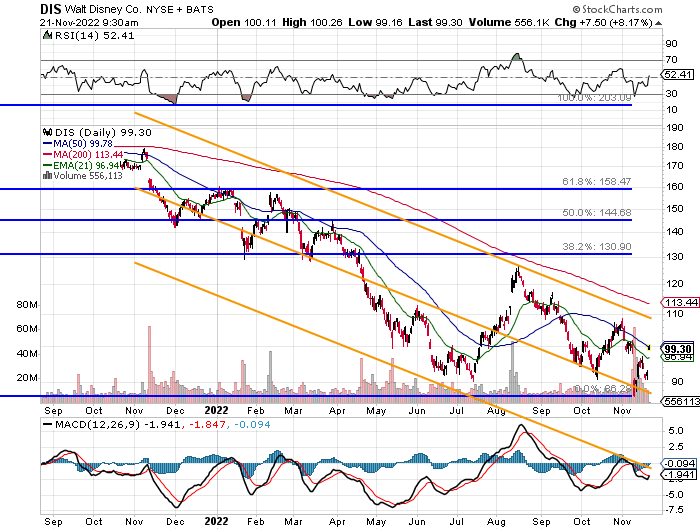 Zooming in a bit, we see that the upper trendline of our Regression model runs just below the 200 day SMA. This will provide for second level catalyst or resistance after the shares either take and hold or fail at the 50 day SMA this day. Should DIS hold the 50 day line, this will provoke an increased level of exposure across Wall Street. A failure would make investing in the name all that much harder and probably return at least some of us to trading the name rather than holding on.

Get an email alert each time I write an article for Real Money. Click the "+Follow" next to my byline to this article.
TAGS: Investing | Markets | Stocks | Technical Analysis | Trading | Movie Production | Movies | Resorts and Hotels | Sports business | Consumer Discretionary