For much of this year, I have been writing about how the business media and most market strategists have failed to recognize what has been really going on in the market. Traditional Wall Street focuses mainly on big-cap names and the S&P 500 and DJIA. There are always some inconsistencies under the surface, but this year has been extreme.

One of the major stories that most of the business media have been missing is that small-caps haven't done anything for months. They had some great gains in January and February and have been bouncing around in a trading range since then. In contrast, the S&P 500 kept chugging along all summer and didn't top out until early September. The S&P 500 chart looks quite different than the Russell 2000 ETF (IWM) chart.

Because small-caps have been basically going nowhere for months, the chart of the IWM is setting up extremely well. There is a huge foundation of support, and as we move into the fourth quarter, the conditions for a breakout to the upside are quite good. This is one of the reasons I have been feeling optimistic about the market as we go through the current corrective action. 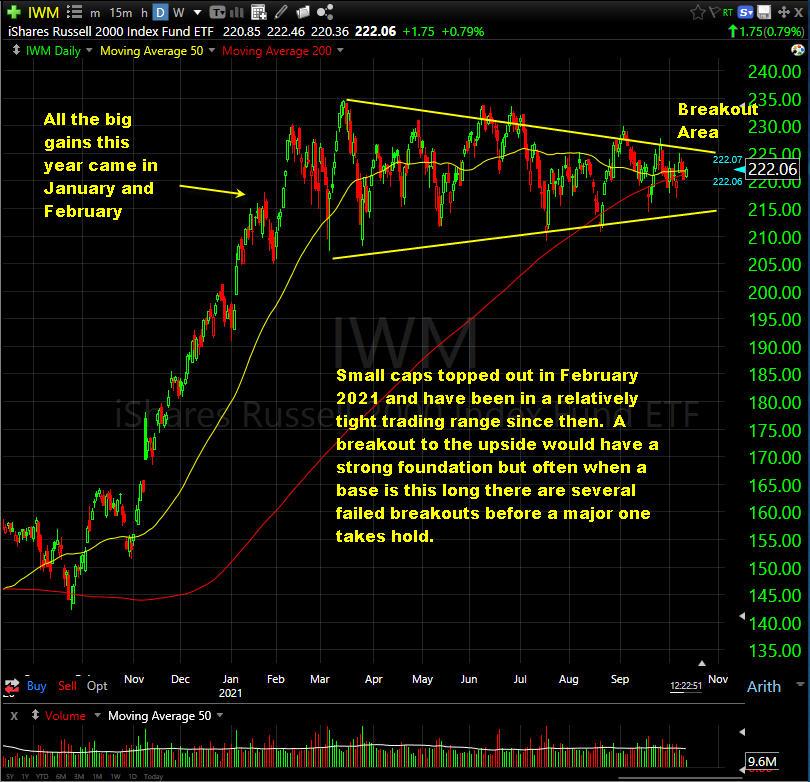 A setup like this isn't always that easy to play. There is a very high likelihood of a failed breakout attempt as many of the traders that have been waiting for so long will look to sell into the first big surge. However, this usually creates opportunities to buy on the pullbacks and retests of the breakout areas.

We will see how things develop, but I consider the IWM chart to be the most important in the entire market, and it looks quite bullish.

Get an email alert each time I write an article for Real Money. Click the "+Follow" next to my byline to this article.
TAGS: Investing | Markets | Small Cap | Stocks | Technical Analysis | Trading