By BRUCE KAMICH Sep 27, 2019 | 11:59 AM EDT
Stocks quotes in this article: UNH
UnitedHealth Group ( UNH) has been flirting with its April low. Will this be a successful retest and hopefully a buying opportunity or is there a risk of a lower low?
In this daily bar chart of UNH, below, we can see that prices have made lower highs in the past 12 months - December, February and July. Lower lows were made in late December and April so far. The $64,000 question from late March is whether a new low is made soon or if the pattern is changing?
UNH is trading below the declining 50-day moving average line and the bearish 200-day line. Trading volume shows a big surge in turnover in April into that low but a similar surge is not appearing this month. Low or lower volume at a price low can mean that the market is "sold out" and we do not have the same degree of anxiousness to "get out now".
The daily On-Balance-Volume (OBV) line has been stable since May and has not declined much from the July high. Prices appear to have fallen of their own weight.
The 12-day price momentum study in the lower panel shows higher lows from late August into late September despite prices making lower lows. This is a bullish divergence and suggests that the decline is slowing.

In this weekly bar chart of UNH, below, we see a mixed to bearish picture. Prices are below the declining 40-week moving average line. On the positive side we see that the $210 area or level has acted as support a number of times the past two years.
The weekly OBV line has been weakening from October and the MACD oscillator is in a sell mode below the zero line.

In this Point and Figure chart of UNH, below, we can see that the software is projecting a possible downside price target of $190. A rally to $238.53 would be bullish. 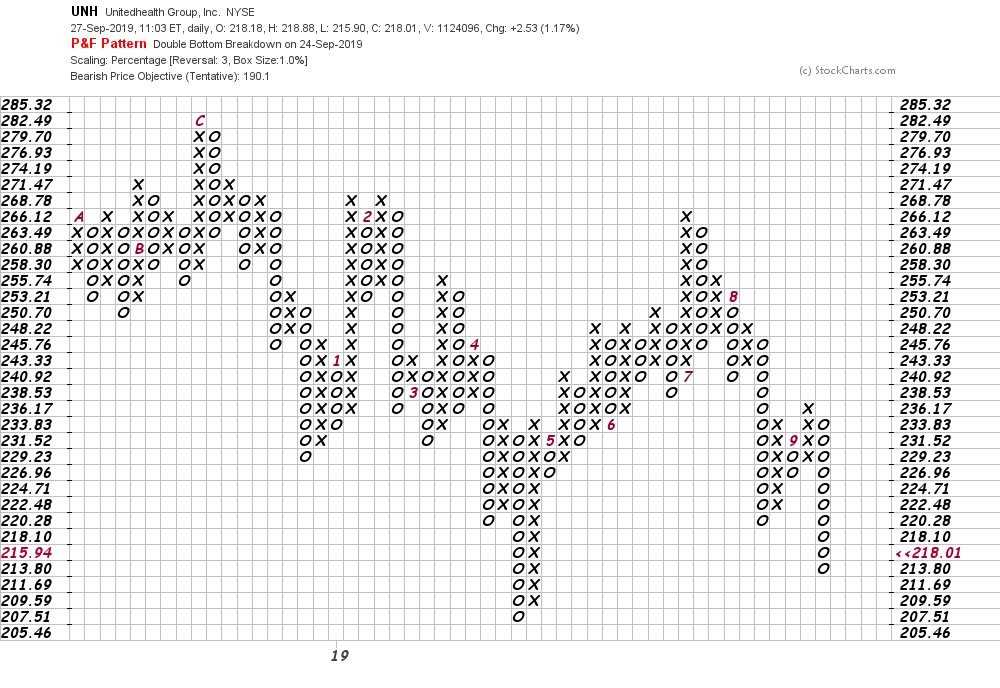 Bottom line strategy: The three charts above each tell a different story so the tricky part is which one(s) do we want to give a greater weighting in our decision. With prices extended on the downside I would be more positive now but a close at $210 makes the picture more vulnerable.

(UnitedHealth is a holding in Jim Cramer's Action Alerts PLUS member club. Want to be alerted before Jim Cramer buys or sells UNH? Learn more now.)

Get an email alert each time I write an article for Real Money. Click the "+Follow" next to my byline to this article.
TAGS: Investing | Stocks | Technical Analysis | Trading | Healthcare

Let's check the charts once again.