An interesting twist occurred in the market last week. The short-term overbought reading for Nasdaq, which is based on the advance/decline line, went from overbought to (almost) oversold. That is how crummy Nasdaq breadth was last week. Six of the last 10 trading days have seen Nasdaq breadth negative.

The same is true of net volume for Nasdaq: Six of the last 10 trading days have seen more downside than upside volume. Yet in the last 10  trading days, Nasdaq has managed to tack on 4%. Oh, sure, most of it came two weeks ago since last week Nasdaq only managed to eke out 1% (barely) for the week. But that's the weakness under the hood.

What do we do about this unusual move in the Oscillator? Well I suppose if I am going to be wrong about a pullback this week (a pullback this week is still my assumption) then perhaps we see small caps and Nasdaq in general rally, while the big caps pullback.

Let's now move to sentiment, because we already know about the Investors Intelligence bulls at 64%. We know about the four week moving average of the American Association of Individual Investors' bears being down near 20%, a reading typically seen prior to a correction. We also know that the National Association of Active Investment Managers have seen their exposure rise from 52 to almost 96.

Furthermore, if we use the equity put/call ratio we see a series of higher lows since the January low, something that has tended to happen before a pullback.

Now look at the 10-day moving average of the Index put/call ratio. Last week we looked at the 21 day moving average, which is getting low, but here we see this indicator back where it was just prior to the June high as well as the September swoon. Perhaps it won't matter, but this says folks are not spending much money on hedging with index puts. 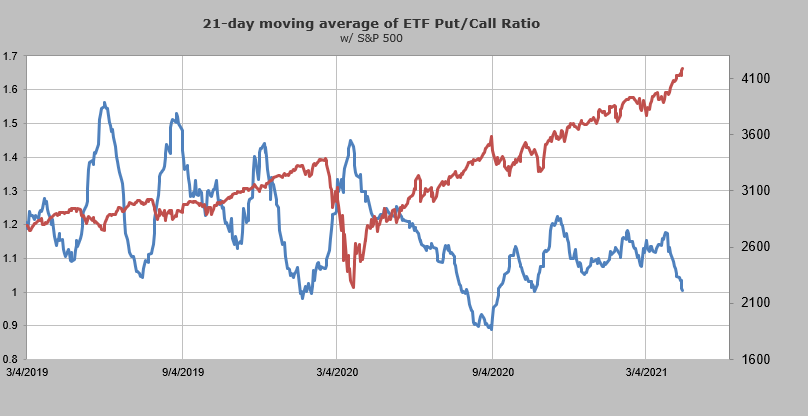 Finally there is the 21-day moving average of the Volatility Index put/call ratio. For the first time in months the put/call ratio for the VIX has been over 1.0 for three straight days. While ultimately that sort of persistence should be bullish if it stays that persistent, the last three times it has turned up from this general level are noted on the chart.

Point A is the June 2020 high. Point B is the early September high and Point C is February. 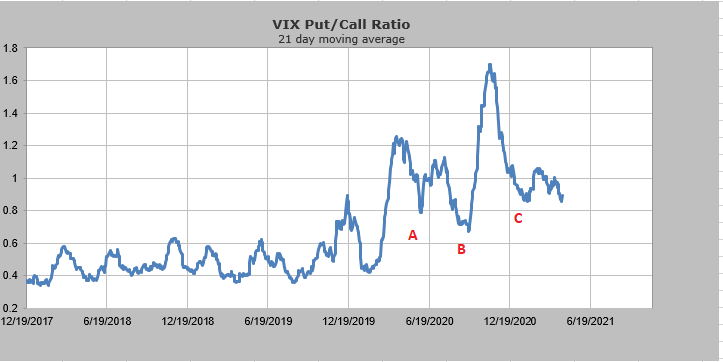 Perhaps none of these sentiment readings will matter, but it is rare that every single one of them, no matter what moving average you slap on them tells the same story: There is very little downside protection in this market.

The lows of the day are the key technical level now as that is likely to be where some stop losses will be set.

What's Your Game Plan? What Traders Need to Watch Tuesday and Wednesday

This isn't the worst time to get your buy list ready.

Can Biglari Holdings Keep It Going?

The stock is certainly looking better these days, with both share classes trading near two-year highs.