Morgan Stanley (MS) waited until all its major competitors reported before setting the bar for financial names reporting. The market has rewarded it with gains not nearly seen for almost a decade. Shares continue to trade higher by 8%, putting MS into territory not seen since January 2013. However, today's peak surpassed that January 2013 intraday peak, meaning the post-earnings move today was only outdone by the huge 12.61% move in July 2011. That's on an intraday maximum move basis, not a closing basis. That also means whether you are buying or selling today, you're doing so in uncharted waters. Historical single day or multi-day activity that requires a single data point from six or eight years ago is useless.

The company delivered solid beats on the top and bottom lines. Earnings per share of $1.20 on $10.9 billion in revenue easily surpassed estimates of $0.99 EPS on $9.72 billion in revenue. The company has focused on keeping costs under control while diversifying its revenue base. Even as M&A advisor revenue declined, the company grew bond trading, underwriting, and investment management. Total revenue grew 27% year-over-year while its wealth management business has now tripled in only five years.

Shares have pushed above the highs from the first quarter of 2018 (also all-time highs). Since those highs were hit, the stock lost nearly half its value into late 2018 before gaining some traction in 2019. Now, we have an extension on price as well as trend and momentum that are stretched to their theoretical limits. If we were to trace back deeper into its history, we'd find that MS can extend higher from here although it required a period of consolidation in the past. Traders will likely want to key on the $54 to $57 range as a possible point of consolidation. I see it playing out in that range, or, if the market remains strong, it may happen in a tight range above today's close and form over the next few weeks. Unfortunately, those going in long or short here will act as guinea pigs. 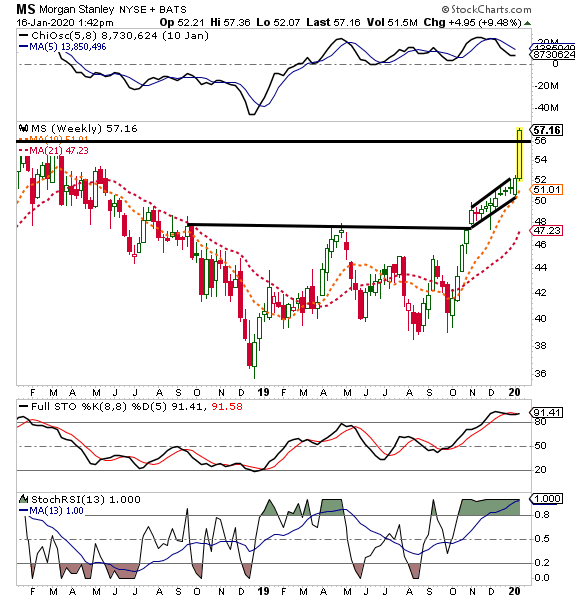 MS continues a trend of a Riptide market. There's something unseen, dangerous underneath stocks pulling them swiftly and strongly in a single direction. That bullish tide has carried shorts fighting it far out to sea into deeper waters. If you can't get behind the trend, and I understand why many are hesitant, then taking a more neutral approach appears best. Remain neutral until the tide weakens or you can find a path back to shore. Until then, the trend is simply too strong for bears to fight.

Get an email alert each time I write an article for Real Money. Click the "+Follow" next to my byline to this article.
TAGS: Earnings | Investing | Markets | Stocks | Technical Analysis | Trading | Banking | Financial Services | Stock of the Day