On Wednesday afternoon, The Walt Disney Company (DIS) released the firm's fiscal third quarter financial results. The magic is back. For the three month period ended July 2nd, Disney posted adjusted EPS of $1.09 (GAAP EPS: $0.77) on revenue of $21.5B. These top and bottom line results both comfortably beat Wall Street's expectations, while the revenue print was good for year over year growth of 26.3%.

Disney+ ended the quarter with 152.1M subscribers, which was up 14.4M subs from three months ago and easily beat expectations. Hulu ended the period with 46.2M subscribers, and ESPN+ ended the quarter with 22.8M subs. In all, at quarter's end, Disney had 221.1M subscribers across the three streaming services that make up the Disney Bundle. This is more subscriptions than perceived streaming entertainment leader Netflix (NFLX) reported last quarter. That number was 220.7M.

The firm adjusted longer-term global subscriptions guidance moderately lower to accommodate for not proceeding with digital rights to the Indian Premier League (cricket). Disney will separate core Disney+ subscribers from Disney+ Hotstar subscribers for business unit reporting purposes. The firm now sees by the end of fiscal 2024, core Disney+ subscriptions at 135M to $165M, and Disney+ Hotstar subscriptions of up to 80M. This compared to previous guidance of 230M to 260M.

The domestic parks, resorts and cruise ships were open and operating for the entire quarter. Occupancy at the domestic hotels was greater than 90%, while the average park goer spent 10% more than the one year ago comp, and 40% more than 2019 (pre-pandemic).

Shanghai Disney was only open for three days in this reporting period, which certainly suppressed international performance that was partially offset by Disneyland Paris that was open for the entire three months compared to only 19 days for the year ago comparison.

Disney ended the quarter with a net cash position of $12.959B, which is down over the past nine months, and inventories of $1.59B, which was slightly higher over that time. This brings current assets down to $31.422B. Current liabilities were also down small to $30.704B, including $5.58B worth of borrowings labeled as current. This brings the firm's current ratio to 1.02, which passes muster, just barely. Disney can pay Disney's bill. I am going to whistle past the quick ratio of 0.97 for now, given what this firm has been through and how its condition appears to be improving.

Total liabilities less equity comes to $107.641B including total borrowing of $46.022B. This is obviously not one of the better balance sheets that I have taken a look at. I'd like to see the firm work on debt reduction once out of the pandemic woods. I understand that much has had to be spent on investment. That is a good reason for not returning cash to shareholders and they should not until comfortable enough to allow free cash flow to return to former levels.

I have been able to find eight sell-side analysts who both have opined on Disney since these earnings were released and are rated at a minimum of four stars (out of five) by TipRanks. Of these eight, after changes have been made, seven rate DIS as either a "buy" or their firm's buy equivalent. There is one "hold." That was Laura Martin over at Needham, who declined to set a target price. Of the other seven, the average target is $149.43, with a high of $160 (Philip Cusick of JP Morgan) and a low of $140.. twice (Barton Crockett of Rosenblatt Securities and Brett Feldman of Goldman Sachs).

I do like to see the comeback in progress in Disney. Now, I have some explaining to do. As readers/listeners/viewers who do follow know, Disney has been a core part of my long equity positioning off of those mid-June lows, once we had confirmation (June 24th) that a tradable bottom had probably been set for the S&P 500 and Nasdaq Composite.

I had built a fairly sizable position into July with an average entry price of $91.78. I had not added of late, as the stock was well into the move. This may surprise some readers, but I took some profits ahead of the Thursday regular session close above $112, and some more profits ahead of the ARCA close last above $120. I have left half of the position in place, and at the last sale, I am up 33% so far.

Why did I sell some DIS ahead of the close? I had money on the table and a news event that I knew would risk my profitable trade staring me in the face. This is risk management. I protect myself and my family. Why did I sell more overnight? Simple. Because my initial target price had been breached and that's how discipline works. 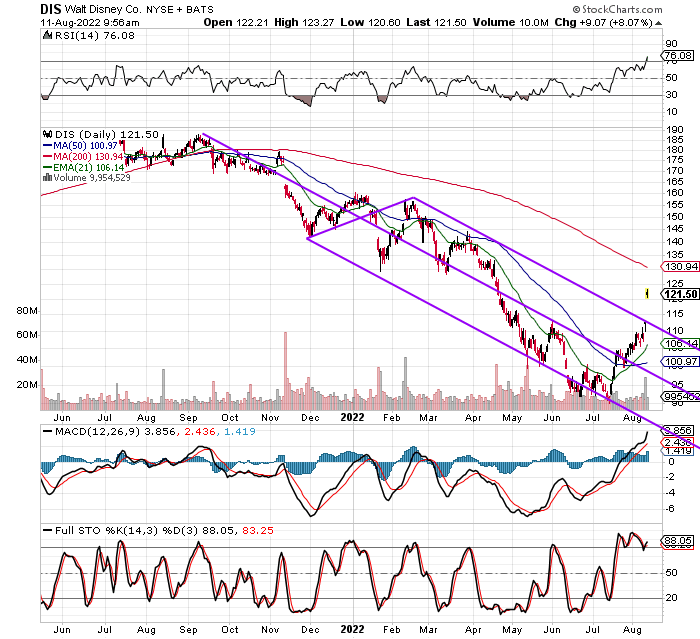 Would I buy some here? No, I just sold some here. Readers will see that DIS has broken out of my downward sloping Pitchfork model with an act of charting violence. Relative Strength, the Full Stochastics Oscillator, and the daily MACD are all standing together and screaming "overbought" out to anyone who will listen. Nobody is.

The current pivot is the 200 day SMA ($131). Should DIS take that level, the new target price will be $158. I do believe that the stock will get there. However, like I just said, the name is now technically overbought and trades at about 29 times forward looking earnings.

Once the algos stop forcing markets higher in response to all of the July data on inflation, I think that this stock will give buyers a chance. I will add the shares that I sold last night back onto my long position. I'd like to do it in part as the shares try to fill this morning's gap up opening. I'd like to do it some more as the 50 day SMA is forced to chase the shares. Once tested, that's where I would like to add not the shares that I have already sold, but new shares. That line will be underlying support.

Get an email alert each time I write an article for Real Money. Click the "+Follow" next to my byline to this article.
TAGS: Investing | Earnings | Markets | Stocks | Technical Analysis | Trading | Digital Entertainment | Movie Production | Movies | Resorts and Hotels