I like to watch the number of stocks making new lows. New highs, too.

But, lately, it's the new lows that have been expanding, and I like to know where the expansion is coming from, as in which groups. So, I read the list. I suggest you do, as well.

You might recall almost one year ago Nasdaq's new highs were expanding exponentially, and I did a similar exercise. I discovered at the time that there were so many special purpose acquisition companies that were triple-counted, because there were the original acquisition corporations, then there were Class A or B or sometimes both, and then there were the warrants. The same "stock" had three or more vehicles to play it. And they were all being counted as new highs.

Then the SPACs died and we went through a period last summer where the new lows on Nasdaq expanded greatly and the list was filled with SPACs. I thought of this as I read the new low list this week, since the expansion, not just for Nasdaq, but the New York Stock Exchange is something to behold. As I noted Wednesday, the 10-day moving average of stocks making new lows is on the rise again. Even the NYSE has seen an expansion. 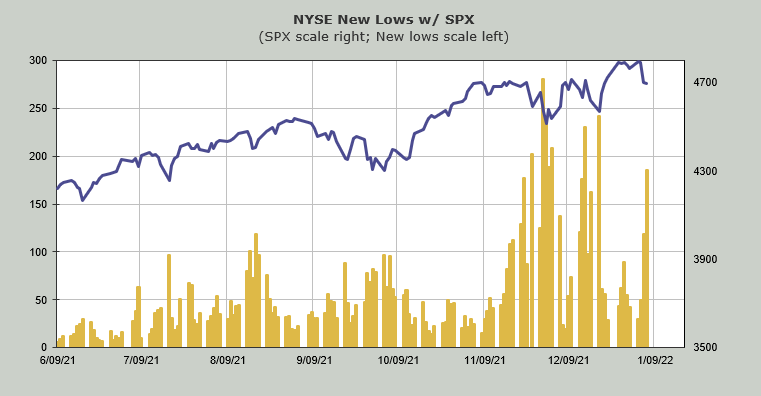 Here's what I discovered. The NYSE has a lot of SPACs, so there is the double or triple counting aspect to consider. But the NYSE also has a lot of bond-related names on that list. Then, I moved to the Nasdaq and there were only a handful of SPACs, so that list that now numbers just over 600 new lows for Nasdaq doesn't have much that is triple counted but, rather it is littered with biotech names.

It is also filled with bond-related exchange-traded funds. For example, I counted ten iShares bond ETFs on the list and nine from Vanguard. And all those ETFs from what was so hot a year ago are on the list. Global X had 12 and you can imagine what was on the list: blockchain, cannabis, cloud, financial technology, hydrogen, solar.

So, as much as we'd like to be able to rationalize that there are so many stocks on the new low list we really can't. This market is now, in many ways, the inverse of what we saw last year. Nasdaq has been down seven of the last eight days. The S&P is at five of the last six. Yet in the last 10 trading days, breadth has been negative exactly two times.

That's the value vs. growth story that everyone is talking about. And just like everyone has noted, it's all about the bonds/interest rates. If interest rates stop here (around 1.70 on the 10 year) many of those new lows will dry up. If rates keep climbing, I expect that new low list to add more bond funds to it.

I do not have a strong view on bonds right here. Despite everyone seemingly looking for higher rates, the Daily Sentiment Index (DSI) for bonds is at 42, which is dead neutral. Perhaps the jobs number released Friday morning will move rates higher and therefore move sentiment, but I cannot see sentiment getting to an extreme anytime soon.