Amazon.com (AMZN) is one of the most recognizable companies in the world. The stock price has been in a "never ending" uptrend since 2001 (on a log chart) but the price action since August is suggesting a pause in this long-running advance.

I know it is close to sacrilegious to suggest that AMZN could decline but let's have the charts speak for themselves.

In this daily bar chart of AMZN, below, we can see that prices have trended sideways around $3200 or so since July. The highs have declined since early September and the lows have risen since late September. Prices have narrowed down to an apex so we need to watch closer for a breakout.
The slope of the 50-day moving average is neutral and prices have crossed this indicator many times in the past three months. The 200-day moving average is rising and intersects down around the $2750 area.
The On-Balance-Volume (OBV) line shows some weakness from early September suggesting that sellers have been more aggressive.
The Moving Average Convergence Divergence (MACD) oscillator has been moving around the zero line for a few months and is currently below it.

In this weekly Japanese candlestick chart of AMZN, below, we see some clues that should worry the bulls. Prices are still above the rising 40-week moving average line but we can see some large upper shadows above $3400.
The weekly OBV line shows a decline from the middle of August, and the 12-week price momentum study shows a dramatic change in October and November as upside momentum evaporated.

In this daily Point and Figure chart of AMZN, below, we can see that the software is projecting an upside price target at this juncture in time. I want you to draw an imaginary horizontal line across $3138 which by my eye is the midpoint of this triangle pattern.
My "read" of the chart tells me that there is more price action above this line than below. More X's and O's above the line suggests more rally failures than dips that have been bought. This is what distribution (selling) should look like. 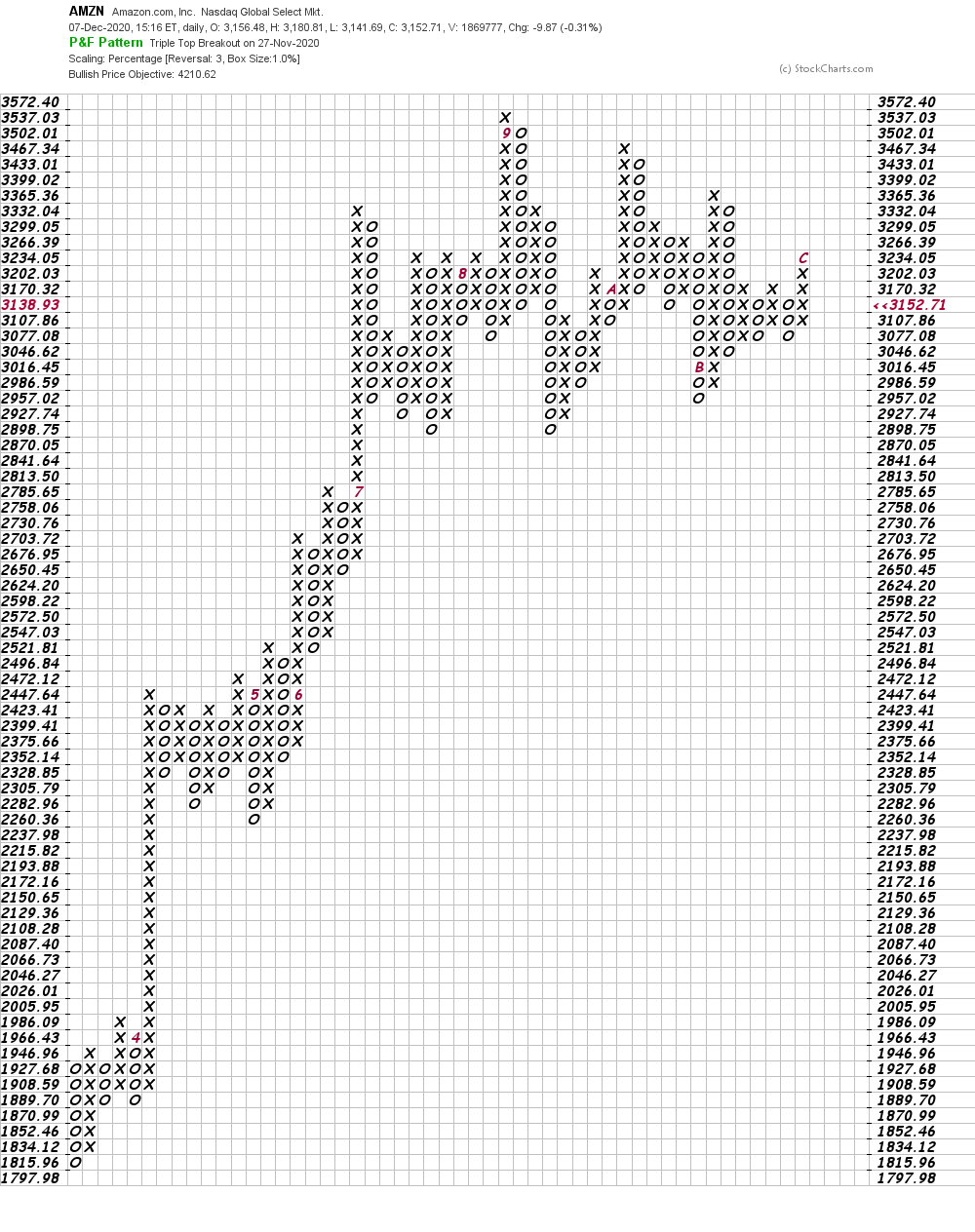 Bottom line strategy: I have no clue nor idea what fundamental development might produce a decline in AMZN, but the indicators and price movement suggests that the path of least resistance on AMZN could be lower.
Get an email alert each time I write an article for Real Money. Click the "+Follow" next to my byline to this article.
TAGS: Investing | Markets | Stocks | Technical Analysis | Trading | Retail | E-Commerce

The Markets Are Steadily Climbing

I'm hoping that we see some more rotational action rather than a broad market correction.

JP Morgan Had Another Outstanding Quarter, Here Is How I'm Playing It

Should you take profits or buy here? This is my thinking on the stellar banking name.