Federal Reserve Chair Jerome Powell caught a bit of negative response in the wake of Wednesday's FOMC policy meeting. If you read me often, then you already know that I am not likely to be mistaken for a fan of the central bank. If you've read me for a while, then you know that my thinking on monetary policy is probably more in line with the likes of Ludwig Von Mises than it would be with the popularized version of economic theory often referred to as "New Keynesian."

The ugly truth is just that.. it's ugly. The FOMC seems to have come around, if that is, you believe as I do that the pace of monetary policy normalization had been a bit too aggressive relative to several factors. What factors, you ask? First and foremost, relative to human response. Human response is simply by far the most significant output, as well as at the same time being the least predictable result of all inputs. Understand? This one factor is the main reason that to understand economics as science is to misunderstand economics completely.

Implementation of policy, in order to be correctly interpreted, must at all times be understood as art. You and I both stand before a painting in a museum. You see a masterpiece. I see a crudely painted basket of fruit. Human response. You might pay some nice dough for a reprint. I simply became hungry. Predicating these outcomes would be a cinch if all inputs were controlled in a laboratory, which is what New Keynesians try to do. Can't happen. At least not effectively.

The One In Response To The Many

"Market based measures of inflation compensation have moved lower in recent months." Of course they have. Economic weakness across Europe, Asia, and emerging markets, coupled with that already mentioned pace of tightening in the U.S. had forced dollar valuations to a point that called for relief. Higher interest rates, and the removal of affluent Chinese investors from the real estate market have caused a significant reduction in what is known as "The Public Wealth Effect". Equity market volatility exacerbated this "human response" which has been demonstrated through the retail industry slowdown visible from the local mall all the way to new automobile dealerships.

Overall, the economy has remained relatively strong you say? Had it dawned on anyone that factors such as the trade war between the U.S. and China, Brexit, and what was and still is a U.S. budgetary showdown had led to the pulling forward of on some levels... of not just basic consumption, but manufacturing, inventory building, or even demand for labor. Please understand that human response occurs at every level. Hopefully most readers have noticed the removal of "risks to the economy are roughly balanced" from Wednesday's statement. That's because the committee is not sure that they currently understand the risks. I am fine with that admission. Better to understand that they do not.

Many see the Fed as done for the year. Never assume. Read the words as they are written. The committee will be patient. Does anyone else not see this as prudent in a world where virtually no other central bank will anytime soon be able to normalize without suffering oversized political impact? How strong should the dollar be? Fiscal policy is another train wreck waiting to happen. Stay cool as cooler heads will always prevail.

In Wednesday's column, I implored the committee to at least display in some way... some flexibility in balance sheet management. Though we do not have a plan for this management before us at this time, future adaptability has been clearly signaled. There has been debate on the program's impact upon the point of sale in terms of liquidity. Please understand this. By virtue of the fact that there had been any debate on this issue at all, the perception had become reality. Simple human response. Publication of intended future size of the central bank's balance sheet will reduce uncertainty, allowing the Fed to better interpret impacts felt across the broader economy in a more responsible way as conditions move toward normalization.

Shifting the average maturity of the Fed's debt portfolio toward the short end would be the next obvious step here (note to Jerome), as this would at least begin the arduous task of repairing the yield curve. Reversing the grotesque impact of Operation Twist needs to begin immediately. This is key, far more so then would be peeling back the "pile on" effects of QE3.

I think it paramount to recognize that through perverse monetary policies put in place long ago, and exacerbated in the wake of the great recession that price discovery has been to some extent artificial for far longer than we care to admit. Some who only moved economics further and further from the truth publicly pat themselves on the back. They may even, at times, refer to themselves as courageous. There is no denying that they left the current FOMC in an awful spot, where everything from risk assets to debt securities has now been priced in a manipulated environment. I do not think that Jerome Powell has given up on normalization. I do not think that he has thrown in any towel. I think we still know that his intent and our intent are likely aligned. Perhaps our lead central banker has simply learned finesse.

Far better to use a scalpel than a sledgehammer when creating fine art. In particular when this artwork will result in broad human response, even among those who do not see it as such.

High level talks between the U.S. and Chinese delegations begin in Washington on Thursday, as the two nations are now roughly two-thirds of the way through their self-imposed 90 day truce. The China Federation of Logistics and Purchasing released that nation's PMI survey on Thursday morning that showed aggregate manufacturing activity to be in outright decline for a second consecutive month. Does this further pressure the Chinese into making concessions beyond balancing net headline trade data in dollar terms? Does the not just U.S., but apparently global, rejection of Huawei aid or hurt the potential for an improved outcome in DC?

At some point on Thursday, there will be headlines, and algorithms will react. This event will obviously carry the weight on enhancing the Fed inspired Wednesday rally, or force a rewind ahead of Friday's employment data. Out of the woods? Not even close.

As some of our trades have worked out extremely well of late, it's easy to forget that being a a trader in a rising market is well... just plain easy. That said, one of my favored stocks went the wrong way after the close, and to be honest... I think it presents more as opportunity than as warning. Let's get down to the nitty gritty.

Microsoft (MSFT) reported their fiscal Q2 results after Wednesday's final bell. EPS beat by a penny, while revenue fell a bit short despite increasing by 12.4% year over year. What gives? Well, I'll try to be brief, but there are two impacts here that I believe are either easily correctable, or more precisely... potentially self-correcting. We all know that the cloud is the immediate future of business, and that the planet is still behind the U.S. on broad cloud business integrations. Azure, Microsoft's hybrid cloud solution (the reason for being in this stock), saw it's growth trajectory slow. Slow to 76% in a quarter where businesses obviously drew back from capital spending. Forgive my arrogance, but I am not all that worried about Azure, and I am willing to accept the consequences should I be wrong about this.

I saw two negative impacts here that I expect to improve. One... Windows based revenue declined by 5%. Why is that? Not likely because PCs could not be sold, but more likely due to the semiconductor industry's focus on other types of higher-end chips constrained supply. This hopefully results in some pent up demand. Intel (INTC) , in their earnings call flat out told us last week that this shortage should be rectified by the end of Q2 2019. Then last night, Microsoft in their call... stated that currency exchange rates if left untouched could negatively impact revenue generation by up to 2%. Uhm... you did see what the FOMC did on Wednesday? If not, return to the top of the page. 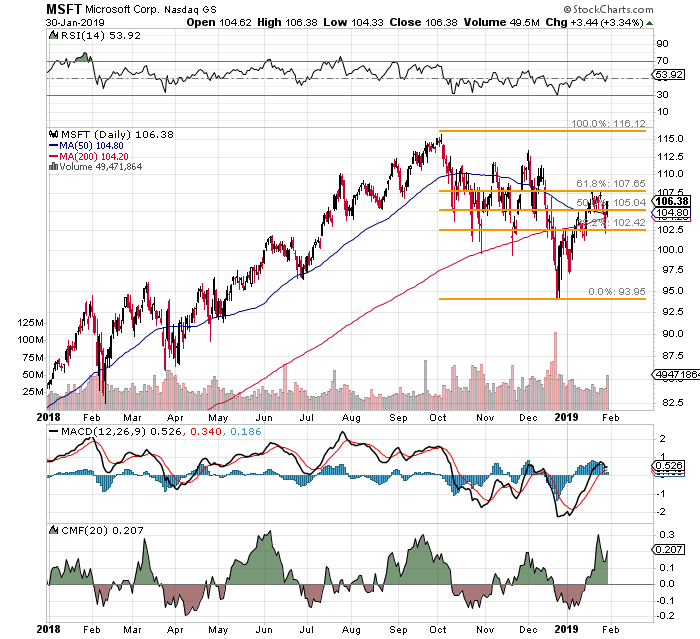 Witness the twice tested resistance at a perfect 61.8% retracement of the Q4 2018 selloff. Now witness the 50 day SMA standing as of Wednesday's close only 60 cents above the 50 day SMA. With the opening auction expected to create a last sale below $104.50 on Thursday morning, there stands a good chance that chart watchers will see a death cross, or something very close to one for this name.

My friends... I believe that by allowing the algorithmic response to that death cross to engage prior to reacting ourselves that we can beat the machines. So, let's take those creeps to school, or at least try. Trust me, nothing feels better than knowing you have beaten the algo traders with them being nowhere near cognizant of the fact because they're laughing at YouTube videos while we work. Victory to those who dare to fight.

Get an email alert each time I write an article for Real Money. Click the "+Follow" next to my byline to this article.
TAGS: Earnings | Federal Reserve | Investing | Markets | Options | Stocks | Technical Analysis | Trading | Software & Services | China | Market Recon