Beyond some analyst upgrades, there hasn't been much company news driving Apple's (AAPL) stock this month. Still, that hasn't stopped the big red fruit from adding 9% to its price for the month, bringing its year-to-date gain close to 84%. Given the $1.3 billion market cap, the growth of the company's valuation in 2019 is almost unfathomable.

The company finally unveiled its long awaited Apple TV+, although I don't know anyone actively watching it nor see little discussion of its content but it's there. "The Mandalorian" may have stolen the early thunder of the new streaming services, so 2020 will be intriguing to see if Apple's content attracts not only viewers, but social media discussions in the realm of the "Game of Thrones", "Stranger Things", or "The Mandalorian".

The iPhone will continue being the iPhone with hopes 5G will invigorate growth in 2020 and 2021 with a new upgrade cycle. I'd be eyeing late 2020 at the earliest, but build 2021 as a realistic expectation to see any real benefit from 5G. Instead, it will be Services and IoT propping up the growth portion of the company. Gaming may come into play, but I see that with a similar slow uptake, possibly slower, than TV+.

Calling the top on this stock has been a fool's errand. That being said, it is showing signs of exhaustion on both the daily and weekly chart, however, exhaustion is not the same as a top. Exhaustion may mean a reversal, but more often it indicates a stock needs to consolidate a move before it finds its next move. 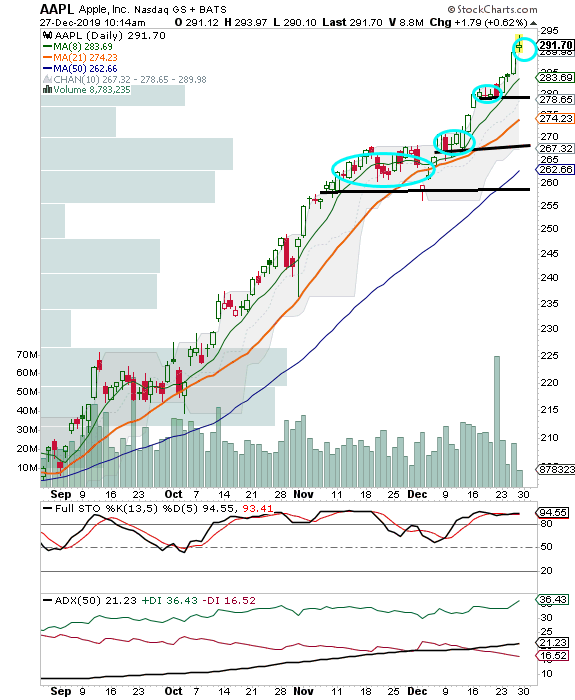 If we turn our attention to the daily chart, we'll see a repeated pattern from the past two months. The stock moves sideways for days upon end before spiking quickly higher. After a two to three day move higher, we see another period of sideways action. That quick spike higher is what we've experienced over the past few days, so it stands to reason Apple should consolidate for the last few trading days of 2019. The expected range is $287 to $293. 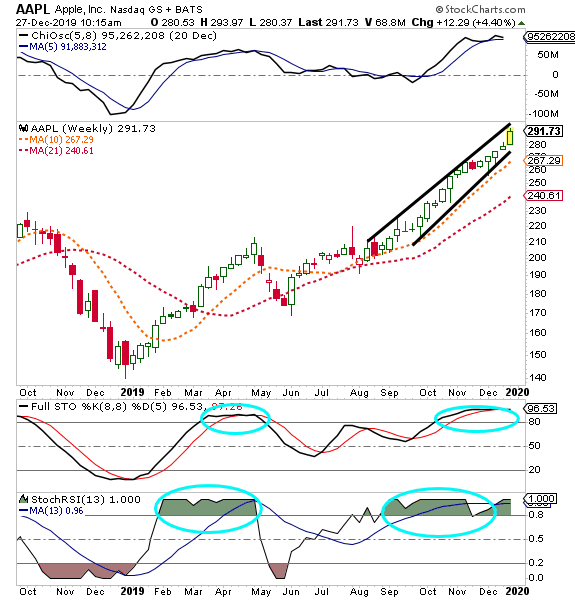 The weekly chart demonstrates Apple's strength since late summer. Shares have marched higher from $200 with barely a pause. We have a strong bullish channel with clear support and resistance, so why concerns of exhaustion? The Full Stochastics and StochRSI are running oversold for a length of time now greater than the beginning of the year. When those failed, we experienced the only real pullback for the year. For the first time since May, we have the %K ticking under %D while in overbought territory. It's not a red flag, but it does indicate shares are extended. That translates to a risk-reward that carries as much risk as it does reward. In short, that's not when you want to purchase an overextended name.

In summary, I don't envision Apple shares plummeting back to Earth, but the risk-reward now sits at a point of equality. I want to buy reward that outweighs risk in some capacity (reward greater than risk or high probability of reward even if the reward is low). Apple doesn't fit that mold, so until I see some consolidation of the latest push higher, I'll lock in profits or implement a tight trailing stop.

Get an email alert each time I write an article for Real Money. Click the "+Follow" next to my byline to this article.
TAGS: Investing | Markets | Options | Stocks | Technical Analysis | Trading | Software & Services | Technology Hardware & Equipment | Stock of the Day