"Although our intellect always longs for clarity and certainty, our nature often finds uncertainty fascinating."

One foot in front of the other. That's how we'll move. Or at least that's how we think we'll move. What might feel like a little clarity concerning the forward looking trajectory of monetary policy, in truth while doing just that, will also open the Pandora's Box of unknowable outcomes as economists, investors, employers, and consumers all - whether they know it or not - will now put their two cents in, casting votes on future outcomes with their own response or lack thereof to a seemingly mild but perhaps rapidly changing environment for short to medium term activity.

Leading into this high profile event, it would have been nice to have a firmer grip on just where fiscal policy was headed. That was not to be, as Democratic party leadership across both chambers of our legislature appears unable to get out of their own way. Now, does the apparent electoral embrace of more moderate politics in such a key and pivotal state as Virginia and maybe even in thought to be solidly blue New Jersey weaken the political will of the left to push forward with the Biden agenda?

That great unknowable forces the U.S. Treasury to lay out their own plan to taper future longer dated Treasury securities on Wednesday (today) prior to the expected tapering of asset purchases expected in the FOMC policy statement this afternoon. Understand that this almost forces the Fed to be more aggressive than they might have otherwise been, just to keep markets for two year notes through 30 year bonds somewhat balanced.

Sure, equity markets continued to trend higher on Tuesday. All-time closing records for all of the major indices. That said, the action really was quite mixed for the session, disguised by slightly green closing prices for nearly every index that we focus on, save the small-cap S&P 600. There has been appetite for U.S. Treasury securities going into the Fed's policy announcement, but breadth across equity markets took a rather sloppy turn on Tuesday.

While the Nasdaq Composite posted a seventh consecutive "up" day, and while the Composite and S&P 500 both posted a thirteenth "up" day in the last 15 sessions on Tuesday, losers beat winners by almost 300 issues at the NYSE, while winners beat losers by just 69 issues at the Nasdaq Market Site. Aggregate trading volume moved sideways for NYSE listed names as declining volume comprised 58.7% of the whole. Aggregate trading volume for Nasdaq listed names contracted somewhat, though remained elevated relative to recent semi-recent performance. Advancing volume comprised 55.2% of the whole for that equity market subset.

Though no sector type really dominated the session on Tuesday, with cyclicals, growthy, and defensive types scattered about the daily performance tables, it was the Dow Transports that stole the show, sort of. The Dow Transports closed out Tuesday's regular session with a 6.88% (1,096 points) upward move, despite the fact that only seven of the 20 stocks in that "price weighted" index shaded green for the session. In what can only be described as yet another failure for electronic, algorithmically controlled markets, Avis Budget Group (CAR) closed up 108% at $357.17 after trading as high as $545.11 and as low as $173 during normal trading hours.

Apparently adding electric cars to the Avis Budget fleet was mentioned in the Monday night call after the firm had posted a monster quarterly earnings beat. This caused an epic short squeeze and the algos were off to do what it is that they do best, force overshoot. Not only is this another black mark on the continuance of allowing algorithms that lack anything resembling situational awareness or common sense (Wow... they sure are fast. Most fund holders and pensioners probably prefer speed over quality in execution, correct?) to control the point of sale, it also puts on full display just how silly price weighted indices can be.

An announcement of moving on the reduction of the Fed's balance sheet expansion program is almost certain this afternoon, and that expectation is certainly priced into financial markets at this point. What Fed-watchers, economists and investors must understand is that the Fed is moving in order to create flexibility in potential policy adjustment as soon as possible. I think most voting members of the FOMC, while acknowledging consumer level inflation as both more elevated and a bit faster than what had been anticipated, still see the forces triggering this inflation as "transitory", and therefore they will likely make plain the intent that there is a separation between removing excess accommodation and actually tightening monetary conditions.

The statement will again stress the committee's vigilance in taking into account the health of labor markets, public health, and inflation all at once. Despite the expectation that a clear distinction will be made between removing this no longer necessary capital creation, federal budget funding, and an actual liftoff for short-term interest rate targets, futures markets trading in Chicago are actually pricing in some aggression on the FOMC's part in getting there from here.

Those futures markets are fully pricing in a 0.25% increase made to the Fed Funds Rate by the June 15th, 2022 policy meeting, and a second increase of another 0.25% by the December 14th, 2022 policy meeting. Interestingly, these same futures markets are also pricing in a 39% probability of something more than a 0.50% increase by year's end 2022. Bear in mind that the FOMC, at least in theory, turns more hawkish in complexion in 2022. Out goes Richmond, Atlanta, San Francisco and Chicago.... Boskin, Daly, and Evans are all perceived as historically dovish. Incoming will be Cleveland, Boston, St. Louis, and Kansas City. Mester and George have historically been hawkish. Bullard has been traditionally pragmatic, and we have no idea yet who will be casting votes on behalf of Boston.

To top it all off, we don't even know yet if Jerome Powell will chair the central bank in 2022.

Bed Bath & Beyond (BBBY) closed on Tuesday at $16.75, up 9.6% for the session. That was nothing. I see BBBY, as the wee hours pass, trading above $26 (+56%) after having traded above $29 earlier. The story? Bed Bath & Beyond now expects to complete its $1 billion three year share repurchase plan two years ahead of schedule, by the end of the firm's fiscal 2021. Note that Bed Bath and Beyond reported its fiscal second quarter results on September 30th. The period covered ran through August. The firm is not expected to report it's fiscal third quarter until early January.

The story is this. The firm headed by President and CEO Mark Tritton has already repurchased $600 million worth of common stock since the end of its fiscal 2020, and will complete the already authorized purchases by the end of fiscal 2021. Just one question. The firm has apparently been buying stock hand over fist for these past six months. The stock peaked at $44.51 in early June, and had recently been trading with a $13 or $14 handle until Wall Street started to sniff out this news. In a strong market for equities, mind you.

Just who else was buying BBBY? More importantly, who was doing all that selling that forced the firm to step to the plate so aggressively and at such an accelerated pace? This news does not increase my interest in the name.

Sarge name Devon Energy (DVN) reported the firm's third quarter financial results on Tuesday evening. The firm posted adjusted EPS of $1.08, and GAAP EPS of $1.24. The firm generated $3.47 billion in revenue for the period. All three numbers beat Wall Street by a country mile. The adjusted EPS number compares to a loss of  $-0.07 per share for the year ago period, while the revenue number amounts to annual growth of 224.3%.

Free cash flow accelerated to $1.1B, up 800% from Q4 2020. Looking at the balance sheet, total assets have more than doubled over the past nine months to $21B+ on sizable pops in accounts receivable, as well as the value provided by all property and equipment. Total assets now dwarf total liabilities less equity. There has however been an increase in both long-term debt and lease liabilities.

CEO Rick Muncrief made clear that the firm's top priority will be free cash flow generation in order to fund its fixed-plus-variable dividend. The firm states that after the fixed dividend ($0.11 per quarter yielding 1.05%) is funded that up to 50% of the remaining free cash flow will be distributed to shareholders through a variable dividend.

The firm apparently feels no urgent need to expand production however. Q3 production soared 87% to 608K barrels (boe) per day, but Devon expects to maintain FY 2022 production at 570K to 600K boe/day, with between $1.9 billion and $2.2 billion expected to be spent on upstream operations. 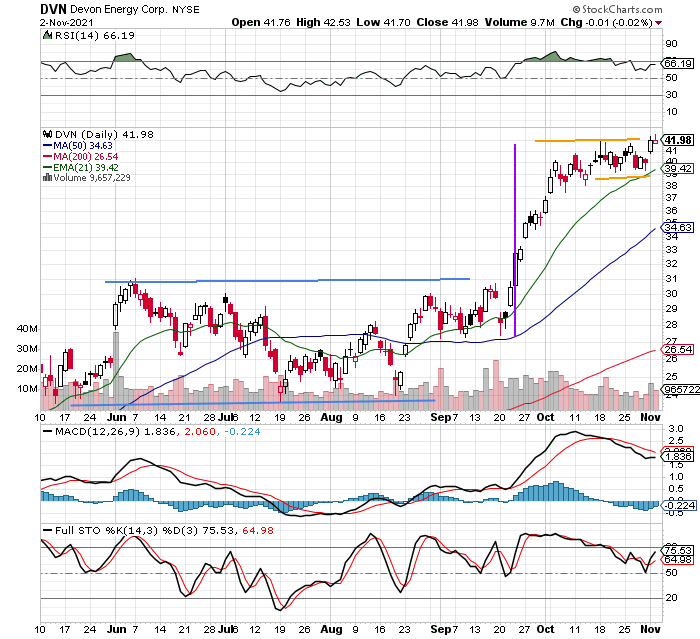 Readers will note the base (blue) that produced the breakout that we now see as a flagpole (purple). The flagpole in turn has produced a "Tight Bull Flag" pattern (orange), which unlike a typical flag which might slope downward, moves sideways instead... in a - wait for it - very tight range. I see that as a pattern of continuance, and given that the trend has been higher, is bullish.

I also want readers to see the reduction in trading volume during the flag development period relative to the higher trading volume during the spike. That coupled with the fact that the flag does not slope downward tells me that while price discovery went through a month-long period of consolidation, not very many investors were very interested in taking profits. Rock on.

Get an email alert each time I write an article for Real Money. Click the "+Follow" next to my byline to this article.
TAGS: Earnings | Economy | Federal Reserve | Interest Rates | Investing | Markets | Stocks | Technical Analysis | Trading | Treasury Bonds | Energy