No question. The quarter was a blowout. Awesome. It gets complicated beyond this past quarter's performance. We'll get into that. First, let's admire the digits. For the second quarter, Facebook (FB) reported EPS of $3.61, well above expectations. Revenue generated for the period landed at $29.07 billion, beating Wall Street by more than a cool billion. The numbers represent earnings growth of 101% on revenue growth of 55.5%, a third consecutive quarter of accelerating earnings growth on a fourth consecutive quarter of accelerating revenue growth. Simply gorgeous.

Advertising revenue was hot, printing at $28.58 billion, up 56% year over year, and better than expected. Drivers for ad sales came from the realms of e-commerce, retail, travel, entertainment, and ad media. For the underlying social media products, Facebook daily active users averaged 1.91 billion for June, up 7% year over year, and right on expectations. Monthly active users added up to 2.9 billion, also up 7%, also inline with Wall Street.

Touring active use across all platforms (Facebook, Instagram, Whatsapp, Messenger), what Facebook calls "the family" and what each user provides on average, is really what matters. Daily active users as Facebook puts it, daily active people totaled 2.76 billion for the "family", up 11.7%. On a monthly basis, "DAP" also increased 11.7% to 3.51 billion. While 11.7% growth is good, 37% growth is much better. Average Revenue per person hit $8.36, that's up 37%.

By now, most readers have probably heard of this thing that Facebook CEO Mark Zuckerberg has been talking about called the "Metaverse." In Zuckerberg's words, the Metavers is... "It's a virtual environment. We can be present with people in digital spaces. And you can kind of think about this as an embodied internet that you're inside of rather than looking at. And we believe that this is going to be the successor to the mobile internet. You're going to be able to access the metaverse from all different devices and different levels of fidelity from apps on phones and PCs to immersive virtual and augmented reality devices. Within the metaverse, you're going to be able to hang out, play games with friends, work, create, and more. You're basically going to be able to do everything that you can on the internet today as well as some things that don't make sense on the internet today, like dancing."

Kind of makes me glad I was born and raised prior to technological progress making such an impact (intrusion) on our lives. If you thought that the invention of both cell phones and the internet had already robbed you of any down time you used to have at night, on weekends, or even on vacation, what do you think something like this will do? Who hasn't told the family to go ahead when on vacation, they'll catch up later... and then have to check in a couple of times even after catching up in the afternoon. This will rob you completely of that quality family time. Games? Yeah. More like virtual meetings that you will be immersed in... so you'll have to shave and wear a suit, not like Zoom Video (ZM) where you can wear sweatpants and shave every other day.

On that note, the firm expects 2021 capital expenditures to come to $19 billion to $21 billion, which is unchanged from prior guidance, and total expenses to amount to $70 billion to $73 billion, driven by investments in technical and product talent, infrastructure, and consumer hardware costs.

"In the third and fourth quarters of 2021, we expect year over year total revenue growth rates to decelerate significantly on a sequential basis as we lap periods of increasingly strong growth. When viewing growth on a two year basis to exclude the impacts from lapping the COVID-19 recovery, we expect year over two year total revenue growth to decelerate modestly in the second half of 2021 compared to the second quarter growth rate." ... Facebook CFO David Wehner.

If the dour forward guidance was not enough to rattle a cage or two, there's more. Let's not forget that on April 26th, Apple (AAPL) released an iOS 14.5 update that requires apps including those run by Facebook to provide users with a prompt that allows the user to opt out of being tracked around the internet across third party sites. I don't know about you, but I automatically opt out of every choice I am offered by my phone. Estimates are that Facebook will likely take a hit of at least 5%, maybe more if only 80% of users opt out of tracking. So far, according to Flurry Analytics, 95% of U.S. users and 87% of global users are opting out.

There's more. Remember that the FTC is not done with Facebook. The FTC has until August 19th to amend its antitrust lawsuit that had aimed at separating Instagram and WhatsApp from the parent firm. Not that I think this suit succeeds. What do I know? I actually think shareholder value might increase if there were to be a breakup. In addition, recently (June 23rd) the House Judiciary Committee approved several antitrust measures that could ultimately require that Facebook share data with social media competitors. What that would mean for ad sales would probably not be a positive.

Q2 was likely on a year over year basis, peak growth. Facebook management, as stated, is well aware of that. I am not sure how much the antitrust stuff will actually hurt shareholders. This administration is taking this much, much more seriously than the prior two, and both sides of the aisle feel that they were robbed once in the last two national elections and that social media played a significant role. In other words, there are not going to be a ton of friendly faces.

That said, a break-up could be an equity positive. The real threat is Apple allowing users to opt out of being tracked. This will almost certainly dent ad sales. 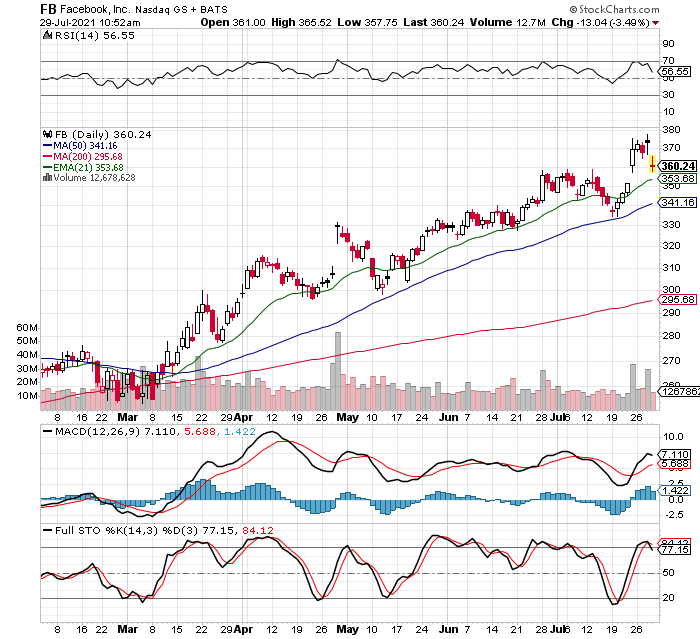 I made a little cash on a limited bearish options play going into earnings. I covered both ends of that trade shortly after the opening bell in New York. So, I am flat the name as I write.

For the long crowd, I do not think that you necessarily have to run for your lives. If I were thinking about getting long the shares, I would wait to see what happens at the 21 day EMA at $353. Why? Take a look at that gap last week in between $351 and $357. That gap has yet to be filled. All while the RSI pulls back from "overbought" territory, the Full Stochastics Oscillator is kind of still there, and the daily MACD remains extended. If you want these, I think you can get them in the low to mid-$350's. I would not short this name. Too dangerous.

(Facebook and Apple are holdings in Jim Cramer's Action Alerts PLUS member club. Want to be alerted before Jim Cramer buys or sells these stocks? Learn more now.)

Get an email alert each time I write an article for Real Money. Click the "+Follow" next to my byline to this article.
TAGS: Earnings | Investing | Markets | Stocks | Technical Analysis | Trading | Media | Technology