Been a long time since I did this stroll. Markets did post a strong January just last year, until the last week of the month anyway. The awful bloodletting experienced late last January would lead to a February that many would prefer to forget. 2019 is different. For one, the "experts" were high on equity markets moving into 2018. No such professional "consensus" was expressed moving into 2019. They say that in the military leaders always train for the last war. In financial markets that would also appear to be true. What is it that Doug Kass always says? To paraphrase, it goes something along the lines of "Nothing impacts sentiment like price." Truer words were never spoken.

So the powers that be have bestowed upon investors the hottest January since 1987. We all know what happened in October that year. Some of us were actually situated smack dab in the middle of the mayhem that October. That said, history never really repeats itself, but it certainly does rhyme at times. Thirty years ago, the New York Mets were about to go into Spring Training as defending World Champions and Phil Simms has just wowed the masses with a spectacular performance in Super Bowl XXI (That's 21 for you Ivy Leaguers). Been a long time for sure.

While Jerome Powell was apparently smart enough to remove the reference to balanced risks to the economy from the FOMC policy statement on Wednesday, the global macro-economic picture has continued to come into focus. One day after the Italian economy officially entered into a textbook recession, the troubled nation put a monthly manufacturing PMI to the tape that is so bad it almost seems farcical. Couple that data with the hideous slowdown now clearly evident in both the Chinese and German manufacturing sectors... and I'd say that we have a situation.

In other words, there will still likely be a safe haven premium attached to U.S. based assets. Not that we're so pretty. We're not, but we're a lot less ugly. At least on this side of the pond we have grossly irresponsible fiscal policy to fall back on. What I'm trying to say, is that I'm still buying gold when I can get a discount. As yields compress I also remain likely to peel back small on my debt portfolio, not much... just back to my "normal" allocation of 15%. Let's just hope a planet in flames doesn't add to much value to the U.S. dollar relative to it's peers now that the U.S. central bank seems to be willing to take a sentient approach to monetary policy.

Cash, in my opinion... while still at above normal levels, has obviously decreased in percentage terms by reason of everything else in our world gaining versus. With what should at this point be substantial dry powder, my thoughts would be to enhance what's working for you. Over the course of that month, that would be what's mostly tied to physical growth (Industrials and Energy), while the Tech sector has become a little trickier. I think that passive investors may want to trade this group by hand, and take it away from the "paint with a wide brush" crowd. Clearly, should positive headlines on trade produce increased business spending, integration of the business cloud will be prioritized above hardware, or the semis. I think we see now that the semiconductor space is recovering, but this rebound will be uneven based on inventories and who's best exposed to the right business lines. See Xilinx (XLNX) .

Swing low. That's how you swing for the fences, right? Low expectations are what investors had for this week's high level meeting between Chinese and U.S. delegations in Washington. Maybe they've learned a thing about managing down what investors are looking for from Apple's (AAPL) Tim Cook. The two sides have seemingly agreed to meet after the Lunar New year (Feb. 5) in Beijing to further the less than specific "substantial progress" made this week. President Trump did add to the optimism with a two-pronged quote that would lead investors to believe if true that a very big deal was in the works, or that "we'll just postpone for a little while." Postpone a deal? Postpone the March 1 deadline for increasing the tax on Chinese imports? I guess we will see.

As the Chinese economy has behaved more like a garbage truck going over a cliff than what we think of as a global engine for growth, I think it obvious that there is now more pressure on the Chinese side to play ball than there was just a few months ago. China has, it would appear, agreed to buy 5 tons of soybeans, but we already knew that China was willing to get aggressive on agriculture and perhaps energy as those are clearly defined needs that can be moved from being satisfied elsewhere without hurting China at a headline level.

The challenge was, and remains, open, fair access to Chinese markets and the protection of corporate property. Playing clean in these areas will cost the Chinese something, which makes items such as this much tougher to reach agreement on. Stay tuned. Rumor will rule the point of sale for the next month. Oh, and today is "Jobs Day".

There are times when deep in a jungle environment (before GPS was invented), when you just aren't really sure where you are. In open country, using a map and compass is much easier. Landmarks are more visible. To stay on course one merely has to aim the correct azimuth at a distant object and then navigate toward that object to do it all over again instead of keeping one's head down to keep both eyes on direction. Out in the bush, the only visible landmarks are the trees. They all look the same and they're all less than five feet away. Basically, you are going to need at least one other guy who's sharp with a map, compass,and doing the math needed to convert magnetic and true north. Oh, and you can't help if you get lost, or something bad happens out there.

The Cold War? Nope. Amazon (AMZN) earnings. The best quarter. Ever. Beats on the top and bottom lines. Revenue up 20% year over year. That's awesome. For anyone not named Amazon. Segment performance like headline performance was indeed strong, but in spots, weaker than consensus. Guidance for the current quarter in terms of sales growth is still presented in a range of 10% to 18% growth, the midpoint of that span below consensus. The stock soared immediately upon this release, and then plummeted. I am long my core position, but I did not add, nor reduce going into the digits.

Does the selloff bother me? Well, I don't think the shares will trade cheap enough to add for any reason other than a swing trade today. Actually, I stand to benefit if the selloff in Amazon can drag Facebook (FB) a little lower, as I am long puts that expire today in that name.

The real takeaway for Amazon for me, and the main reason that I am even in the name on a semi-permanent basis, is AWS. Sales there grew 45%. That's spectacular, but down from growth of 49% earlier in the year. Operating margin for this segment also contracted, from 31.1% in Q3 to 29.3%. Q4 was tough for all, and Microsoft's (MSFT) Azure also performed well but a little erratically. Should dollar valuations ease, and should there be some return to a more robust period of capital spending in the wake of an amicable agreement with China (a lot to ask), the world will breathe a little easier. Markets will at that point (may be getting a little ahead here) produce a salable rally. Understand?

The other key for me is slightly more problematic. Subscription Services under-performed consensus. That's Prime, music, video, etc. That's recurring revenue. Basically, though tiny in comparison to e-commerce, and even AWS, this is a potential gravy train. The firm is going to need to up their game if the intent is to properly compete versus the likes of Netflix (NFLX) and Disney (DIS) as this space only gets tougher moving forward. 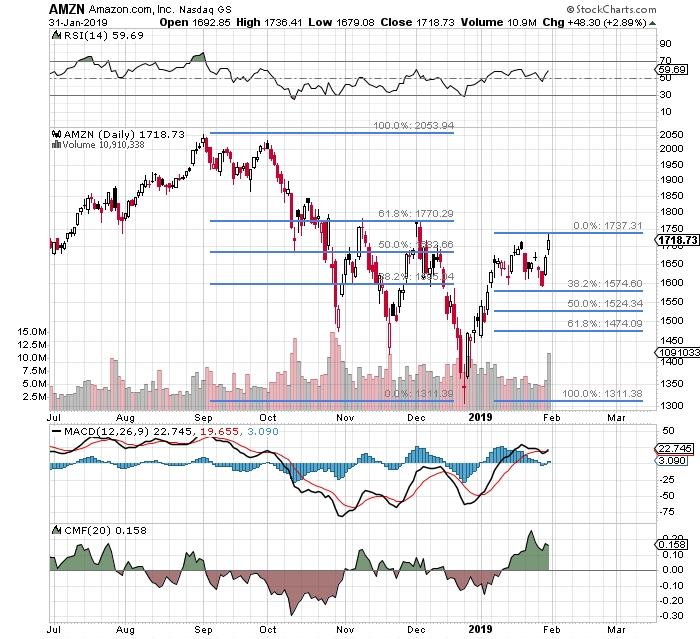 Assuming that Thursday's high of $1736 remains the high for the week, probably a safe assumption at this point, my thought is that with a net basis far below likely short-term probabilities, I don't need to add on this dip, unless the dam really breaks, unless the idea is to score on a swing trade, but that's not investing. That's a different sport. My sweet spot for a core add does not present any higher than the Fibonacci level of $1575. Make no mistake. Amazon is probably the greatest company in planetary history. That's why the firm's rate of past growth becomes ever more difficult unless the firm starts spinning off pieces. Now that would truly be awesome.

Sell Calls? Only if long more than 100 shares.

Buy Options? Only for a day trade.

Get an email alert each time I write an article for Real Money. Click the "+Follow" next to my byline to this article.
TAGS: Earnings | Economic Data | Federal Reserve | Investing | Markets | Stocks | Technical Analysis | Trading | China | Market Recon