Every once in a while, something changes permanently. It could be anything. Something just clicks. We, then as a people, never go back. You don't have to be very old to remember life before the internet, or life before not just smart phones, but cell phones altogether. The investment landscape is no different.

Once upon a time, individual trades took much longer, while also occurring in far greater size per transaction. Your author today put too many multi-million share trades to the tape to remember, even ran the book for numerous IPOs. These were the products of human traders putting together institutional buyers and sellers, and then having to trust that a human floor trader would be able to print these trades "to the tape" with minimal interference from other floor traders that were defending the interests of their own clients at the one centralized point of sale where a given security might trade.

Enter the era where passive investment replaces stock picking, and execution is done electronically in minuscule trade size, with tremendous speed across many, many points of sale. What investors are left with are sector movements that happen at a speed far too great to interact with, but overall market movement that seems to stage itself at levels. What I mean is that an individual stock or industry group will move five to ten percent in a heartbeat, but the equity market itself will now crash over months instead of in a day or two. This, I believe only increases uncertainty.

For you, the tough kid with the attitude, it becomes necessary to adjust to, and trade around a death of a thousand cuts rather than trying to avoid one knock-out blow. This "newer normal" may also have the adverse effect of allowing the non-financial public to remain ignorant to market deterioration until well after the horses have left the barn.

Growing up in Queens back in the 1970's there were certain blocks that a kid would intentionally avoid trying to get home from school. A 1970's kid might take detours through backyards and down alleyways if said kid was lucky enough to see trouble before trouble saw said kid .... even if it meant lengthening the walk home. Every once in a while, that kid might get caught by a homeowner, or even worse... a homeowner's dog.

The Nasdaq Composite jumped the wrong fence on Tuesday. The rest of our major indices all took a nasty beating for the day, but also managed to avoid closing below the lows of 29 October. Not so for the Composite. What observers saw on Tuesday afternoon was an attempt to salvage remaining profits by both funds and individuals as gloom and doom spread their ugliness. Trading volumes at the Nasdaq were higher than one might think as the nation approaches what outside of the financial industry is a four day weekend. The distribution event of course was not limited to the Nasdaq, nor tech stocks, as all 11 sectors took one on the chin, as did nearly every single industry group within.

What Now? I have been telling anyone and everyone that either listens to me on television or reads my work that I was going to be shaving winners as the year wound down. Even though markets are now considerably lower, I do not feel that anything resembling a bottom has been put in, nor do I see overt signs of public capitulation. My neighbor, a normally financially astute individual, asked me how the markets were doing on Tuesday evening. As I started to give her my honest answer, she rushed off to her minivan with her hands over her ears, saying "Don't tell me, don't tell me." The folks still are not tuned in.

As a few Fed officials have suddenly seemed to garner a new level of situational awareness, the majority continue to, at least in public,  leave their heads right where they have been since we started warning the committee that they were harming the economy several months ago... buried squarely in the sand. You kids remember headline inflation? Funny thing about collapsing oil prices... they are deflationary. Duh. It's not just about oil. Go ahead and look at the Bloomberg Commodity Index. Trading deep in the hole with equities, isn't it? 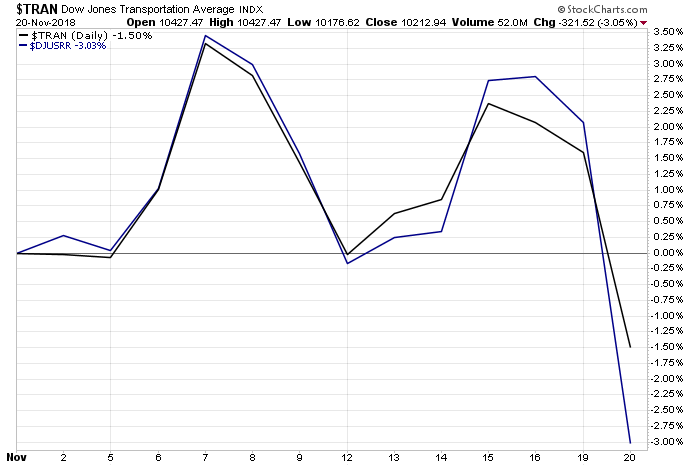 The fact that the rails are selling off twice as fast this month, as are the transports in general, is both reflective of overall commodity complex performance in a rising dollar environment and a vote against future expectations for economic growth. You good folks need to pay attention to this stuff, because we are on our own now.

Now, let's take a look at the the spread between yields offered between two year and ten year Treasury notes. The slope of this curve has returned to it's 50 day moving average since spiking in early October. You do understand that this means quite simply that bond investors no longer trust either the growth story, nor the inflation story. My guess is that those two stories are one and the same, and are now being soundly rejected by market practitioners.

What does all of this tell us? If we are to assume that the individuals running monetary policy in this country are of well above average intelligence, then we must also assume that this policy has been with purpose. We must assume that the central bank viewed the economy as too hot, viewed the housing market as a bubble, and viewed equity valuations as too lofty. The actions taken... simultaneous short term interest rate hikes coupled with aggressive and steady quantitative tightening could only have worked to slow the economy while letting significant air out of asset prices.

Do you trust the FOMC to understand what they have done? Can you trust them to pause? I am in no way certain that we can.

I have a lot to be thankful for. A lot. I was raised by excellent parents that provided for me the blueprints for an honest, ethical adulthood. All I had to do was follow the example provided. I married the only woman that ever stopped me in my tracks, and raised the children that any man could only have hoped for. I am the fortunate one.

I have been provided by my Creator, the ability to work well with numbers, as well as an ability to adapt to temporary defeats and changing environments. I could go into depth on this, as there were many who impacted my professional development along the way, but lengthening this morning note is not my intent. My intent to thank you, the readers for your loyalty, a loyalty that I can only hope to adequately return as we stand shoulder to shoulder facing off against those forces that either set out to harm us, or negligently allow the good folks to be harmed while they pursue goals of their own.

Remember this as we move forward, and remember it until your last day. Team. One word. So, so, so much meaning. We move forward, but only as fast as the slowest among us. There will be those that seek personal glory without concern for the folks. So be it. We will struggle. We will lose sometimes, and we will win. Together. It is "Esprit de Corps" that will define us. Victory.

Did you see that? Foot Locker (FL) went to tape with quarterly results on Tuesday night. EPS? Beat. Revenues? Beat. Comp sales? You got the rhythm. Beat. Fundamentals? No problem. Cash dwarfs debt. Amazing current ratio. The stock has traded up 15% in the dark hours of early morning. Too late? Maybe. Nike (NKE) is also trading higher in the wee hours.

That give me an idea. Dick's Sporting Goods (DKS) reports next Wednesday, November 28th. Do solid results like float all boats? Maybe. Either that, or Foot Locker is stealing Dick's lunch. DKS does not have the balance sheet of a Foot Locker, but I would not say that it is a mess by any stretch. I am not willing to bet the farm, but in a limited way... coming out of Black Friday/Cyber Monday weekend? Worth a thought anyway, especially with the name selling off with the larger group all week. 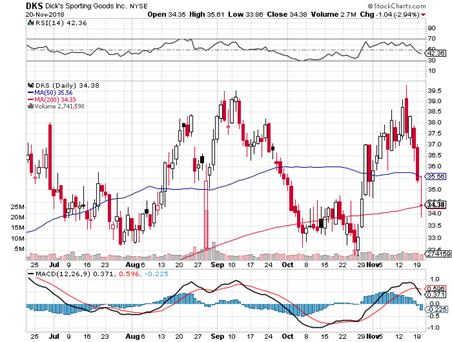 Five months of sideways. Triple tops. Quadruple bottoms. If only someone knew how to make a directional play here in a risk averse way. Well, gang... that's kind of what I'm good at.

Not a lot at stake here. The trader is merely risking $1.20 in an attempt to win back $4. This trader won't have to think much. Either lose $120 per contract, or best case... profit to the tune of a net $280. Might pay for some holiday shopping.

Bad Markets Don't Scare You Out, They Wear You Out

If the S&P 500 was acting like the majority of small-caps we would be calling this a bear market.

T-Mobile's Charts Are About to Ring Dollar Signs

Here's our latest technical analysis and trading strategy on TMUS.