Awake. Not moving. Real slow. So slow. At least at first. Wiggle one foot. Nothing. Excellent. Now the arm on the same side. Then, the other side. Ever make a habit of sleeping outside? That's how you rise. Never want to startle anything that may have crawled inside your bag, or cuddled up just for the warmth. Especially cold blooded critters. Not generous, I know, but those little creatures I can certainly do without. Spiders and scorpions? Check your boots. Shake out your clothes. Every box of Cracker Jack comes with a "toy surprise."

Financial markets have been "cold-blooded" through the overnight, after U.S. equity markets closed at the lows of the Wednesday session. European equities are trading broadly lower. The Shanghai Composite remains closed. That opening, I think still scheduled for Monday should be something out of a sci-fi movie. Wear a helmet for that one. The yield curve? Had a rough night for sure. What the U.S. 3 month T-Bill yields and what the 10 year offers actually did touch each other as you rested that greasy melon between your shoulders. S&P futures are trading well below fair value, but also well above those "zero dark thirty" lows, and a somewhat "healthier" 3mo/10yr spread of roughly 2 basis points has been re-established.

I focus on the 3mo/10yr spread because it is in the opinion of most economists, the most accurate signal sender in terms of future economic performance, as well as the one spread that I believe the S&P 500 reacts to. What gives? Mixed signals out of the FOMC dog and pony show? Yes. That is what caused the late day risk off move on Wednesday. Trading volume was thinner yet again, by the way.

Early Thursday weakness? That's strictly coronavirus-related. The latest information that I see has the number of infected up to 7,783, with 7,678 of those within the confines of Mainland China. Still just five confirmed cases in the U.S. There have now been 170 deaths attributed to this virus, while only 133 folks have fully recovered... meaning that almost everyone who has fallen ill, is still sick. We do not know what the actual mortality or recovery rate really is. We just know that 96.1% of the folks who have contracted this virus have neither passed on, nor as of yet... recovered.

At this point, markets continue to try to price in what is happening, and while feeling around in the dark to discount for potential risk. On Thursday afternoon, Alphabet (GOOGL) joined the growing ranks of global corporations shutting down offices in, and restricting business travel to or around, China. A United Nations panel will meet later on Thursday in order to make a decision on whether or not the declaration of a global emergency is now appropriate.

As there have still been no deaths attributed to the illness outside of China, as there has still been no confirmed transmission of this virus from one person to the next within U.S. borders, we seem to dance, even as the musicians who create the melody fall ill. Earnings have really been hit or miss, but in general there are certainly enough EPS beats, enough revenue beats, that allow the broader equity indices to trade close enough to multiples not seen since the year 2002. Even as capital pours into fixed income. Even as capital is drawn away from industrial commodities.

As mentioned above, there was some mild risk-off movement across out marketplace as Fed Chair Jerome Powell wrapped up his press conference. I thought, by the way, that he handled himself well yesterday as there are no easy answers to the questions posed. Consumer level inflation (in the way measured) running well below 2% this deep into an economic recovery? At this minuscule level of unemployment? Powell is not satisfied, and seems to understand that labor markets probably bear more slack than previously thought (We understood this, but the academic elite were way, way behind in grasping this concept) as accelerating wage growth has been stubborn. Powell sounded dovish in commenting on sub-optimal (their opinion) levels of price stability (actually a mandate accomplished).

From the statement, in regards to growth in consumer spending, the FOMC substituted the word "moderate" for "strong" from December's verbiage. That may not bode well for this morning's GDP print. The Fed also acknowledged weak business investment. This we already knew because we follow the macro, and we are at a minimum, beings who bear an ability to reason.

There was enough though, to rattle the doves on Wednesday. Even as perhaps dovish overtones were sent in regards to the future of the Fed Funds Rate, (suddenly futures are now pricing in a 17% probability of a rate reduction as soon as March) there was discussion on when and how to extract the central bank from its Liquidity Expansion Programs. (I really cannot wait to see where the balance sheet is when the Fed releases that number after the close on Thursday.)

It's no secret that the Fed would like to get out of the short-term repo business. Mention was made on Wednesday of ending those operations by sometime in the second quarter. My guess is not prior to tax season. So, April? May? As for the $60 billion per month T-Bill (not QE, and it really is not, for those who refuse to understand the difference) purchase program, unless we want to see the balance sheet grow larger than where it stabilized (late 2014 through early 2018) at a rough $4.5 trillion, the central bank is going to have to taper the accumulation of these assets. Not to worry, given that we are dealing with short-term paper here, and given that I would expect forward looking policy to focus on the continued, focused suppression of short-term rates, I would certainly expect to see the reinvestment of maturing securities as the outright creation of money supply is drawn down gradually. Equities would not likely appreciate such activity this spring should policy play out this way.

As Advanced Micro Devices (AMD) approaches the 50 day SMA, it looks more and more to me like an add. Thinking of dropping my panic point from $45 to $42, in order to set this up. 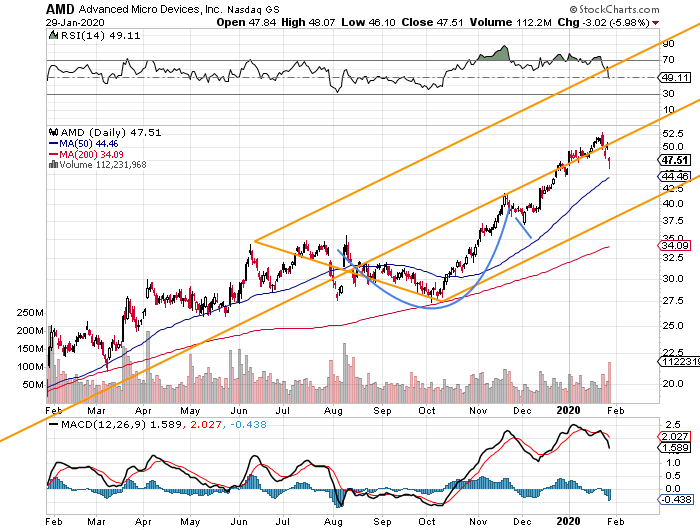 As markets get a bit wobbly, as passive investors hit the exits, potential exists still for undeserved inefficiencies to appear. Take a look at Apple (AAPL) . 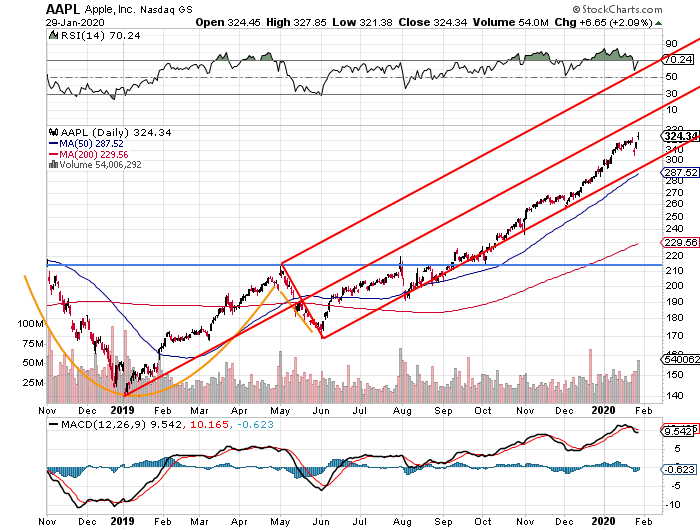 Readers already know that I took my leave of this name on the post-earnings overnight pop on Tuesday... Readers also know that I am merely trying to extract capital and look to reestablish the long in full size. Apple has tested the lower trend line of our Pitchfork the whole way up. Can I get these back at the $300 level? The 50 day line? I am not so bold. I probably start adding small below $320 if I see it. We'll see. How about Microsoft (MSFT) ? 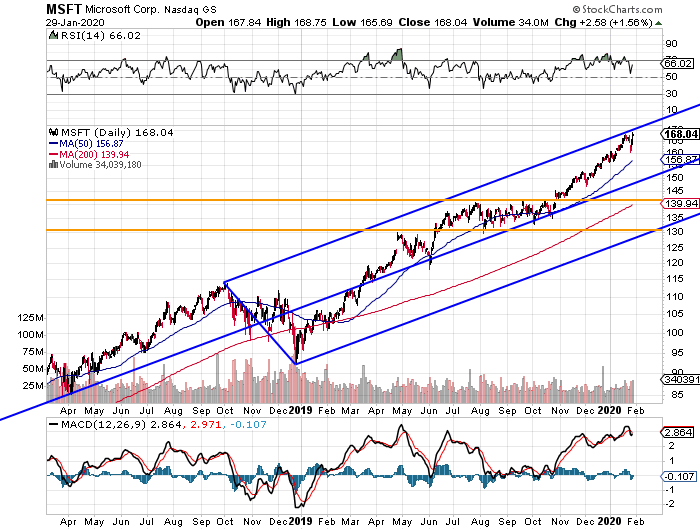 Trading above my $170 price target in the overnight. Simply call CEO Satya Nadella "The Executioner" as this firm is executing an an elite level across all business lines. I really don't want to sell any. I think I give this one a chance to hold that level before I puke anything. The 50 day is really not so far away. Think I'll raise my panic point from $120 to $156.

Facebook (FB) ? On the dip? Heck, I've been wrong before, so I can't tell you what to do, but I haven't pulled any triggers. Decelerating revenue growth? A certainly mature North American business? Expenses rising much faster than revenue. Increase the buyback authorization by $10 billion? You almost had me there.

Tesla (TSLA) ? Holy Moly. Can anything slow this juggernaut? Can China? This one, for shorts is like playing chicken with 18-wheelers on the interstate. I no longer doubt Elon Musk. Learned that lesson a long time ago.

Get an email alert each time I write an article for Real Money. Click the "+Follow" next to my byline to this article.
TAGS: Earnings | Economic Data | Federal Reserve | Investing | Markets | Stocks | Technical Analysis | Trading