Stressed? Who isn't stressed in this, the year of the pandemic. The year of lost social interaction. The year of the text... "How ya holdin' up?", and not "Hey, wanna meet for a beer and burger tomorrow night?" The year of stress. Public health. Personal heath. Mental health. Financial stress. Clorox (CLX) scarcity stress. Toilet paper stress. Can't wait to say goodbye to 2020? Me neither. Never know what's around the corner though. That light at the end of the tunnel we think is daylight with vaccine distribution underway. We also know that as the virus mutates in an attempt to survive itself, that the light could just be an oncoming train.

On Friday evening, the Federal Reserve came to some conclusions based on the results of two hypothetical worst case type scenario simulations that put the nation's 33 largest banks under the microscope. The central bank found that should unemployment remain high, and the economy not recover for several quarters, these banks could suffer in aggregate as much as $629 billion in loan losses. Why are these results more significant this year? You'll recall that the Fed had already restricted the largest banks ability to return capital to shareholders. Not only were dividends curbed to the point where payouts could not exceed its recent profitability, but share repurchase programs were essentially put to a halt.

While the $600 billion in potential loan losses reads horribly, the central bank has basically decided that the nation's big banks can withstand the negative impacts of this pandemic. The Fed, late Friday... decided that these banks could restart repurchase programs in the first quarter, but there still will be restrictions on just how much can be returned. The aggregate dollar amount between stock repurchased, and dividend paid can not exceed any bank's average quarterly profit over the four most recent quarters.

Just an FYI, under both scenarios, all 33 banks met risk-based capital requirements. In addition only HSBC Holdings (HSBC) failed to remain above its leverage requirement. The Fed added that capital requirements will not be reset at this time, and that these restrictions will remain in place through March but could be extended beyond.

If you were trading after hours on Friday, you probably noticed that the vast majority of these 33 bank stocks caught a bid. Almost immediately, Goldman Sachs (GS) announced plans to resume that firm's share repurchase program next quarter, and JP Morgan (JPM) announced the authorization of a new $30 billion common equity share repurchase program. JPM added that the bank's quarterly dividend will stand at $0.90, yielding just above 3% on an annual basis. In fact, for interested investors, the firm had already announced that shareholders of record on January 5th will receive this quarterly dividend payment on January 31st.

Readers who have been with me for quite some time know that I use to focus on banking. Once upon a time, the group was perhaps my most active. This year of 2020 I had for an extended period of time, over the summer months, no exposure to the banks at all, after playing JPM extremely well earlier in the year, playing Citigroup (C) moderately well, and playing Wells Fargo (WFC) quite poorly indeed.

I have been back in JP Morgan since very early October as I have always considered this name a clear "best in class" company with a unique ability to retain profitability despite various conditions impacting consumer or investment banking, net interest margin, trading, or wealth management. The firm also runs with something close to a pristine balance sheet that allows for an elevated valuation relative to its peers, but not relative to the broader stock market at large. 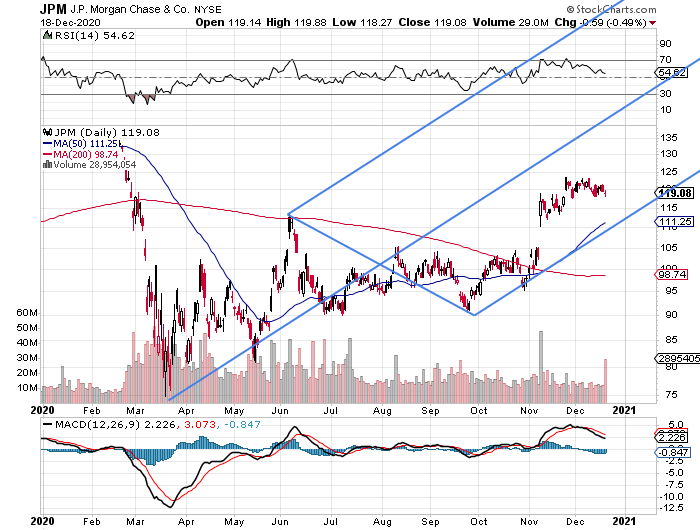 As for JP Morgan, the June through September period provides a very broad base for our Pitchfork model. While I am long this name, and I do have a target price of $141 (January 2020 high) on the name, the gap created in early November has never been filled, and is on my mind. $141 would roughly meet up with the central trend line by year's end. I do not expect to see that target by that date. I would expect more volatility this and next week, and that will depend on the spread between the yield spread between what the three month US Treasury bills pays and that of the 10 year Treasury Note more than anything else.

Beyond that, I still have my eye on Wells Fargo as that name draws closer to a "golden cross-over of its own 200 day SMA by its own 50 day SMA. I kind of like Goldman Sachs as a company, and if they can successfully move large parts of the company from New York City to southern Florida, their tax burden, and operating margin should improve, not to mention sheer improvement in quality of life issues for employees. In addition, Bank of America (BAC) is on my radar. Citigroup is not based on an elevated exposure to international business. Oh, and I am long US Bancorp (USB) for some regional exposure.

(GS and JPM are holdings in Jim Cramer's Action Alerts PLUS member club. Want to be alerted before Jim Cramer buys or sells these stocks? Learn more now.)

Get an email alert each time I write an article for Real Money. Click the "+Follow" next to my byline to this article.
TAGS: Dividends | Economy | Investing | Markets | Stocks | Technical Analysis | Trading | Banking