There I was. Thursday afternoon. The Fox Business Network. The anchor came to me first. Question... My thoughts on recent (not to mention nearly daily) all-time highs for our broader equity markets. Answer? It's all about the money. Show me the money, Sarge. You bet.

We already know that the Federal Reserve has patched up overnight cash markets as often (which is very often) as needed. That same Fed is expanding it's own balance sheet (yeah, that's money supply) as rapidly ($60 billion per month) as responsibly possible. This program intelligently targets T-Bills (the short end of the curve), while allowing Notes and Bonds (the long end) to dangle in the breeze (free market pricing). Get some.

In response to potentially positive headlines swirling around the global (primarily U.S./China), an optimistic vibe has formed around the idea that global economic growth rates may have bottomed. This has placed intense selling pressure on the longer end of not just the U.S. Treasury yield curve, but on long-dated maturities globally. In fact, on Thursday, yields for French 10 year paper went positive. Even the safe haven German 10 year made progress. Fun fact... On Thursday, the aggregate amount of global negative yielding debt dropped to $12.5 trillion, down from a peak of more than $17 trillion as recently as August. Ooh-stinkin'-rah.

By the way, composite mass selling of longer-term global debt forces congruent mass sales across several equity market sectors or industries known as dividend payers, or bond proxies. These would be your Utilities, your REITs, even your Telecoms and some Staples. This is why breadth was not overtly positive for the day, even if the effect is overtly positive for equity valuations broadly. Not rocket science. This also creates larger cash balances.

We already knew that too many portfolio managers as recently as last week were running these cash balances at levels too large for where we currently are on the charts. As early November melts into the holiday season, there is pressure on these underperformers to chase the market. Woe be to the underperforming fund manager holding onto a sizable chunk of cash as equity prices gallop away. Ever wonder why I work for me? I'm a nice guy. I think. Fact is I don't like having customers. How can one trade effectively if burdened with fiduciary responsibility? The day you see me working for someone else, you'll know that I have probably gotten myself into a jam.

Oh, one more thing. Savings rates are at more than decade highs for average Americans. I know that the media likes to tell the folks that they have gone nowhere. Their savings accounts beg to differ. According to the St. Louis Fed, U.S. Personal Savings rates have been running above 8% for most of the year. That's the highest rate seen in the U.S. since a brief run in 2012, and to be honest, the highest sustained rate of personal savings that Americans have experienced since the administration of President George H. W. Bush. That's back in the early 1990's for those of you who think we fought the French in the Civil War.

So, we get it. There's enough money on the table. What happening in real time? Well, tell me. What do you see? Much higher trading volumes for the past six sessions, right. So what has moved over the past week or so? Energy is hot. The Financials are hot. The Industrials and the Materials are hot. Tech is also hot, but semiconductors and hardware are much hotter than is software. On heightened volume. Hmm. I already told you what's cold. Ureka. Now you know what the hedgies and the fund manager are doing. You're a genius. See how easy that was.

Oh, look at that... EPFR Global is reporting that $7.5 billion poured into both mutual funds and exchange traded funds that invest in equities globally for the week ending this past Wednesday. That does not even include stock pickers like us. By the way, EPFR Global notes that this is the largest one week net inflow that they have seen since January 2018. From an equity perspective, the entire planet is getting hotter. While the broader U.S. equity indices are are just off of all-time intra-day highs, the FTSE All-World index approaches the highs of early 2018.

Thinking about getting short in front of all this cash? All this momentum? Good luck. Not me.

Round and round it goes. When will it stop? Nobody knows. Actually, that's a lie. There are four possible headline risks that could put the kabosh on these markets. One would be a breakdown in U.S./Chinese trade talks. A second would be a collapse of a major international bank (What's up with these overnight cash markets) bearing broad systemic exposure. A third would be an unexpected geopoitical event, and lastly a fourth would be the markets having to price in a chief executive in the U.S. that comes bearing socialist ideology.

Omitting all of these potentially negative impacts, the current expansion in equity valuation multiples will come to a halt when medium to longer term debt yields enough to both slow demand for capital expenditure on a business level, while also attracting investment dollars otherwise meant for equities. That's when I say "sold to you", cowboy.

The day grows long. A figure stands upon a small hill. Alone. Armed with nothing but sheer will and a code of discipline. Unknown to the shadowy figure, a much smaller individual watches from afar. Maybe more than one smaller individual. Learning. Adapting. Learning some more. Worthy?

Every child has a hero. One can be that shining beacon of guiding light. Or one can wilt in the face of such pressure. Who will you be today? Tomorrow? What will those eyes that watch actually see. Will the see loyalty? Bravery? Decency? Will they bear witness to honor, clean? We can do this, even if once fallen. You and I. Personal courage. Where it can all begin. Or end. Mom? Dad?

Small World After All

Bet you thought I was going to discuss the Walt Disney Company's (DIS) fiscal fourth quarter earnings release. I know a lot of you are probably in that name, and I think it will deserve it's own piece. I'll serve that one up on Real Money later this morning.

An old Sarge fave, one that I have not been in for a few months reported it's third quarter performance on Thursday night. Remember Planet Fitness (PLNT) ? That name posted adjusted EPS of $0.36. That bottom line number, though good for 29% y/y growth just met expectations. On the top line, the firm printed revenue of $166.82 million (+22.1% y/y), which did beat the street. The shares roared overnight in response. Why? I mean these results are solid, but is up 8% in after hours good?

The real news was in comparable sales and increased guidance. System-wide, this metric reported in at a whopping 7.9% growth rate versus a consensus of just 7.3%. Franchise owned gyms did even better at 8.1% versus corporate owned sites that showed growth of just 4.9%. This pushed net income 45% higher to $29.7 million compared to $20.5 million for the same period in 2018. Adjusted EBITDA expanded 22.2% to $65.7 million from $53.8 million last year. However, adjusted EBITDA margin of 39.4% did just fall short of consensus. 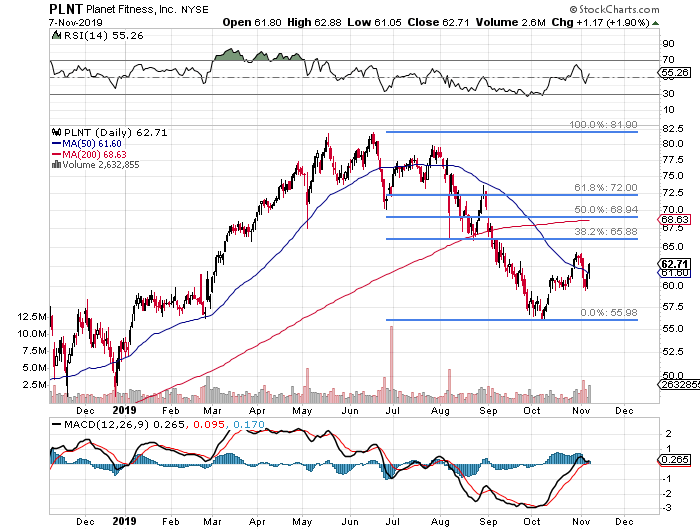 The last sale that I see is just above $68. That's deep into pajama-time, by the way. My thinking is that with a 200 day SMA of $68.63, and a 50% retracement of the June through October selloff standing at $68.94 that this area could provide stiff resistance once the regular session opens. Needless to say, I am not going to grab any of these shares on the rip.

We'll have to check on option market pricing after the open, but my thinking, depending on price, right now is this: Maybe a January of February "bull cal spread" subsidized through the sale of discounted puts with similar expiration dates. Just a thought for now.

Get an email alert each time I write an article for Real Money. Click the "+Follow" next to my byline to this article.
TAGS: Federal Reserve | Investing | Markets | Options | Stocks | Technical Analysis | Trading | Consumer Services