During Monday's fast-paced "Lightning Round" segment of Mad Money, one caller asked Jim Cramer his thoughts on Magna International (MGA) : "Magna is good. I would wait a few weeks and then buy more," he responded.

Let's check out the charts of MGA.
In this daily bar chart of MGA, below, we can see that prices made a high in early June and have corrected lower. So far a low in late August has held. We might see some testing of the August low but that might be considered a buying opportunity at this point in time.
Prices are below the declining 50-day moving average line and below the cresting 200-day line. The 50-day line is poised to cross below the 200-day line for what is commonly called a dead or death cross. This is a mechanical sell signal signal and often late.
The On-Balance-Volume (OBV) line declined into late July but has since moved sideways suggesting a balance now between bulls and bears. The Moving Average Convergence Divergence (MACD) oscillator made a higher low in late August and a cover shorts buy signal.

In this weekly Japanese candlestick chart of MGA, below, we see a mixed picture. Prices are below the cresting 40-week moving average line. The weekly OBV line shows stability in recent weeks while the MACD oscillator is testing the zero line but narrowing.

In this daily Point and Figure chart of MGA, below, we can see that the software is projecting an upside price target in the $88 area. 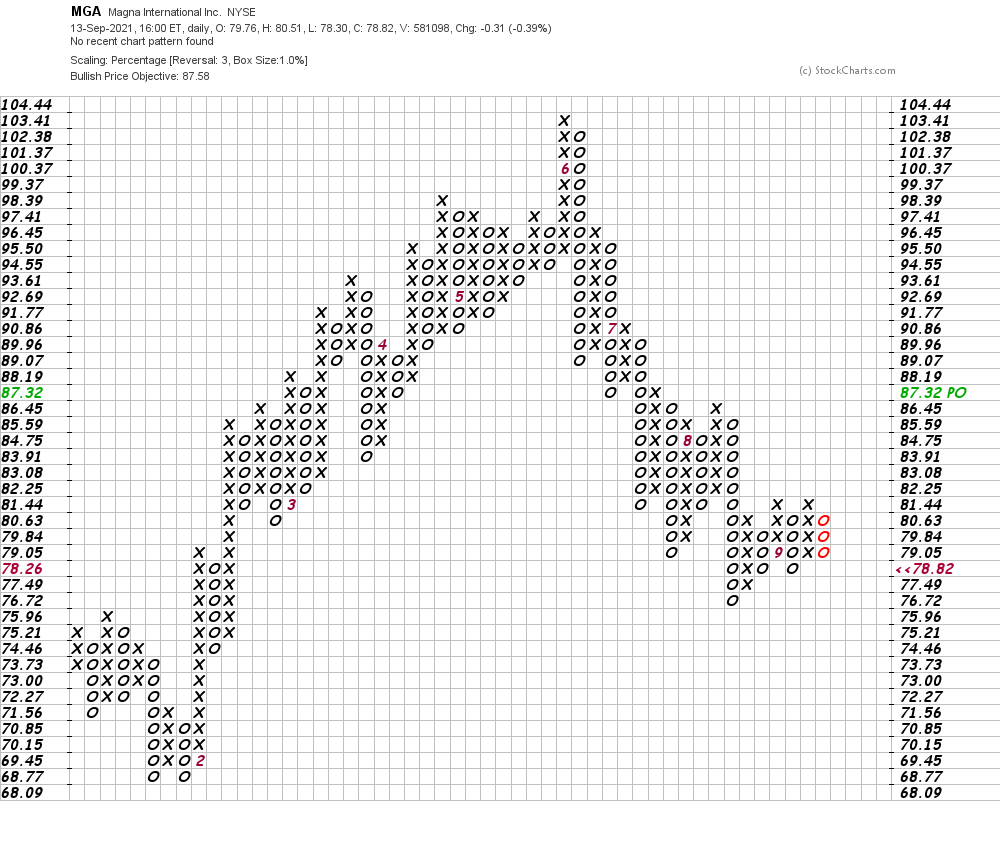 Bottom line strategy: MGA has corrected to the downside and now the charts and indicators are looking better. Traders and investors should be buyers around current levels risking below $75. The $88 area is our first upside price target.
Get an email alert each time I write an article for Real Money. Click the "+Follow" next to my byline to this article.
TAGS: Investing | Stocks | Technical Analysis | Trading | Automobile Components | Mad Money