We seem to be dominated by a handful of big names right now. If either Cathie Wood or Chamath Palihapitiya say jump, the market doesn't ask how high. They continue jumping until exhaustion, legs breaking, or success is achieved. Their success has become self-fulfilling to a degree.

I am impressed with ARK Innovation ETF's  (ARKK) marketing genius. They publish their daily trades. The market, in turn, bid many of those stocks up afterhours or in the pre-market. They appear on CNBC. Like Pavlov's dog, we salivate hearing an announcement Cathie Wood will be appearing on CNBC. The same is true for Chamath. Investors and algorithms, I would imagine, chomping at the bit to buy the tickers mentioned. Your own research? Who has time for that in this market?

Well, you should, for one. Buying blindly into anything because a person says so is silly, and this coming from a person who often publishes trade ideas. Even ARK isn't bulletproof. Actually, the daily chart of the ARK has a major trouble spot. Let's take a quick look. 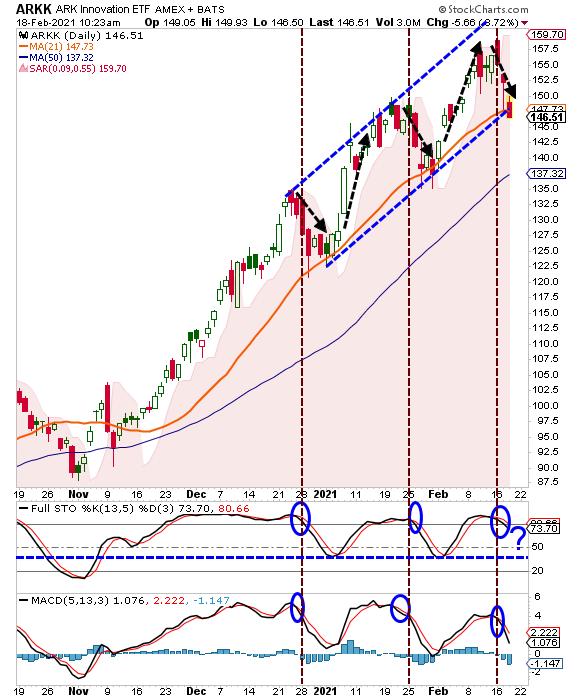 The recent pullback isn't uncommon. This is the third retest of the support trendline in the current bullish channel, but there's one big difference here between today and the last two retests. Those retests make great buying opportunities. While move things are the same, including bearish crossovers in the parabolic stop-and-reverse (PSAR), MACD, and Full Stochastics, there are two big differences. First, the high did not reach the resistance trendline. I will say it was close enough that I probably give it a pass, but my bigger concern is the past two times we hit the support level, the MACD and Full Stochastics were approaching consistent low points. This time around, the Full Stochastics has barely crossed out of overbought territory.

What this means is the support point may be closer to the 50-day simple moving average (SMA) and the low from February rather than bouncing from this level today. That being said, if you want to take a stab long, this is the place to do it, but keep a stop rather tight. I'd say in the $144 to $145 area. If we close under $145 then I wouldn't look to buy again until we hit the 50-day SMA around $137. We haven't seen the 50-day SMA since November, but I suspect the area would hold.

If you want to ride Cathie's coattails, those would be my marks.

Get an email alert each time I write an article for Real Money. Click the "+Follow" next to my byline to this article.
TAGS: ETFs | Investing | Markets | Stocks | Technical Analysis | Trading