I want to like Kohl's (KSS) . I really do. My wife is a fan of our local store. She drags me along on her visits. It's not really dragging. She knows that I am a numbers nerd, and knows that when she wants to leave, she will have to find me either counting open registers, measuring line length, or interviewing employees that had no idea what they were getting into. One thing that I have recently found mildly disconcerting is that though I have thought the deal with Amazon (AMZN) to be a significant positive, the employees seem to have no idea if it is helping their business. I would have thought this to be a theme aggressively pursued among their ranks. A few even seem to act as if I am breaking this news for them.

Two days ago, I ventured into retail in my Market Recon piece in response to comments made by JP Morgan's Matthew Boss. I briefly stated why I was long Macy's (M) and Lululemon (LULU) ... so far so good on those, and why I was staying out of Kohl's. Phew!! on that side-step, because I was indeed tempted. I still am. Kind of.

This is a problem. While in his comments earlier this week, Boss saw some cause for optimism across several names, Kohl's among them, other members of the analyst community have sounded off quite differently since. On Tuesday, it was Randal Konik at Jefferies who downgraded Kohl's to a Hold rating while taking his target price down to $52 from $65. A day later, Cowen's Oliver Chen also downgraded the stock to Market Perform. Chen cut his target price to $52 from $56, and pointed specifically to traffic levels at the stores as well as performance in women's apparel. You want to go further back? The real champion among analysts in this name has to be Morgan Stanley's Kimberly Greenberger (who whether she wants it or not, is a significant follow for this author). Greenberger maintained her Underweight rating way back on December 19th, reducing her target to $41 from $42. She has basically been telling us to sell Kohl's for years, and she has been right. For the record, Konik, Chen, and Greenberger are all highly rated by TipRanks.

A number of nasty looking same store sales were reported on Thursday morning for the holiday season. J.C. Penney (JCP) and L Brands (LB) reported monster movie type performance, forcing L Brands to reduce forward guidance. J.C. Penney somehow affirmed projected positive fee cash flow for the year. The J.C. Penney in my neck of the woods has closed, reducing my filed work concerning that name. The Victoria Secret near me though? Gee whiz, they have one of the largest physical footprints in "my mall", and that place is ghost town. Yes, I take my wife with me, What? Did you think I'd walk around one of those stores by myself?

Now, Kohl's. Same store sales of -0.2% year over year, and that's not really so bad versus the broader industry. The firm now expects full year EPS to land toward the lower end of the already lowered range of $4.75 to $4.95. The street is already at $4.86, so probably lower than that. The firm's full year guidance had been for $5.15 to $5.45 as recently as November. The firm blamed weakness in woman's apparel this morning, just as they had in November.

Can Kohl's Turn This Around?

For one, the firm has deals in place that one would think will push business. In addition to the highly publicized Amazon deal, there are partnerships with Planet Fitness (PLNT) and Fanatics. In addition, the stores are not mall-based, operating margin as far as we know still runs above 6%, better than at a number of peers. CEO Michele Gass noted improvement on the digital side on Thursday morning.

Oh, there is also the dividend. Kohl's at a last sale of $45.68 now yields 5.9%. If sustainable, and the firm has produced operating cash flow of $1.7 billion over the past 12 months, this is what calls me to the name more than anything else. 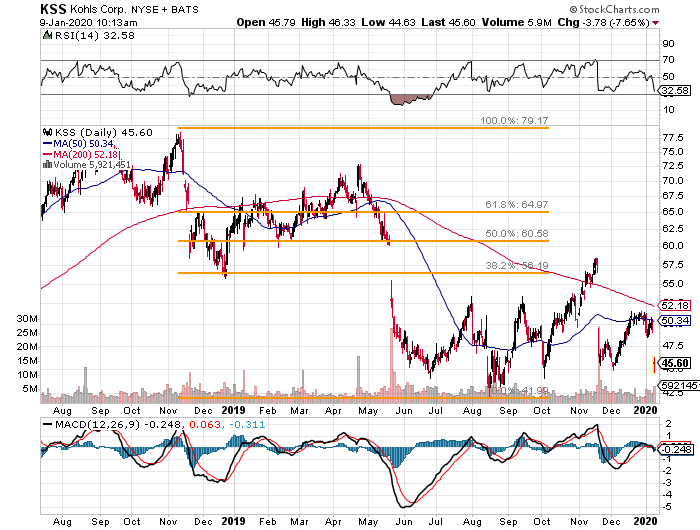 We now see the shares test the lows of December with potential for a more than 24 month low really not that far off. The firm will not report report fourth quarter earnings for some time... March 3rd, tentatively.

I am not going to play this dip. I am not sure that this is the right call, but I am already in bed with Macy's. I don't need another one of these, and that capital is stating put at least through February 5th. If a retail trader were willing to get after KSS at this level, I would suggest writing April $50 calls for a rough $1.75 against the long, At least that would knock net basis down below $44.

(Kohl's and Amazon are holdings in Jim Cramer's Action Alerts PLUS member club. Want to be alerted before Jim Cramer buys or sells these stocks.? Learn more now.)

Get an email alert each time I write an article for Real Money. Click the "+Follow" next to my byline to this article.
TAGS: Investing | Options | Stocks | Technical Analysis | Trading | Retail | E-Commerce