All the major equity indexes closed lower again on Wednesday as the recent market correction continued. Market internals were negative on the NYSE and Nasdaq as trading volumes rose from the previous session. All closed near their intraday lows as all held their near-term support levels except for the VALUA. Yet all are still in near-term downtrends.

We now find the data intensifying its bottoming signals. At this stage, we now need the charts to confirm the data implications that the correction low has been achieved. 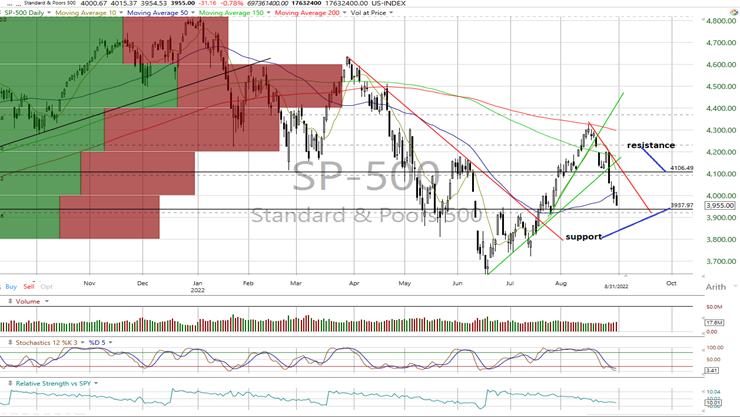 All the major equity indexes closed lower yesterday with negative internals on higher volume for the NYSE and Nasdaq as all closed at or near their intraday lows. All held their near-term support levels except for the VALUA that violated support and its 50 DMA.

As such, all the charts remain in near-term bearish trends and below their 50 DMAs and lack reversal signals. One such signal could be a "hammer bottom" where the indexes trade deeply lower in a session but close near their highs of the day. That has yet to be seen.

Meanwhile, cumulative market breadth remains negative on the All Exchange, NYSE and Nasdaq. The only positive signal from a technical standpoint are the stochastic levels that are extremely oversold and at the June market low levels. However, they have yet to furnish bullish crossover signals.

The data continues to intensify its positive signals even further.

The % of SPX issues trading above their 50 DMAs (contrarian indicator) dropped to 41%% and remains neutral versus its prior cautionary implication at 84% near the market's recent highs.

The Investors Intelligence Bear/Bull Ratio (contrary indicator page 8) is 29.6/45.1 is neutral with an increase in bears.

The forward 12-month consensus earnings estimate from Bloomberg for the SPX rose to $232.68. As such, the forward P/E is essentially at ballpark fair value, versus its prior premium, via the "rule of 20" with the SPX forward multiple down to 17.0 and the "rule of 20" at 16.9.

The SPX forward earnings yield is 5.88%.

The 10-year Treasury yield closed higher at 3.13% and is still within what we view as its current trading range with support at 2.92% and resistance at 3.16%. However, it is indicated this morning at 3.2% and above resistance.

While the data suggests a buying opportunity exists, the charts remain near-term bearish and lack signs of reversals. We now believe said reversals are necessary to fully embrace the data implications.