Before I tried to catch a couple of hours of sleep, Beijing had taken steps to quarantine the city of Wuhan, a city of 11 million people a few hundred miles west of Shanghai. As the government has temporarily halted both air and rail travel into or out of that city, the Financial Times very early on Thursday morning reports Wuhan's hospitals as being "overwhelmed." The same FT article reports confirmed cases having now been diagnosed in the U.S., Japan, South Korea, Thailand, Taiwan, and Macau (that's important). Over the radio, I hear that Russia and Mexico are being added to that list.

The Shanghai Composite, on Thursday morning, sold off 2.75%, Hong Kong's Hang Seng Index gave up 1.5%. It's not just fears that this virus grows into a regional or global pandemic that have started to enter the minds of market participants, it's also the timing. The Lunar New Year is this Saturday, January 25th. This new year is celebrated across much of Asia, and kicks off the 15 day Spring Festival that culminates with the Lantern Festival. This period is one of great significance to these economies, and restricting travel during this period will reverberate around the globe even if the ailment itself is somehow contained.

Ever been to Las Vegas during China's Spring Festival? Packed like sardines. The potential for suddenly reduced demand is already being felt in airline, hotel, casino, and some retail stocks that rely on international tourism as a driver. U.S. equity markets worked their way off of record highs early in the Wednesday session, only to close near the lows of the session on significantly lower trading volume than seen a day earlier.

The market impact for U.S. investors has been seen in more pronounced fashion in Treasury markets. Yields for the U.S. 10 year note collapsed a bit on Wednesday, and now trade around 1.74%. This has reduced the spread between the three month T-Bill and 10 year paper to a mere 19 basis points over night. You may notice that the Financial sector actually posted gains for the day on Wednesday, which would not make sense, given the compression seen in these spreads. Looking a little closer, one sees that the banks, even with the help of Ally Financial's (ALLY) post-earnings rally, did not contribute to that performance. This was driven more by both Consumer and Mortgage type names in response to the blowout report for December Existing Home Sales. Sarge name Essent Group (ESNT) was a Wednesday performer.

We know that housing markets limped into 2019 from late 2018. We also now know that precisely the opposite is true one year later. The housing market, after half a year of gaining momentum, is heating up as the calendar turns once again. On Wednesday (yesterday), December Existing Home Sales hit the tape at a seasonally adjusted, annualized rate of 5.54 million, +3.6% month over month, and an incredible 10.8% over December 2018. How about New Homes? The Census Bureau is set to release that number this Monday, but we already know that Housing Starts for December, (once seasonally adjusted and then annualized) posted last Friday, also by the Census Bureau were up month over month (+16.9%) and year over year (+40.8%) to levels not seen since prior to the financial crisis.

Think that's hot? Yeah, you do, because it is. Though momentum has been building, why now this explosion is such activity? Low mortgage rates? They've been low for a long time. Low mortgage rates at the same time as every one working who wants to work? There is something to that. Low mortgage rates at the same time that everyone is working who wants to work, while Americans are saving a greater percentage of disposable income than at anytime since 2012, and over a sustained period, since the early 1990's? I think we have a winner.

Will the pace of this activity slow down from here? Unfortunately, I would think this to possibly be true. The activity has resulted in greatly reducing the supply of existing homes for sale. That supply nationally had contracted to 3.0 months' worth in December from 3.7 months in November. This forced the median sale price nationally for an existing home sale in December up to $274K, a 7.8% increase. Inventory at the lower priced end of the market is contracting far faster than at the luxury end. That tells me that this is household formation, not house hopping. That's a good thing, but a population that is only now recovering emotionally from the crisis that began more than a decade ago will in my opinion, be unable to chase rising prices, even if their paychecks are going a little further.

Fresh off of the Phase One agreement between the U.S. and China, and the passage of the USMCA trade deal encompassing North America, both accretive to economic growth... President Trump, from Davos, appeared to set his sights on improving the condition of trade with the European Union. First, President Trump and French President Emmanual Macron spoke, and managed to ease tensions between the two nations. Paris suspended trying to collect on planned digital tax payments from U.S. technology firms until next year. In return, Washington delayed the imposition of placing tariffs on French made goods to be imported into the United States. All good? Sort of.

Yes, this is positive. This does not solve the problem. The EU ran a trade surplus with the U.S. in 2019 of $162.6 billion. That said, the U.S. has traditionally exported three times as much goods and services to the EU as it does to China. That makes reaching a new trade deal with Europe trickier, as does the fact that most of Western Europe lines up as a bloc strategically aligned with Washington. President Trump has said that he would expect to negotiate a trade deal with the EU prior to the U.S. election in November. The president talked tough: "They're going to make a deal, because they have to, they have no choice." There was then talk of retaliation from the European side should tariffs on European goods increase.

A Lack Of Trust

Just when is a complete lack of trust a good thing? I have written you on this topic in the past, but it certainly has been a while. Several months back, I confidently got involved in cyber-security, Zscaler (ZS) to be more precise. Money had to flow into the group. That was what I thought. I was wrong... for a while anyway. The industry from the perspective of equity stakeholders had become overcrowded, over-valued, and many investors hardly new the differences between the firms. Money went the other way over the final three or four months of the year. The tensions between the U.S. and Iran got a bit messier. Talk of some kind of coming cyber attack became the hot topic. Investors suddenly noticed juts how cheap some of these stocks had become.

The key term is "Zero Trust". What it is would be a key technology in an always evolving industry. What it entails is refocusing on internal threats as much as external, finding ways to identify stolen credentials, ensuring that devices requiring entry into a network a free of malware, and verifying user identities prior to granting access. In other words... zero trust. As this technology develops, users are granted only compartmental access. Barely what the user needs to get the work done. Think of an ocean liner. many seal-able compartments meant to greatly reduce the possibility of the ship being taken down by a breach in one area. Same idea.

The shares of firms focused on this burgeoning security technology have come off of their lows. Well off of their lows. Yes, my Zscaler among them, but other interesting names would be Ping Identity Holdings (PING) , Akamai Technologies (AKAM) , Palo Alto Networks (PANW) , and CyberArk Software (CYBR) among others.

Incredibly, I find myself up 22% in a name that I recently had considered one of my weaker calls. The firm is expected to report in early March. Expectations are for EPS of $0.03 on revenue of $99 million. A revenue print like that would be good for growth of 33%, which would be a continuance in the deceleration of this growth from very lofty levels. Remember, the firm guided toward more pedestrian performance not just for the current quarter, but for fiscal 2020 before margin is thought to possibly improve in 2021. 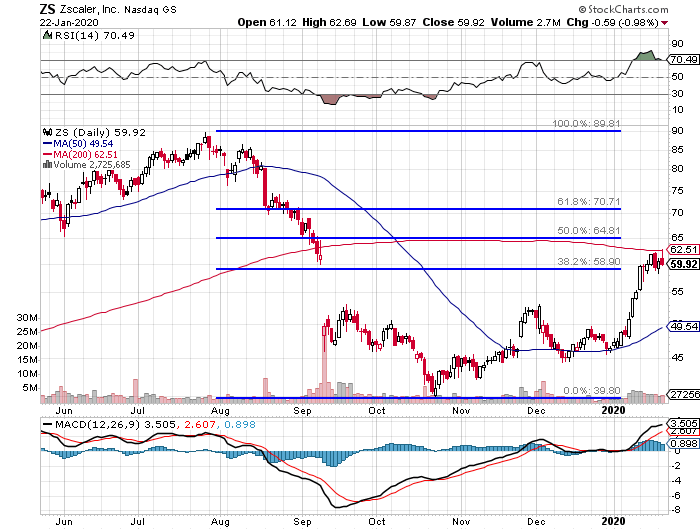 You will notice these shares coming off of extremely elevated readings for Relative Strength, with a positive, but perhaps unsustainable looking daily MACD. What I see on this chart that really sticks in my ear is the 200 day SMA. This position has grown in size as the shares had weakened in late 2019, and has now turned into "found money." I don't want this to be the one that got away.

The shares have met resistance at that 200 day line of $62.51 more than once this week. Take a look at the last few days' action in the name.

Know what I think? I think I give this stock one more chance to unlock that door. Upon one more failure at this level, I think I take 40% of the position off, and try to buy it back lower. Maybe at $53. That spot formed resistance first in September and then again in late November/early December.

Those in a similar position will find Late February puts a bit on the expensive side at least for my taste. Selling "covered" March 20th $65 calls for almost three and half bucks might look interesting. Note that I said "covered" calls. One does not want to get caught wearing the Emperor's new clothes in this space.

Get an email alert each time I write an article for Real Money. Click the "+Follow" next to my byline to this article.
TAGS: Investing | Markets | Stocks | Technical Analysis | Trading | Treasury Bonds | Housing Market | Cybersecurity | China | Europe

As Biotechs Seem to Have Bottomed, Here Are 3 to Consider

I expect biotech M&A activity to pick up in the back half of 2022.

Bitcoin Tumbles Towards Washout as Crypto Enters 'Get Me Out' Phase

Keep your seat belts low and tight, here's where we may be headed.

However, long-term investors would do well not to try to pick a bottom in the chipmaker's stock.

Now is not the time to build longer-term positions, but there may be some volatility for short-term traders.