E.W. Scripps (SSP) has reportedly been shopping Stitcher for several months, but it's now close to selling the podcast platform to Sirius XM Holdings (SIRI) . The move into podcasting would follow similar moves by Spotify (SPOT) and iHeartMedia (IHRT) .

Let's check on the charts of SIRI to see if the indicators have improved.

The On-Balance-Volume (OBV) line made a low in March but a deep retracement in May. The OBV line improved in June telling us that buyers were being more aggressive but the overall trend of the OBV line has not been impressive.

The Moving Average Convergence Divergence (MACD) oscillator has only moved above the zero line briefly. Not a sign of sustained strength.

In this weekly bar chart of SIRI, below, we went back 10 years. We can see that the decline this year has broken a major uptrend. The peak in 2018 was retested in early 2020 giving us a potential double formation. I use the word potential in that the shape of the pattern is right but I am used to finding double top patterns at a much higher price level.

The weekly OBV line shows weakness since 2018 and means that liquidation (selling) has been going on for several months.

In this daily Point and Figure chart of SIRI, below, we can see that the software is generating a potential downside price target of $2. 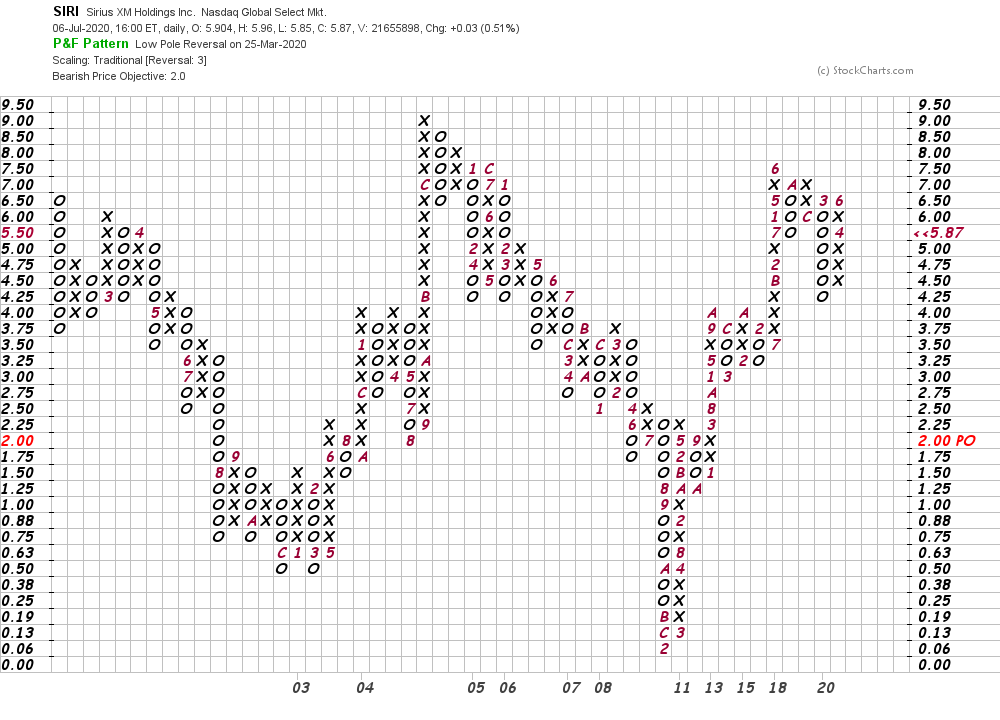 Bottom line strategy: The charts and indicators of SIRI are not bullish so I would suggest changing the channel - avoid the long side.

Get an email alert each time I write an article for Real Money. Click the "+Follow" next to my byline to this article.
TAGS: Mergers and Acquisitions | Investing | Stocks | Technical Analysis | Trading | Digital Entertainment | Media